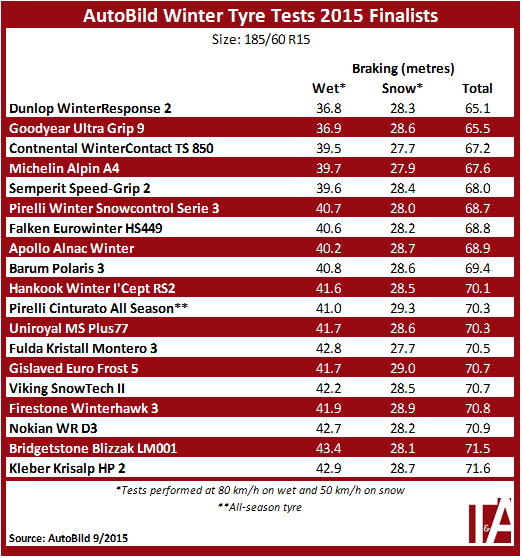 In its annual winter tyre performance survey, German motoring publication AutoBild narrows a wide field of 49 winter tyres and two all-season tyres with wet and snow braking measurements before conducting a full test of a range of characteristics. 19 tyres made it through to the 2015/16 season test, conducted using the tyre size 185/60 R15.

While others made it past this 44m mark, only the best 19 with the shortest total braking distance on wet and snow-covered roads (measured at 50km/h) made it through to the full test of 16 individual disciplines – including handling, traction, aquaplaning safety, noise, and rolling resistance. In this second round, the BFGoodrich g-Force Winter, Goodyear Vector 4Seasons, Kumho Winter Craft WP51, Ovation W-586, Sava Eskimo S3+, Matador MP92 Sibir Snow, Sportivas SnowWin, Torque TQ022, and Yokohama W.drive V905 were also eliminated.

The tyres making it to the final were: