Bridgestone’s Blizzak LM005 tyre has won the Auto Express Winter Tyre Test 2020 beating 205/55 R16 tyres from seven other manufacturers to the top of the table. Auto Express cited the tyre’s performance in the wet as a key factor. The tyre, which boasts an ‘A’ tyre label grade for wet grip across the full range, has secured Bridgestone’s first Auto Express test win and follows on from a series of improved results in recent times. However, there were strong performances from Hankook’s Winter i*cept RS2 (2nd) and Michelin’s Alpin 6 (3rd).  At the same time, we have to note that Hankook, Goodyear and Dunlop each won individual categories as well as Bridgestone, of course. Looking forward, Continental’s TS 870 has to be described as the one that got away because it’s market-beating performance couldn’t be counted owing to the fact that the Covid-19 pandemic has delayed the new tyre’s release for a year.

Irrespective of the strong performance of its competitors, nothing should take away from Bridgestone’s 2020 win. Indeed, Auto Express stated: “Thanks to standard-setting wet performance, the Blizzak is an ideal tyre for British winters, which see far more rain than snow on the road. It was its superb performance in the wet tests that set up the Blizzak to take an overall win. It’s the only tyre on test with an ‘A’ rating and, while label ratings don’t always match our results, they do here. It took three wins and two runner-up positions in the wet tests.”

The Auto Express win was the Blizzak LM005’s second success in a matter of after it triumphed in ADAC’s 2020 winter tyre test, impressing with its balanced performance on dry and snow-covered roads, and handling in the wet. Bridgestone reports that it developed the Blizzak LM005 to bring drivers peace of mind and convenience. Drawing on research of 20,000 drivers across Europe, the product was reportedly created with “a strong insight into the expectations and real challenges they face…”. Tested by TÜV SÜD it has already been ranked in the industry’s top two for snow braking, snow traction and ice braking performances.

Bridgestone North Region marketing manager Andy Mathias said: “This result is the culmination of a great deal of hard work when designing and testing the product that would offer peace of mind and confidence in all weather conditions. The halo effect of being an Auto Express test winner will benefit us when communicating the performance of the LM005 – and will reflect favourably across our other product ranges, too. We’re thrilled to read of its success.”

The Blizzak LM005 is currently available in 171 dimensions for passenger cars and SUV/4x4s from 14 to 22 inches. Bridgestone’s DriveGuard Run Flat technology has been integrated into 24 high-demand dimensions (16 to 18 inches) of the Blizzak LM005.

Strong competition at the top of the market

While Bridgestone is this year’s Auto Express winner and while Continental has thrown down the gauntlet for next year, these brands’ products weren’t the only tyres to stand out at the top of the market. Hankook’s Winter i*cept RS2, for example, won the wet circle test and came second in wet handling by the slightest of fractions, taking second place overall. The third-placed Michelin Alpin 6 should also be lauded for its “well-deserved” second consecutive podium position. Meanwhile, the Goodyear UltraGrip Performance + led the field both in terms of curved aquaplaning performance and snow traction. The Dunlop Wintersport 5 also took a brace of category wins, with first place in snow braking and cabin noise – all proving that there is stiff competition at the top of the market.

The podium aside, positions four, five and six were incredibly close together, separated by just 0.2 per cent. The fourth-placed Pirelli Cinturato Winter was noted for its snow capability, while the fifth-placed Goodyear Ultragrip Performance + was lauded as “great on the snow”. However, as it was within 0.4 per cent of the podium and 0.2 per cent of the Goodyear and Pirelli tyres, sixth position probably doesn’t do the Falken Eurowinter HS01 justice.

Summarising the Eurowinter HS01’s results Auto Express said: “Your choice depends on your priorities: Falken is the one for dry grip.” Consistently described as “progressive and easy to control”, Falken’s tyre was also cheaper than four of the five higher-placed rivals. the Eurowinter HS01 has also received praise in the Austrian ÖAMTC and Swiss TCS tyre tests. Having said that, it was the weakest of the eight tested tyres in the snow and in wet braking.

Continental TS 870: It would have been a contender

At the start of 2020, we gave the market a detailed preview of the Continental WinterContact TS 870, describing it as the leading German tyremaker’s “successor to its winter tyre test champion”. However, while we were told at that point that the tyre would be hitting the market around now, that was before the coronavirus pandemic. As a result, we have to expect the tyre’s official market release in roughly a year’s time. Having tested the tyre in time for the magazine’s 2020 winter tyre report, Auto Express described the tyre as: “potentially a champion in waiting”.

Auto Express tyre tester Kim Adams explained why the TS 870 can’t be crowned just yet: “We couldn’t include the Continental WinterContact TS 870 in our overall ranking because, although the tyre was due to go on sale this winter, the pandemic has put its release back by a year. However, Continental can take some consolation from having provided the best tyre.”

Therefore, the WinterContact TS 870 not only could have been a contender, Conti, it would have won this year’s test. And, based on this performance, it is in pole position to win next year’s title. 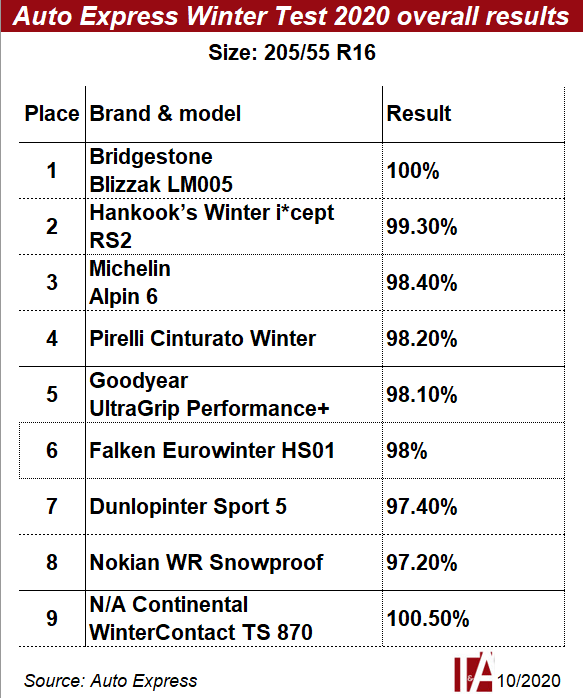