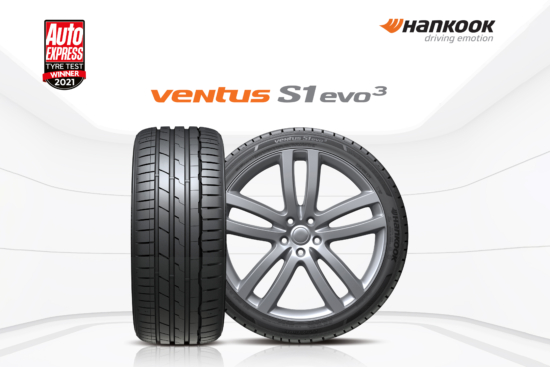 After a Covid-enforced delay, Auto Express has published its 2021 Summer Tyre Test, with Hankook leading a list of ten top tyre brands. Each of the ten tyres* displayed strengths in at least one of the test segments. The UK magazine used Continental’s Contidrom proving ground near Hanover in Germany to conduct its objective performance tests, enlisting the help of a local independent tyre tester to get around travel restrictions in the country before verifying the results. The problems of testing tyres in Europe with rules around travel in flux also affected the way Auto Express was able to get tyres to the proving ground; rather than acquire tyres on the open market, it asked manufacturers to send sets, verifying the test-topping tyres against regular production models after the fact. The magazine used the size 225/45 R17, as it had previously in 2018 – a very popular UK size for compact to medium-sized family cars, and in this case one fitted to the tyre test mainstay Volkswagen Golf. Wet and dry tests made up the majority of the overall marks, though the magazine said it weighted tests only to ensure no single test tipped the balance of power disproportionately. This can happen when performance gaps are exaggerated – Auto Express says aquaplaning exemplifies this – and in this test the overall gap between the tenth-placed tyre and the top was not large. As well as performance tests in the wet and dry, Auto Express measured noise from inside the cabin at 100km/h driving on smooth tarmac, fuel economy via standard industry tests, and took pricing data from the test’s sponsor, online tyre retailer, Blackcircles.com.

Auto Express made the Hankook Ventus S1 evo 3 the winner of this year’s test. The ultra-high performance tyre topped the table primarily by scoring 100 per cent in wet braking. Particularly eye-catching was how quickly the Hankook tyre stopped on wet roads: “To finish two meters ahead of the next-best – which was still doing 13 mph when the Ventus had stopped – deserves noting. It was not just in a straight line where the Hankook excelled; it was good on the wet handling circuit, marrying strong front-end performance with a grippy rear. The balance was good, with precise steeling allowing secure progress through the turns on the throttle. It also worked well in the deeper water aquaplaning tests.”

The Hankook performed well in dry braking too, with a second-place finish in that discipline. The tyre was a way off the most expensive in the test in only fifth place. Its only weaker points against this opposition were the tyre’s rolling resistance and cabin noise in which it finished joint-seventh and eighth respectively. The margins were very small in the latter category – the Hankook was only 1.1 per cent noisier than the top-rated tyre – while the tyre’s fuel economy was some way off a clear front-runner, but comparable with most of the rest of the field.

Blackcircles.com added that the tyre “has proven to be a very popular choice with customers, with reviews frequently commending the tyre’s grip, excellent road handling and overall performance.”

Sanghoon Lee, president of Hankook Tire in Europe said: “We are delighted with the result in the latest summer tyre tests by Auto Express. The Ventus S1 evo 3 has already received a Highly Recommended accolade in the Tyre Reviews 2021 UHP tyre test and this latest award underlines our commitment to providing drivers with excellent handling throughout powerful acceleration as well as excellent wet braking performance.”

Taking second place in the Auto Express test was the Michelin Pilot Sport 4, a veteran of this test, having won at its first attempt in 2016. While other tyres that have been successful in past Auto Express tests have slipped down the order, the Michelin showed very well-rounded performance. The magazine suggested that the only areas in which the pattern showed its age were in fuel economy, a category in which Michelin finished a slightly surprising last place, and in cabin noise (also last, but within 2 per cent of the best).

Auto Express said the tyre “was rarely off the podium across the tests, apart from cabin noise and fuel economy. Long gone, it seems, are the days when the Michelin design philosophy was impressive fuel economy at the expense of wet grip.” It also praised the Michelin for the way it transmitted power to the road in the wet and for its balance. Though “it failed to match the sharpest” tyres in the dry, Auto Express said the tyre “held on well without needing excessive lock.”

Meanwhile Blackcircles said that the tyre was “consistently a firm favourite with customers,” yielding particular praise for “grip, comfort, and handling.”

In third, and also recommended by Auto Express in 2021 was the new Vredestein Ultrac UHP summer tyre. The tyre was ranked first for wet handling performance, and was the only tyre truly to keep pace with the winning Hankook tyre in the most safety-critical conditions. The Ultrac was launched earlier in 2021, produced by Apollo Tyres in the Netherlands.

Auto Express said the tyre had shown “improvements both in the wet and dry over its predecessor. The performance is pretty well balanced between the two surfaces, with a great win in wet handling. [There, the Ultrac is] a step ahead of the competition around the handling track, and from behind the wheel it was no surprise that the Vredestein took the win, because it gripped where others just skated across the soaked surface.”

The magazine added: “Front grip was impressive, and was matched by a stable rear that gave the car a great balance through turns.” In conclusion, Auto Express said it was: “an impressive debut for the new Ultrac,” and that “a solid string of results, especially in the wet, helped to put the Ultrac on the podium.”

Yves Pouliquen, sales & marketing director at Apollo Tyres Europe, commented: “We have great respect for Auto Express and its testing procedures and so are enormously proud of this latest accolade for the Ultrac. This new product builds on over two decades of development and represents a significant leap forward for handling, comfort and noise reduction in the summer tyre market. Our R&D engineers focused on creating a tyre that offers class-leading performance, superb comfort and outstanding looks. It’s great to see those efforts endorsed by highly respected independent testing.”

Vredestein’s R&D team used next-generation tread compound technology to give the new Ultrac 10 per cent better braking than its predecessor on dry and wet surfaces. The tyre benefits from a 50 per cent increase in traction-enhancing silica and resin compounds, combined with multifunctional polymers. Comfort was another key priority, and the company set out to optimise the driver experience. Shock absorption is enhanced by reduced apex height, optimised sidewall construction and increased flex zone to deliver a quieter ride. In addition, the pitch sequence of the tyre has also been optimised at different tyre diameters to increase acoustic comfort.

Blackcircles’ comments were perhaps the only real dampener for Vredestein, with the online retailer saying the tyre “isn’t a big seller” (with results like this from the third-cheapest tyre in the test, perhaps it should be) – though the e-tailer’s customers have highlighted the tyre’s “longevity”. 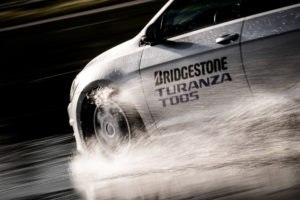 The Bridgestone Turanza T005, which was placed fourth in the test gave a dazzling fuel economy performance that no other tyre in the test could get close to matching. The tyre is an interesting selection for this test, since it is Bridgestone’s tyre more focused on summer touring characteristics – Bridgestone’s Potenza S001 may have been a closer match. As the magazine noted, the Bridgestone is W speed rated rather than rivals’ Y, and as a result the tyre is a relative lightweight in this UHP segment company. The tyre weighs “around 750g less than the next lightest,” Auto Express said.

While the magazine praised the Bridgestone tyre’s “four per cent fuel economy advantage over the next best,” it opined that the wet grip trade-off was noticeable: “It needed seven metres more to stop than the winning Hankook and five more than the next best. It was also doing almost 23mph when the best had stopped, which is a concern,” the magazine said. Auto Express also found the tyre to be less compelling on the dry circuit, where it compared less favourably to the tyre immediately below it. The test concluded that the tyre may appeal to high-mileage drivers, though in contrast Blackcircles’ customer reviews praised “low noise levels and performance in the wet and dry.”

Former winners of this test, Goodyear’s Eagle F1 Asymmetric 5 and Continental’s PremiumContact 6 had “little to choose between them” in the 2021 edition, finishing in fifth and sixth places respectively. The Goodyear offered “balanced performance in the wet and dry,” Auto Express said, calling the tyre “good to drive.” As a result, fuel economy suffered in this test.

The Conti tyre meanwhile “remains a good tyre,” according to Auto Express, though it is relatively expensive (the second-most costly in the test). At almost 5 per cent weaker than the best tyre in wet cornering, Auto Express ultimately came to the conclusion that “a replacement is needed to put Continental back on top in this sector.” Conti launched a new U-UHP tyre in the same week the Auto Express test was published (the SportContact 7), so a seventh generation of the PremiumContact line may soon follow.

Though it was significantly cheaper than most other tyres on the test, Nokian’s Powerproof had no particularly glaring weaknesses, though it also failed to impress in any key performance category, save maybe wet cornering, in which it was third. It was also low-noise, though no tyre disgraced itself in this part of the test. 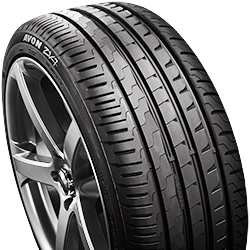 If one tyre came in for particularly pointed criticism from Auto Express, it was the Pirelli Cinturato P7. The magazine said that the tyre produced results that were “not what we’d expect from a tyre by the Formula One supplier.” Following its joint-last finish in the 2020 edition of this test, the tyre moved up a spot, but has simultaneously “fallen further away from the winning performance because last year it was just 1.6 per cent off first place,” Auto Express said. The magazine summarised: “Last year we said the P7 would need refining. It’s clear that still needs to happen, because its wet-weather performance needs improvement.” The good news for Pirelli came from Blackcircles, which said in general the tyre has been “well received” by customers.

The British Avon brand – owned by Cooper Tire, and therefore by extension Goodyear – finished in ninth position with its ZV7, though Auto Express noted that its performance is “closing on its rivals”, and that the tyre had gained notably, finishing one place better off than in its previous appearance. The cheapest tyre in the test and the only truly mid-range brand, Avon can take heart that it is not a long way off the performance of premium tyres in this size, though the all-round picture remains decisive versus the best premium brand competitor products. Notably, the ZV7 has improved its wet performance to match the tyres from Bridgestone and Nokian, surpassing the Pirelli and Dunlop tyres in the test’s damp tests. It is also popular with Blackcircles consumers, who praise the tyre’s grip (its dry and wet handling were 1.1 and 2.6 per cent off the leading products on test).

Bringing up the rear in Auto Express’s rankings was the Dunlop Sport Maxx RT 2, a tyre that has been an excellent performer for a long time but is now beginning to suffer by comparison to its newer peers, being the oldest tyre on the test. In the market segment represented by this size – largely comprising vehicles used for everyday motoring, its fuel economy label rating of E is the best indicator of where it lags, as premium car tyre development since its launch has tended to reduce rolling resistance without compromising significantly on wet grip.

*(Update (27/9/21): Auto Express had yet to publish details of the Dunlop’s performance in its online tyre test feature at the time of publishing. It was previously missing from this article.)