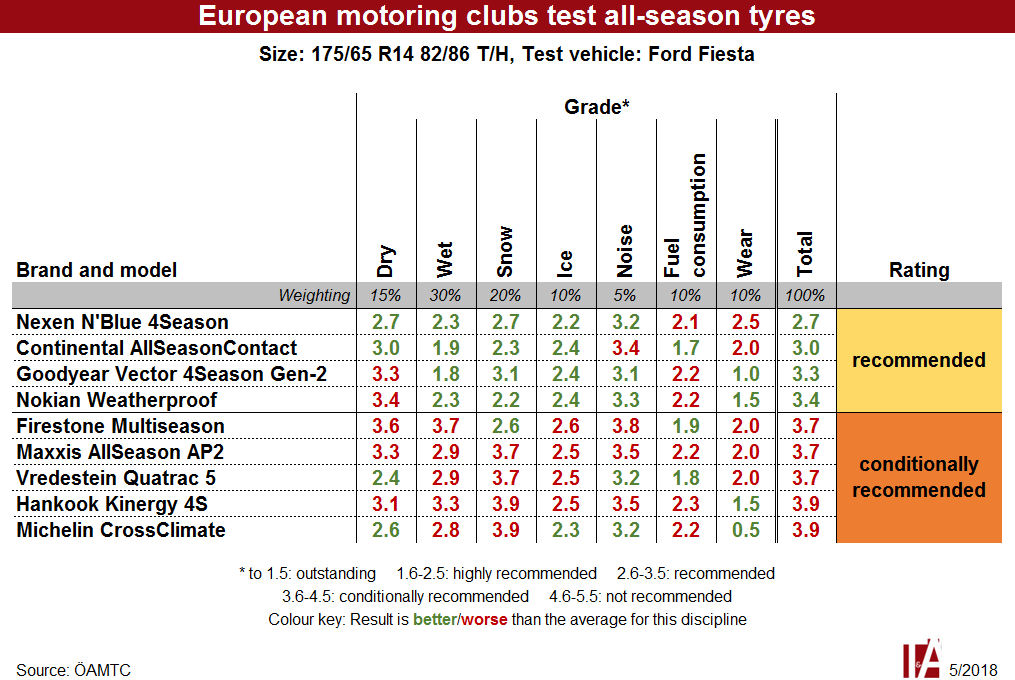 Three motoring clubs in Europe – Germany’s ADAC, the ÖAMTC in Austria and Switzerland’s TCS – have published the results of their joint all-season tyre test. The trio put nine 175/65 R14 82/86 T/H tyres through their paces, with dry testing taking place in the summer, the disciplines in autumn and ice and snow testing during the winter months.

Testing conducted under dry conditions contributed 15 per cent towards the total result while wet and snow/ice performance each accounted for 30 per cent of the total. The remainder reflected performance in fuel economy, wear (each ten per cent) and noise (five per cent) testing.

With a total score of 2.7 (lower scores reflecting a better result), the Nexen rubber finished the test in first place. The motoring organisations’ test team found the N’blue 4 Season to be good in wet conditions even though it displayed slight weaknesses on dry roads and in the snow.

The Continental AllSeasonContact, scoring 3.0 points, was praised for its fuel economy and performance on snow and, particularly, in the wet. However, the runner-up lost marks for its behaviour on dry road surfaces.

With a score of 3.3, the Vector 4Seasons Gen-2 was considered the best tyre in the wet and a good performer in the tyre wear test, yet the motoring clubs found weaknesses in the Goodyear tyre’s dry and snow performance.

The last of the ‘recommended’ quartet gained a score of 3.4 and was the best-scoring tyre in the snow. The Nokian Weatherproof also faired well in the tyre wear test yet didn’t measure up to some of its rivals during testing in dry conditions.

The other five tyres were conditionally recommended.

The Firestone Multiseason was considered a good performer in the area of tyre wear but weak in wet and dry conditions, and some light weaknesses were observed on snow and ice; it was given a score of 3.7.

The Maxxis AllSeason AP2 also scored 3.7 and was deemed weak in the snow, with weaknesses on dry road surfaces as well as light weaknesses in the wet.

The third tyre a gain of score of 3.7 was the Quatrac 5; although best of the nine on dry road surfaces and delivering good fuel economy, the Vredestein tyre was weak in the snow and displayed light weaknesses in the wet.

Two tyres received a total score of 3.9. The first of these, the Hankook Kinergy 4S (H740), was good in terms of wear but was weak in the snow and showed weaknesses in the wet and dry.

The second, Michelin’s CrossClimate, gave the best result in the wear category, however the testers deemed it weak in the snow and also detected light weaknesses in the wet and dry.

The loser in the test, however, was arguably all-season tyres as a product segment. The three organisations (which represent motorists in countries that typically experience colder and harder winters than the UK) still haven’t warmed to the idea of a tyre for year-round use.

“Even though the results are better than those for the larger size tested in 2016, the mobility club can’t voice any general recommendation of all-season tyres, summarised Friedrich Eppel for Austria’s ÖAMTC. His advice to motorists wanting to buy all-season tyres is to select a tyre model that matches their own driving requirements: “Only then, when someone their strengths and weaknesses, can a tyre be used properly and safely driven on.”