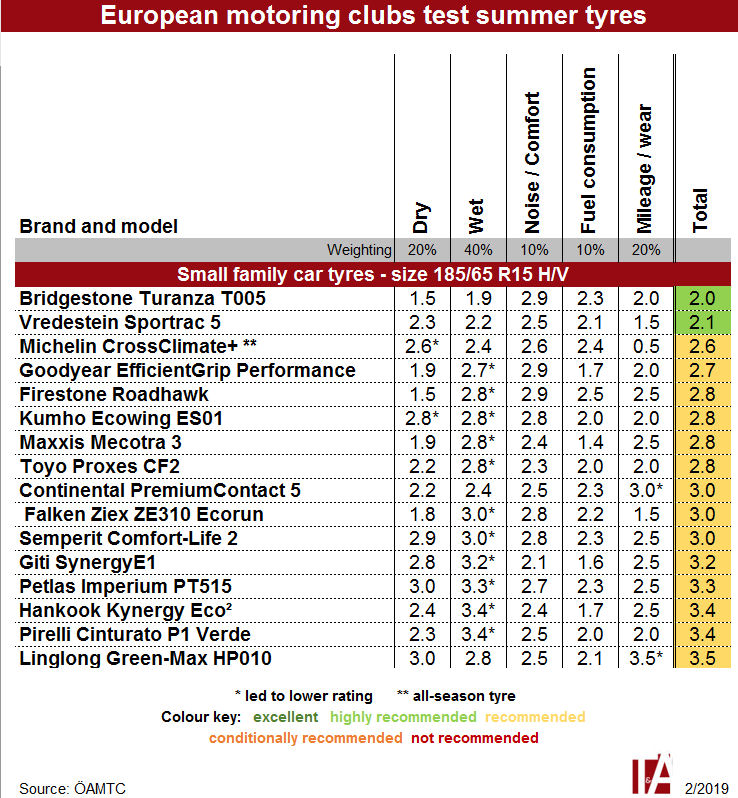 For their current summer tyre test, the main motoring associations in Germany, Austria and Switzerland (the ADAC, ÖAMTC and TCS) have looked at 32 products in total. Half of these were in the small family car size 185/65 R15 H/V, and the remainder size 215/65 R16C, tyres suited for use on vans, minibuses and campervans.

According to the ÖAMTC’s Friedrich Eppel, overall results for the car tyre test were satisfactory, with none of the tested 185/65 R15 models gaining anything less than a ‘recommended’ rating. The Bridgestone Turanza T005 took top honours in this test and the Vredestein Sportrac 5 was runner-up. These two were the only ‘highly recommended’ tyres amongst the 16 that were tested.

None of the size 215/65 R16 van tyres gained this lofty rating. Indeed, of the 16 tyres tested, nine were rated ‘not recommended’. The best result was achieved by the Apollo Altrust, but the test winner had to make do with just a ‘recommended’ rating. It shared this rating with four other tyres, the Goodyear EfficientGrip Cargo, Pirelli Carrier, Nokian cLine and Continental VanContact 200.

Not only did the Bridgestone tyre deliver the best wet grip performance in the 185/65 R15 car tyre test, tester Eppel reported that “the Turanza T005 is also – together with the Firestone Roadhawk – the strongest on dry roads.” The Sportrac 5, on the other hand, scored points for wear/mileage, as did the Falken Ziex ZE310 Ecorun. Both were surpassed in this discipline by the Michelin CrossClimate +. Overall, the testers found sizable differences in mileage potential between the 16 tyres; the Linglong Greenmax HP010 earned the wooden spoon in this discipline by managing just 26,000 kilometres before reaching a tread depth of 1.6mm, less than half the 57,000 kilometres achieved by the CrossClimate +.

But most of all it was wet weather performance that separated the top performers from the rest. Just four of the 16 tested tyres gave convincing accounts of themselves in the wet. These were the ‘highly recommended’ tyres from Bridgestone and Vredestein as well as the Michelin CrossClimate + and the Continental PremiumContact 5. 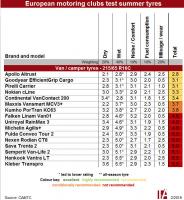 When evaluating the van tyres, the testers found the Apollo Altrust, Goodyear EfficientGrip Cargo, Pirelli Carrier, Nokian cLine and Continental VanContact 200 to offer the best compromise between dry and wet performance, comfort, mileage and fuel consumption. “Here we dealt with a classic conflict of tyre development objectives: Many of the tested van tyres were obviously designed for the longest possible service life and low fuel consumption. Good to very good results in these areas came, however, at the cost of weaknesses, some significant, in wet grip characteristics. The result was long braking distance and unstable lateral control in the wet,” commented Friedrich Eppel.

With this in mind, the testers urge prospective tyre purchasers to pay attention to what type of tyre they buy. Anyone who fits ‘C’ (commercial) tyres should note that their wet grip characteristics were markedly weaker in this test. An alternative for some vans would be to fit car or SUV tyres. “This may be the better option, at least for privately-used vehicles,” said Eppel.