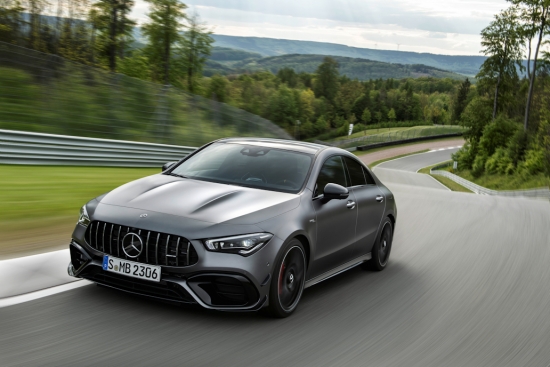 Hot hatches don’t really get much more sizzling at the moment than the Mercedes-AMG A 45 S, whose turbocharged four-cylinder engine produces a hearty 416bhp. As usual, four rubbery rings take on responsibility for transferring all this power to the road – but what’s the best tyre for this job? That depends upon the sort of driving you have planned.

Sport auto has attempted to bring some clarity to the tyre selection process in its summer 2020 test. The German performance car publication has evaluated ten tyre models – five from the UHP category, two even more ultra UUHP tyres and a trio of semi-slick/cup tyres. It chose 245/35 R19 for testing purposes, a size that in addition to being standard on the A 45 S is suited to sports saloons such as the Audi S4 and hot hatches like the Renault Megane RS.

The UHP tyres that sport auto looked at include the latest compound version of the Continental SportContact 6, the new Goodyear Eagle F1 Asymmetric 5, the Nokian Powerproof, Toyo Proxes Sport and Vredestein Ultrac Vorti. Taking the field for the UUHP category were the Michelin Pilot Sport 4S, successor to the Pilot SuperSport, and the new Goodyear Eagle F1 SuperSport. But as testing just two separate categories of tyre isn’t difficult enough, sport auto also fitted the A 45 S with race-oriented rubber, namely the Michelin Pilot Sport Cup 2, the new and affordable Giti GitiSport GTR3 and the Bridgestone Potenza S007 R.S. The testers examined each set of tyres’ performance in wet and dry conditions and also looked at rolling resistance and noise. They rated the final results according to category.

Finishing the test with a weighted 9.2 points out of a maximum possible average of ten, the Continental SportContact 6 was judged “unbeatable” and “phenomenal” in wet conditions. The tyre was no slouch in the dry either, with short braking distances and good steering precision. Minor criticisms include the Conti-shod test car’s sensitivity to changes of load when cornering in the wet, while rolling resistance was on the high side.

The Goodyear Eagle F1 Asymmetric 5 also shone in wet conditions, with the testers declaring it “extremely good-natured, easy to control and dynamic”. They experienced good aquaplaning safety reserves when cornering in the wet. The tyre was “forgiving of mistakes” yet agile on dry road surfaces. Rolling resistance and tyre/road noise were low and comfort levels high. The only complaint of note was a slight delay in steering response.

The Nokian Powerproof proved a grippy tyre in both braking tests. Steering was a little slow and imprecise when cornering in dry conditions, but the Nokian tyre compensated for this by being good-natured, with broad and predictable performance thresholds.Grip was less than optimal when cornering in the wet, however, and the testers reported some noise issues.

A ‘good’ rating for Vredestein

Although the Vredestein Ultrac Vorti wasn’t as grippy in the wet as its better-rated competition, it delivered no unpleasant surprises. Performance in dry conditions was tidy, with high levels of directional stability even when changing direction at speed. The testers also considered the tyre very quiet and comfortable. Shortcomings they reported include marked understeer and low grip during wet handling testing as well as only average aquaplaning protection. Rolling resistance was high.

The Toyo Proxes Sport was spontaneous in the dry and gave good directional stability. It offered good protection against sideways aquaplaning and was a quiet tyre. However, the testers refrained from bestowing the Toyo tyre a higher rating due to its performance in the braking tests as well as a lack of grip when cornering and severe understeer in the wet.

The Michelin Pilot Sport 4S didn’t require much tarmac to stop during the dry braking test and was very stable during fast lane changes. Good steering response and precision, together with strong grip, allowed for fast lap times in the dry. The Michelin tyre also gave well-balanced, neutral performance in wet conditions. But the testers noted limitations to lateral control when cornering in the wet and related issues in the aquaplaning test, and they thought rolling resistance was on the high side.

Braking distances for the Goodyear Eagle F1 SuperSport were short and the tyre offered a high level of driving stability. Its performance in the wet was “still acceptable” even if not the tyre grippiest tested. Some issues with aquaplaning were noted, and steering response was just average.

Sport auto considered the Michelin Pilot Sport 2 top for grip and precision on dry surfaces. Indeed, the testers gave the tyre a weighted ten out of ten result. Its performance proved typical of that expected from semi-slick tyres, and sport auto therefore doesn’t recommend it for use in the wet.

The Bridgestone Potenza S007 R.S. delivered very precise steering behaviour when warmed up and very good driving stability. It is also a very quiet tyre. Grip wasn’t quite up to Michelin levels though, and again there were issues in the wet. Rolling resistance was also high.

The testers called the Giti GitiSport GTR3 a “direct, active and affordable semi-slick/cup tyre”. As with the Michelin and Bridgestone tyres its performance in wet conditions was limited, and it only offered narrow reserves at the threshold of its performance. 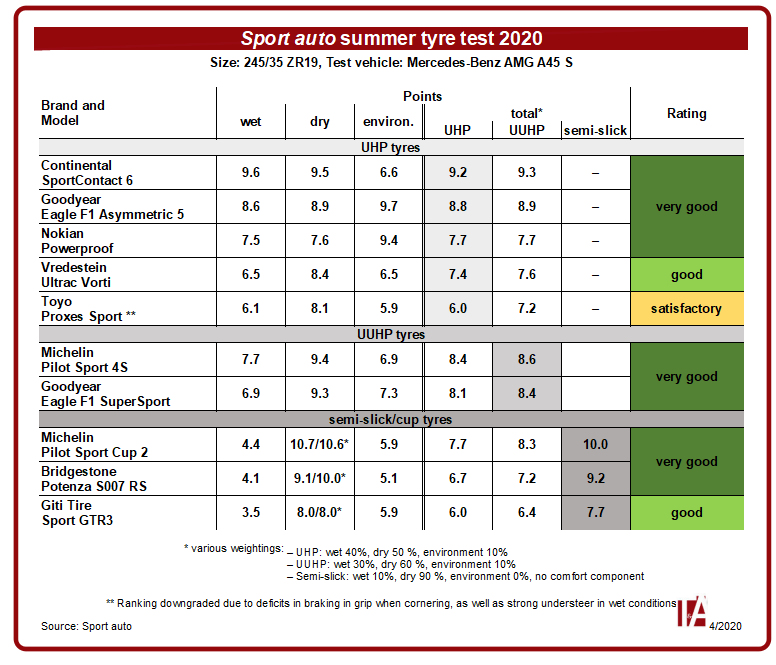 More than half of UK garages closed, similar figures across Europe