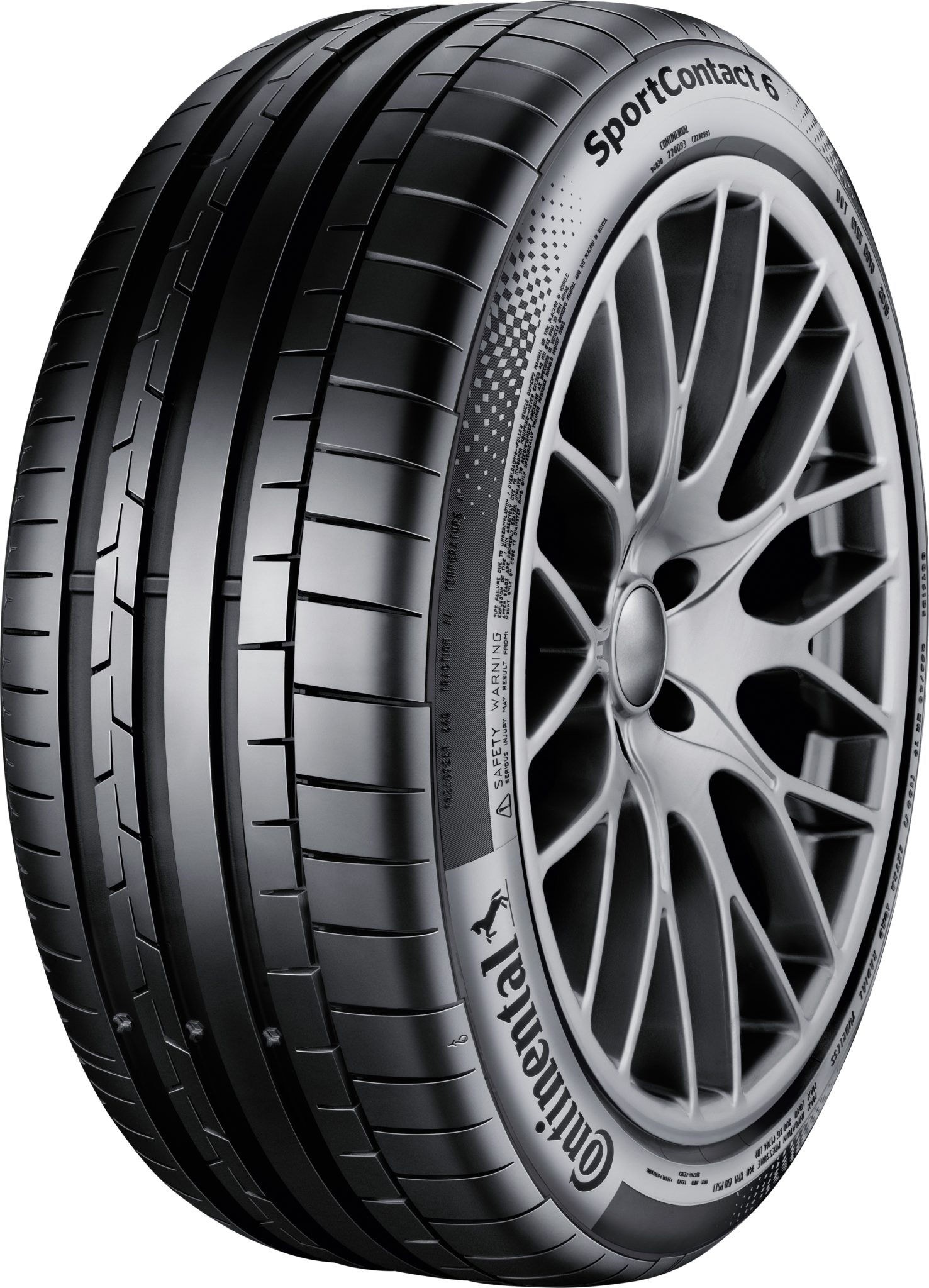 Continental’s ultra-high performance summer tyre, the SportContact 6 is currently available in a range of 101 articles, produced for rims with diameters of between 18 and 24 inches. The manufacturer states that the tyre is particularly suited to pure sports cars such as the Audi R8 or Porsche 911 as well as vehicles such as the BMW 5 Series or Mercedes AMG, due to its high-grip Black Chili compound, tread design, and Aralon 350 reinforced construction, which offers safe driving up to 220mph.

Black Chili is the name Conti’s current range-leading compound technology, giving its tyres optimal interaction with the road. To boost the performance of the SportContact 6 more, Conti chemists developed Black Chili with two particular features to ensure optimum adhesion when pushed to the limits. The rubber compound is designed to mesh with the roughness of the road. At the same time, temporary atomic connections between the tyre compound and the road surface ensure high adhesion, acting like small suction pads at nanoscopic level. Both factors make for the greatest possible adhesion in all directions – during braking, cornering, and acceleration on both wet and dry roads.

The tread features supporting blocks for precise handling and responsive steering performance, Continental’s tyre designers use force vectoring technology for optimal force transfer. This technology deploys different tread elements on the inside, outside, and centre of the tyre. Depending on the size of the tyre, three or four central ribs and the tyre’s inner shoulder ensure a maximum crosswise transfer of force, noticeably improving the direct translation of steering commands to the road. Because the outside of the tyre is subject to greater forces than the inside during cornering, the rib flanks are designed to be asymmetrical. This increases the stability of the ribs and allows greater forces to be transferred. When working on the outer shoulders, the tyre designers combined the different block elements to form one larger unit. Large tread blocks on the outside are connected with interlaced elements in a second row of blocks. This allows the tread blocks to support each other during fast cornering and offer optimum lateral force transfer.

The tyre’s structure was also adapted to run safely at extreme speeds and the associated enormous centrifugal forces on the tyre. To achieve this, Conti engineers designed an innovative structure using Aralon 350 material developed especially for the SportContact 6, Continental utilises a synthetic fibre in which two yarns made from strong aramid are closely interwoven with a yarn of flexible nylon. Implanted in rubber, this fibre is placed under the tread as a jointless cap ply. This complex structure acts like an additional steel belt and offers controlled, safe tyre contour behaviour even at maximum speed.

The first high-performance ContiSportContact tyre was released for sale in 1994, emerging from the press in sizes between 13 and 20 inches, as was the trend. Tuners and vehicle manufacturers, such as Audi, Porsche, BMW, Mercedes, ABT, and Hartge all used the sports tyre in their top models. It was successful enough to last seven years before a successor – the ContiSportContact 2 – was required, a development cycle that would today be unusually lengthy. The ContiSportContact range has won a number of independent tests and racked up more than 250 approvals from vehicle manufacturers and tuning specialists.