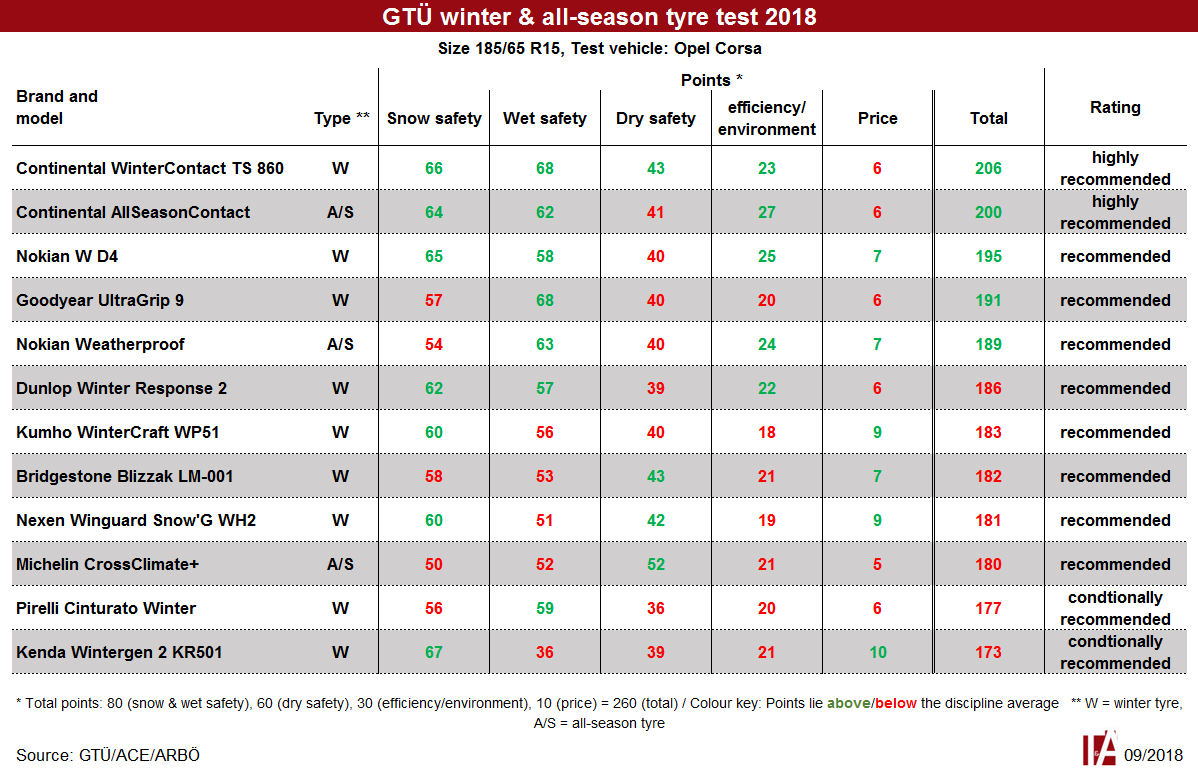 The comparative evaluation examined the popular small car size 185/65 R15, a fitment found on vehicles such as the VW Polo and Vauxhall Corsa. A total of 260 points was up for grabs – 80 points each for snow and wet performance, 60 for performance in the dry, 30 for environmental characteristics and ten for price.

First to the winter tyres, and from the nine tested the most impressive performance was given by the Continental WinterContact TS 860. GTÜ awarded the Continental winter tyre 206 points from 260 and commented that it “lay in the top group in all technical disciplines” and “convinced the testers for handling on wet, dry and snow-covered routes.” The WinterContact TS 860 delivered the (joint) best wet braking result, coming to a stop from 80 km/h in just under 34 metres. For its efforts, the Continental tyre was awarded a ‘highly recommended’ rating and named test winner.

Runner-up amongst the winter candidates was the Nokian WR D4. Despite exhibiting “slight weaknesses,” the Nokian winter tyre delivered respectable performance in all disciplines and topped the environmental category thanks to its low rolling resistance. GTÜ rated the WR D4 as ‘recommended’.

A total of six winter tyres were recommended. Finishing in third place with this rating was the Goodyear UltraGrip 9. Again, GTÜ observed slight weaknesses during its evaluation, however the Goodyear tyre kept pace with the WinterContact TS 860 in the wet disciplines, matching the Continental tyre’s class-topping 68 from 80 points.

Two winter tyres, the Pirelli Cinturato Winter and Kenda Wintergen 2 KR501, were given a ‘conditionally recommended’ rating. The Pirelli tyre lost points for showing “marked weaknesses on snow” and as its “braking distances on dry roads are long.” As for the Kenda, the test results were bittersweet. The GTÜ testers were impressed by the performance the Kenda Wintergen 2 delivered in winter conditions. While this most affordable of all tested tyres “convinced on snow-covered stretches” and, with 67 points out of a possible 80, won the winter testing category, the Wintergen 2 displayed “significant discrepancies” in its performance on wet road surfaces. The Kenda tyre’s 36 from 80 points in the wet category was 15 points behind the second-worst performance and sufficed for the wooden spoon.

Runner-up – but still deemed a compromise

All-season tyres are growing in popularity, yet these products still struggle to shake off the stigma of compromise. GTÜ doesn’t help here. Although noting improvements over previously-tested products, the all-season tyres participating in the current test were unable to “convince in all categories.” The testing organisation commented that its experience with current and past testing showed “instead of all-rounders, the tyres are actually rather a compromise.”

That said, one of the three all-season tyres GTÜ tested performed well enough to receive a ‘highly recommended’ rating and, when ranking all 12 tested tyres together, second place. This was the Continental AllSeasonContact. The testers opined that the AllSeasonContact “can keep pace with the winter tyres on snow-covered roads,” and the 64 points it gained in the winter disciplines was beaten only by the Continental, Nokian and Kenda winter tyres. The Continental all-season tyre also performed well in the wet, its 62 points only bettered by its winter stablemate the WinterContact TS 860, the Goodyear UltraGrip 9, as well as one of its all-season rivals.

This was the Nokian Weatherproof, whose 63 points in the wet testing gave it third place in the category. On the flipside, the GTÜ testers found the Weatherproof’s braking distance in the dry, and that of the AllSeasonContact, too long – at 48.0 and 46.7 metres respectively, both were akin to the winter tyres’ dry stopping distances.

Dry conditions are the favoured territory of the third all-season tyre, the Michelin CrossClimate +. It delivered a dry stopping distance of just 40.9 metres and, with 52 points from a possible total of 60, finished the dry disciplines nine points ahead of the second-placed tyre. But it was a different story when the weather turned south: The Michelin tyre received the fewest points in the winter disciplines and was ninth from 12 in the wet. GTÜ comments that the CrossClimate + is the “wrong choice for a winter holiday in the Alps.” The Michelin and Nokian all-season tyres both gained a ‘recommended’ rating.

A rating of ‘highly recommended’ and second place overall may seem a lofty endorsement of the Continental AllSeasonContact, yet in its test summary GTÜ repeats the sentiments often expressed by tyre makers. It states that there can be “no compromises when it comes to safety” – hardly an unexpected comment from Germany’s largest government-approved road safety testing and certification organisation. For tyres, this uncompromising stance on compromises means promoting a combination of good quality summer and winter tyres as the optimal choice: “All-season tyres continue to be a compromise for low-mileage drivers that could bring a car to a standstill in extreme weather conditions.”