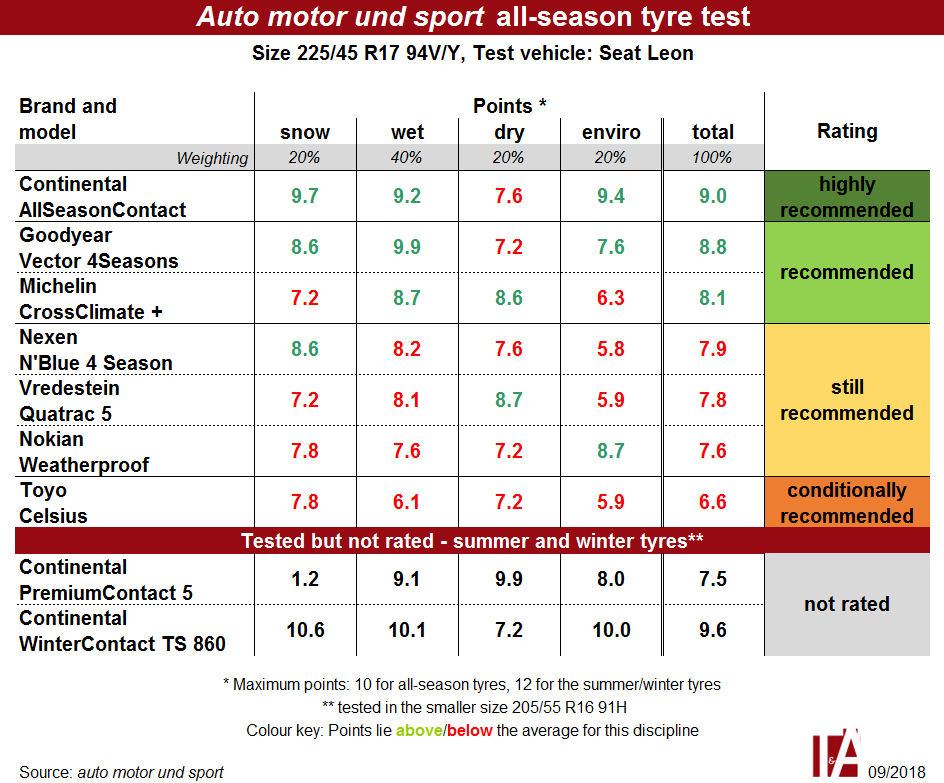 Tyre testers have labelled all-season tyres a ‘compromise’ purchase in past years for their inability to deliver the performance of both summer and winter tyres whenever the weather snaps its fingers and demands this. In its evaluation of the current generation of all-season rubber, Germany’s auto motor und sport harbours no illusions that such a compromise still exists. It wanted to know, however, whether the compromise can be effectively reduced through considered choice of product – the answer, the publication shares, is that it can.

The all-season tyre size chosen for testing is 225/45 R17 94V/Y, a larger than standard fitment for the Seat Leon employed as test vehicle – auto motor und sport wished to determine whether a larger-sized tyre could “compensate for some of the principal all-season disadvantages,” such as lower grip on snow and in the wet than winter tyres and lower adhesion on hot asphalt and higher wear than summer rubber. Seven candidates were selected for the auto motor und sport treatment. Testing including challenges in dry, wet, snow and environmental disciplines; snow testing took place in Finland and the other criteria was evaluated in Germany.

Winning the test with a ‘highly recommended’ rating, the Continental AllSeasonContact was judged to provide “surprisingly good snow performance, direct steering response and superb grip in the wet” as well as good performance in dry conditions. Minor criticism was levelled at what the testers considered “weak reserves of steer angle and unclear response on curved roads in the dry” as well as “drift angle noise when cornering.” Auto motor und sport noted that the AllSeasonContact was more strongly oriented towards winter conditions than summer (on a scale of 1 for a summer tyre to 5 for a winter tyre, it was given a 4) describing the Continental tyre as the best tyre “by far” in winter.

Two tyres were given a ‘recommended’ rating. Runner-up the Goodyear Vector 4Seasons was considered the “best all-weather tyre” of the bunch and the best in the wet. It was deemed “easy to control, stable and confident on snow, balanced in the wet, and well-behaved and superior on dry asphalt.” Points were deducted for a “somewhat sluggish steering response,” however the testers added that limits here were easy to measure. On the summer-winter scale of 1 to 5 used above, the Vector 4Seasons was deemed a 4.

The Michelin CrossClimate + completed the podium, gaining third place in the test thanks to being “good-natured” on snow and offering “above-average wet grip, very well-balanced wet handling” and being “direct, predictable and reliable” in the dry. Minuses for the Michelin tyre included “shortcomings in curved aquaplaning” and a “humming noise when cornering.” The Michelin gained a 3 on the summer-winter scale.

A further three tyres were rated ‘still recommended’. The Nexen N’blue 4 Season was judged to be an “agile tyre with good traction and lateral control on snow” as well as “well-behaved and understeering on dry stretches.” On the flipside, it was sensitive to load changes on snow and presented minor shortcomings in aquaplaning and also in lateral control and steering precision in the wet. Like the Continental and Goodyear tyres, it was given a 4 on the summer-winter scale.

Finishing just a whisker behind the Nexen tyre was the Vredestein Quatrac 5. Praised for “very good grip, the best steering response and high stability in dry curves,” auto motor und sport considered the Quatrac 5 the best performer overall in dry conditions. Furthermore, despite being considered “very close to a summer tyre” (2 on the summer-winter scale) and showing shortcomings in lateral control on winter snow, the Vredestein product was deemed “safe to drive” in such conditions. On the downside, the testers found the Quatrac 5 to be “sensitive to changes in load and indifferent in the wet.”

The Weatherproof from Nokian Tyres finished the test in sixth place. Its traction and braking on snow were considered good and its aquaplaning characteristics excellent, yet it also displayed “weak lateral control” and “unbalanced handling with strong oversteer” on snow as well as a lack of precision and sensitivity to changes of load in the wet. A slight drift angle hum was also detected. The Nokian tyre gained a 3 on the summer-winter scale.

Last place was reserved for the Toyo Celsius, the only tyre in the test to be handed a ‘conditionally recommended’ rating. While it showed a “stable and balanced driving behaviour on snow” and was “secure with light understeering on dry roads,” the Toyo tyre also presented “limitations in lateral control” as well as “a tendency to oversteer in the wet.” The Celsius was given a 3 on the summer-winter scale.

The Continental PremiumContact 5 summer tyre struggled in the snow tests. The Seat Leon test car only remained on the track with the help of “much sensitivity on the pedal and steering wheel.” Braking distances almost doubled, traction was virtually nil and the car struggled to maintain control in the slalom.

The winter tyre was of course in its element in the cold but also performed well at summer temperatures. In the wet, the Continental WinterContact TS 860 came to a stop from 80km/h in 31.8 metres, 3.9 metres shorter than the best all-weather performer, the Goodyear Vector 4Seasons, and 7.2 metres shorter than the Toyo tyre. The Continental winter tyre was a respectable fifth from nine in the dry braking test.

All-season tyres are gaining market share throughout much of Europe. Auto motor und sport notes that these products now hold a 16 per cent share of Germany’s car tyre aftermarket, a position obtained at the cost of summer tyres, whose share has sunk to 34 per cent. The publication attributes this trend to the prevalence of car purchases by leasing firms, rental companies and fleet operators; these account for almost three quarters of vehicle sales these days, it adds.

All-season tyres are increasingly finding favour amongst car purchasers, yet auto motor und sport’s test team still refrains from giving these products their unqualified recommendation. “For low mileage drivers (who drive) mainly in urban traffic in flat countryside or for application on rental cars or vehicle fleets, all-season tyres are – also for cost reasons – often without alternative,” writes auto motor und sport’s Thiemo Fleck. “However, a compromise remains, and our recommendation is to limit their disadvantages through (selection of) a larger size and a choice of product suited to requirements.”

For those who decide all-season tyres are the right fitment for their vehicle, auto motor und sport also recommends their purchase in the autumn: “The entire tread is then available during the winter season.”

Mann-Filter: OE quality for the aftermarket