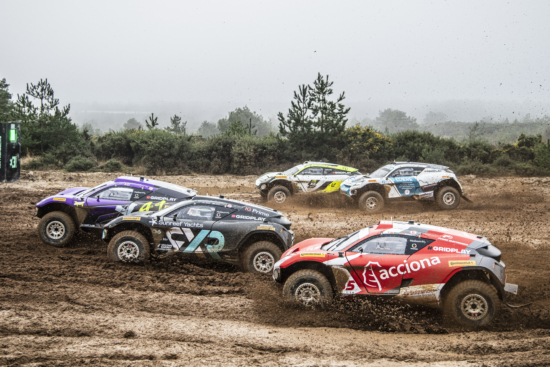 Arriving at Bovington Camp, a military base in Dorset, for the finale of the inaugural season of electric off-road series Extreme E, the lack of noise is the first indication that this is international motorsport done differently. When the nine fully electric 550bhp Odyssey 21 SUVs enter the arena, it is in large part to the sound of wet mud displaced by exclusive tyre supplier Continental’s Extreme E tyre, which is based on the German manufacturer’s CrossContact range. Primarily targeting a broadcast and internet audience, the teams, event staff, and small number of attendees on-site mingle under canvas, watching most of the action from the circuit unfold on big screens. During the races, teams complete the switch between the male and female drivers – another indicator of how Extreme E approaches motorsport differently – in front of this area.