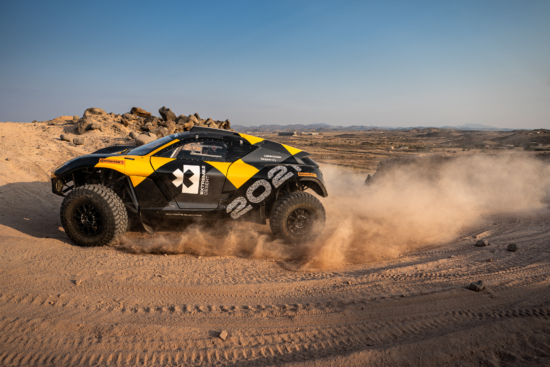 Continental is a founding partner and, from 2021, the premium sponsor of the Extreme E series. In this role, Conti will fit all race vehicles with tyres for the very challenging action. Indeed, according to the tyre and automotive supplier, Extreme E is the biggest challenge tyres have faced in motorsport. With this in mind, Nico Meier, product designer at Continental, talks about the challenges Extreme E tyres are exposed to in this unprecedented series, the importance of the tyre sidewall in general, and the sidewall design of the Extreme E tyre in particular.

Tyres & Accessories: What role does the sidewall play from a technical point of view?

Nico Meier: The sidewall plays a key role in the overall construction of a tyre in the truest sense of the word. Modern mid-size class vehicles now regularly have a permissible gross vehicle weight of 1,500 to almost 2,000 kilograms. The increasingly popular SUVs can be as much as three metric tons. That’s roughly the same weight as a full-grown hippo.

T&A: But not all the vehicle weight rests on the sidewall of the tyre, does it?

NM: No. In fact, the sidewall is actually the weakest component compared to the tread that connects the vehicle to the road surface – or the bead that holds tyres on the rim. In fact, it is for this reason we recommend you should never direct a pressure washer onto the sidewall at close range. It could cause damage. Fundamentally it is the internal inflation pressure that determines the carrying capacity of a tyre. A basic formula that can be used is “internal pressure x contact area”. In the case of tyres, different tyre constructions e.g. standard vs. XL adds an additional capacity of 10 to 15 per cent.

T&A: That sounds like a surprisingly simple formula. Is it really that simple?

NM: In theory, yes. The load capacity of a tyre depends largely on the internal pressure. The sidewall is the crucial element in the tyre structure. As a result, it also has an effect on the load capacity and can also compensate for lower pressures to a certain extent. For example, tyres with SSR technology (Self Supporting Runflat) have a reinforced sidewall. This means that even with total pressure loss, you can still drive at low speed to the nearest tyre retailer or garage. However, the crucial factor is the internal pressure. By the same token, this also demonstrates why too low an air pressure can become a fatal hazard. A large proportion of accidents caused by tyre failure are due to insufficient air pressure. It really makes sense to check the tyre pressures once a week.

T&A:So generally speaking, it would be better if the sidewall was designed to be more stable?

NM:A stable sidewall has advantages – and not just when it comes to pressure washers. In the case of tyres, however, everything is always connected to everything else, so the sidewall also plays a key role in the overall design. Together with the belt, it has a significant effect on the handling properties of a vehicle, among other things. A relatively stiff structure reduces the deformation of the tyre during power transmission – i.e. during acceleration, braking and cornering. This improves the handling characteristics and increases the possible cornering speeds. However, a tyre that is too stiff can no longer deflect, and thus has a negative effect on comfort, for example.

T&A: And why does the sidewall need a design?

NM: There are two main reasons for this. Firstly, legislation requires manufacturers to provide a lot of details on the sidewall. These are intended to increase road safety, among other things, by helping to prevent tyres from being fitted incorrectly or fitted to a vehicle that they are not suitable for due to size or performance capability. For example, tyres that are designed by the manufacturer based on the load capacity for small cars are completely unsuitable for a heavy-duty sedan in the premium class. Secondly, manufacturers link their own marketing strategic goals, such as brand presence and recognition, with the design.

T&A: What are the legislative requirements?

NM: These are primarily technical details such as tyre width, height-to-width ratio, rim diameter, load index, approved speeds. But also information on the intended use. For example, is this a summer, winter or all-season tyre? The production date is also included, the country of manufacture, and approval numbers. In the case of directional tyres, there is also an indication of how the tyre is to be fitted. To clearly separate the information required by legislator from the rest, the sidewall is divided into two zones: the inner and outer ring. The legally regulated elements are found in the inner ring. That’s the one closest to the rim. In terms of design, we have virtually no influence on this.

T&A: Which strategic aspects of marketing is your work focused on?

NM: As I mentioned, this is primarily about recognisability. Drivers who buy a tyre from Continental are purchasing a premium product of the highest quality, one which consistently takes top spot in independent tyre tests. So, it’s important to us that the origin of the tyre is apparent when you look at it. The brand logo and product name are therefore important design elements that should be recognised by the viewer straightaway. The sidewall is supplemented by special design elements. These highlight important properties of the tyre, visualise areas of application, and underline the uniqueness of a product. 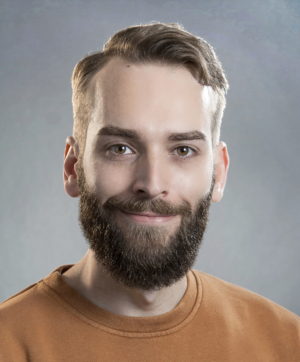 T&A: You also designed the tyres that are supplied exclusively by Continental to the teams in the new Extreme E racing series. What distinguishes this tyre from conventional tyres?

NM: The tyre is exposed to much larger loads during the races than any other tyre. This is due firstly to the vehicles used. The specially-developed ODYSSEY 21, which is driven by all of the teams, is an extraordinary vehicle which is roughly similar to commercial SUVs in length, width and weight, but with its electrical equivalent of 550 HP has three times the torque of the Formula E Gen 2 vehicle. Secondly, the races do not take place on standardised racetracks with comparable road surfaces, but in a natural environment with varying and very different surfaces: sand, scree, mud, ice, to name but a few. Added to this is the general race situation with extreme accelerations, sharp braking manoeuvres, high speeds, even on tight corners, drift movements, and even jumps. We are dealing with the biggest challenge that tyres in motorsport must face. With the help of ContiPressureCheck technology, tyre data such as the air pressure and temperature should therefore be displayed on a screen in the cockpit during the race for the drivers, so they can adapt their driving style in extreme situations.

The challenges on the tyres are very different from race to race, because the venues are so different. Sometimes it’s through the desert, another time through the rainforest or even the Arctic.

T&A: Are there bespoke tyres for each race?

NM: No. Using the tried-and-tested Continental CrossContact, we have developed a tyre that should work at all event locations and in all conditions. So, there’s no special desert tyre, or a special polar tyre. Nor is it the intention to fit new tyres for every start. This would not be in line with the sustainability requirements of the racing series.

T&A: Are there legal requirements for the sidewall design for these special products?

NM: No. However, the tyres for the Extreme E racing series also have some important information on the edge of the rim – for example, “Only for racing,” so it is clear that this tyre cannot be purchased commercially. Since this inner ring is correspondingly small, we have more space for individual design. This is a rare stroke of luck that we have to capitalise on.

T&A: The Extreme E tyres have quite colourful sidewalls…

NM: The design of the tyre is divided into four zones. One zone contains the Continental logo, another the product name CrossContact – both in Conti yellow. In between are zones with multi-coloured structures. This colourfulness is a striking contrast to conventional tyres. We decided on this for two reasons. Firstly, unlike products in the retail sector, these tyres will rarely be seen at close proximity. Thanks to the coloured highlighting, we achieve improved visibility at greater distances and on digital media. And secondly, with the colour of the design elements, we want to reflect the extreme and breath-taking natural landscapes in which the races are held. Green is the colour of the rainforest, yellow stands for desert sand and sandstone mountains, blue for the ocean, and white for the Arctic. In addition, we have created a 3D effect that gives the elements the appearance of a protective layer – similar to a dragon’s skin or a lizard’s scale armour. In doing so, we highlight the extremely robust and resilient character of the tyre. During the races, the rotation creates a fascinating flow effect.

T&A: Where does the colour come from?

NM: For this, we use post-cure technology. In this process, labels with coloured elements are printed onto the sidewall of the tyre afterwards. As a designer, this process provides me with all-new possibilities to visually present information about the product. A specially-developed colour mixture is used for the labels, which is characterised by strong adhesion to the tyre and is therefore well suited to the racing series.

T&A: A racing tyre is subject to more extreme loads than an ordinary tyre. Did you have to take this into account in any way in terms of design?

NM: The extreme loads result in the tyre undergoing relatively high deformation during the race. This also results in significant temperatures. We cannot rule out the possibility that the design elements will be damaged. Especially since abrasions are also possible in the event of unintentional contact with the vehicle’s surroundings. We are therefore developing special repair kits for the sidewall design which we can use to restore tyres that were only visually damaged during the races, on location between the individual stages. However, the final concept for this has not yet been determined.

T&A: Could the colouring process also be used for conventional series products?

NM: Yes. That could be done without making any changes. We can imagine it being used in particular in “special interest” tyres, such as all-terrain tyres or racing tyres with road registration. Standard tyres will certainly also shine in plain black in the future. 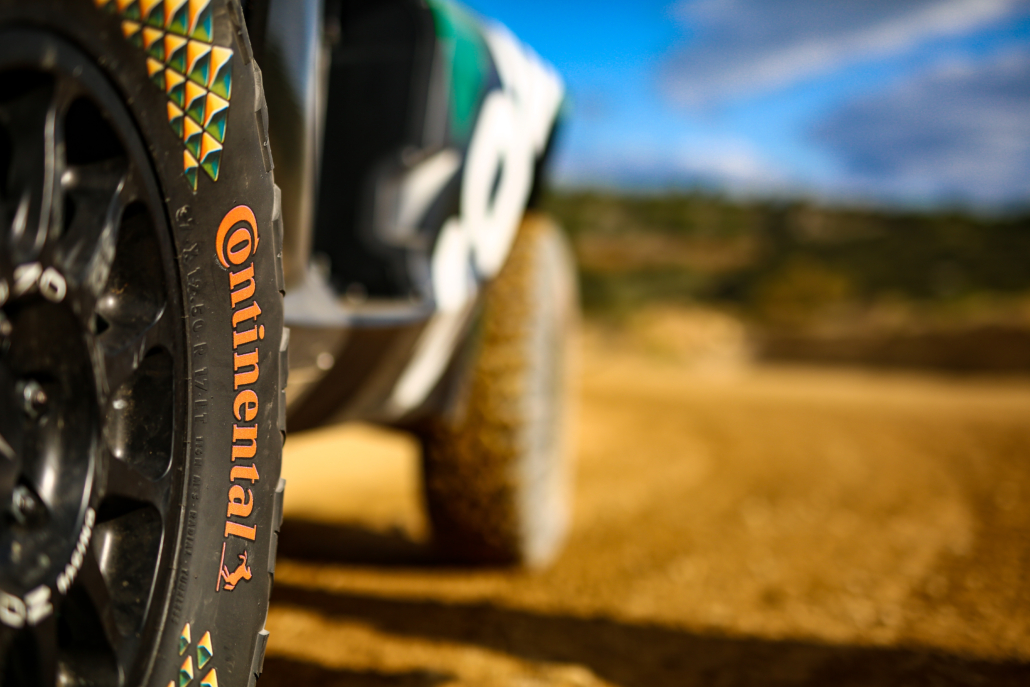