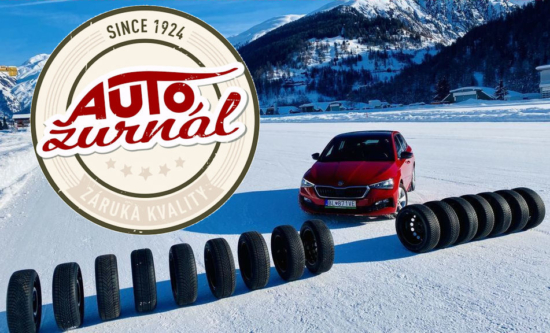 Autozurnal looked at a total of 15 size 205/55 R16 premium, mid-range and budget tyres. The testers fitted these to a Skoda Scala and subjected the tyres to braking and handling tests in wet, snowy and dry conditions. Wet and snow tests each accounted for 35 per cent of the total result, and testing in the dry the remaining 30 per cent. All tyres were scored against a reference, the Goodyear UltraGrip 9 winter tyre. Autozurnal gave the Goodyear tyre a score of 100 per cent in order to provide a point of comparison in each test.

The AllSeasonContact impressed with a very balanced performance and safe wet-weather properties. It also delivered the best performance in the aquaplaning test. The Continental tyre’s overall wet test score of 99.3 per cent was unmatched by any of the tested all-season and winter tyres aside from the Blizzak LM005 and the Goodyear reference. It delivered a respectable score of 103.4 per cent in dry testing and a score of 96.8 per cent in the snow tests. The AllSeasonContact achieved an overall score of 99.8 per cent.

The Bridgestone tyre was unbeaten in wet conditions, achieving a score of 103.4 per cent. The Blizak LM005 also beat the reference tyre in the dry, achieving a score of 102.8 per cent. Bridgestone’s own all-season tyre soundly beat it here; the WeatherControl A005 scored 106.9 per cent. The Blizzak LM005 scored 97.0 per cent in snow testing, a result bettered by three of the tested winter tyres as well as the Goodyear Vector 4 Seasons Gen-2 all-season tyre. The Blizzak LM005 achieved an overall score of 101.0 per cent.

The Goodyear reference tyre and two Michelin tyres also achieved a ‘very good’ rating. The Michelin CrossClimate+ finished the test with an overall score of 99.3 per cent, performing particularly well during testing in dry conditions. The Alpin 6 scored 98.6 per cent and was thus the third-highest scored winter tyre.

While Autozurnal gave none of the tested tyres its the lowest rating of ‘deficient’, the testers were less than enthusiastic about with two of the tyres in the test line-up. They rated the Imperial Snowdragon UHP (91.7%) winter tyre and the Kormoran All Season (92.6%) as ‘bad’ tyres. 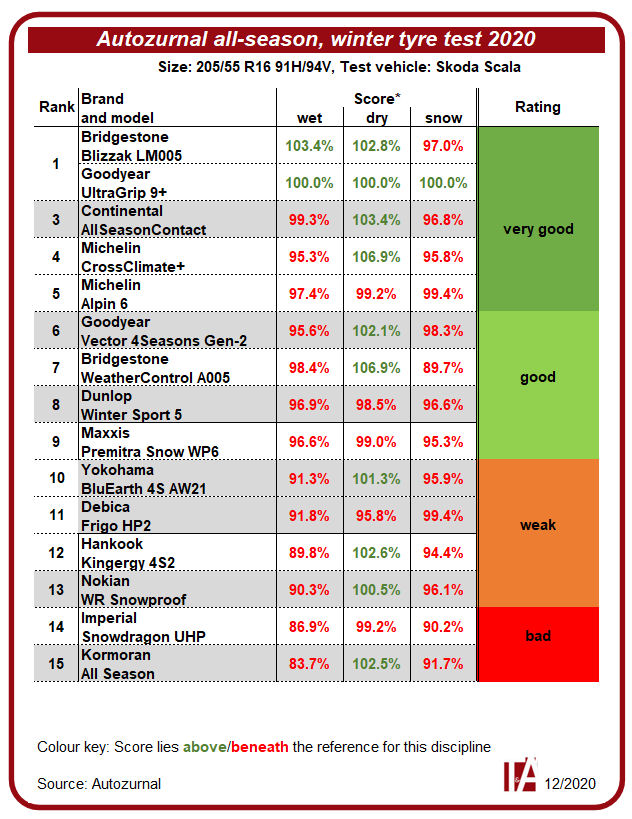