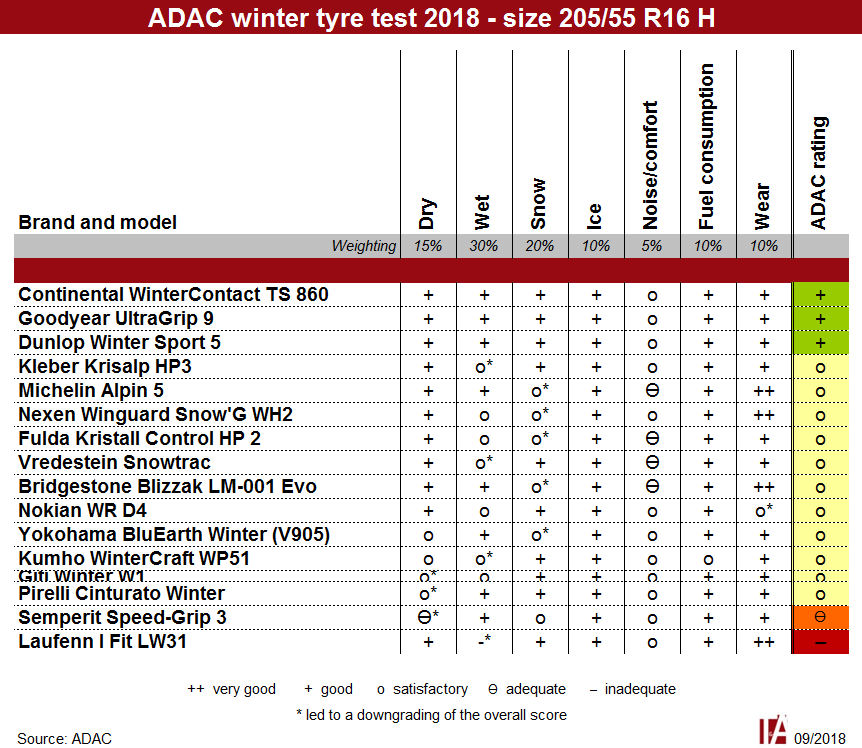 September has been packed with tyre tests, with Auto Express, Auto Bild, GTÜ and auto, motor und sport all publishing comparative evaluations of winter and/or all-season tyres. German motoring association ADAC has come to the party with not one, but two winter tyre tests.

What the ADAC found is that “expensive tyres aren’t necessarily good tyres.” Elaborating, the motoring organisation comments that the most expensive tyre in the test, the Michelin Alpin 5, finished in fifth place with just a ‘satisfactory’ rating, while the fairly pricey Pirelli Cinturato Winter ended 14th, behind tyres costing up to almost a third less. That said, the 205/55 R16 91 H test also delivered a measure of getting what you pay for, with the cheapest tyre in the test – the IFIT LW31 from Hankook Tire’s second brand Laufenn – snatching the wooden spoon with a rating of ‘inadequate’ due to its poor performance in wet conditions.

Continental has taken its regular place at the victor’s table. The winner of ADAC’s 15-inch winter tyre test in 2017 as well as top dog in this year’s Auto Express, auto motor und sport and GTÜ tests (not to mention past glories with Auto Express and Auto Bild) was a winner here as well. Thanks to its best-in-test wet weather and fuel consumption performance, the Continental WinterContact TS 860 gained a ‘good’ rating (no tyre tested received ADAC’s highest rating of ‘very good’ – the motoring organisation comments that this rating exists to accommodate an anticipated improvement in tyre performance in future tests). The ADAC testers also found the Continental tyre “particularly good on snow.”

Continental’s win was shared with Goodyear. Proving a match for wet performance and also achieving a (joint) best-in-test result for this discipline, the UltraGrip 9 also impressed on dry surfaces and on snow, and gave good fuel consumption.

UltraGrip 9 sibling the Dunlop Winter Sport 5 wasn’t far behind. The third of three tyres to gain a ‘good’ rating, the ADAC testers found the Winter Sport 5 a “very balanced winter tyre” that’s “particularly good on snow.” The Dunlop rubber was also commended for good performance on wet and dry roads.

Michelin second-brand Kleber repeated its Auto Bild feat of ranking higher than its flagship-brand counterpart. The Krisalp HP 3 achieved a best-in-test result in the snow disciplines and was also considered good on dry road surfaces. The other side of the balance sheet showed it to be “somewhat weaker in the wet compared with the best.” The Kleber tyre gained a ‘satisfactory’ rating.

Closely tailing its almost 32 per cent cheaper (according to the prices ADAC paid for the tyres it tested) Kleber sibling, the Alpin 5 from Michelin was praised for its best-in-test result in the dry and for wear. It also performed well in the wet. Weaknesses were observed in snow performance, however, and fuel consumption was high. Another ‘satisfactory’ tyre.

The ADAC testers found the Wingard SnowG WH2 good in the dry and in regards to wear, however its wet and snow performance was somewhat weaker and fuel consumption high. The Nexen tyre gained a ‘satisfactory’ rating.

The Fulda tyre wasn’t bad on dry road surfaces and also gave a good performance on ice and for fuel efficiency and wear, yet its wet and snow performance wasn’t up there with the best. The Kristall Control HP 2 gained a ‘satisfactory’ rating.

Finishing in 8th place, the Vredestein Snowtrac 5 was deemed “particularly good on snow.” It also delivered good results on dry surfaces and was fuel efficient. The Vredestein tyre had to nevertheless settle for a ‘satisfactory’ rating as it showed weaknesses in the wet and scored badly for noise/comfort.

The Blizzak LM 001 Evo gave a best-in-test performance for wear and also performed well on wet and dry road surfaces. The ADAC testers also commended its fuel efficiency. On the downside, the Bridgestone tyre wasn’t as strong in the snow, and its noise/comfort performance was nothing to write home about. Rated ‘satisfactory’.

We expected a good snow performance from Nokian, and the Finnish tyre brand didn’t disappoint. The WR D4 delivered a best-in-test performance in this discipline and also for fuel consumption. Weaknesses were seen in the wet and rate of wear was also high, and when the scores were tallied the Nokian tyre found itself squarely in the ‘satisfactory’ category.

The BluEarth Winter wasn’t bad in the wet or on ice, and it did well in the fuel consumption and wear tests. It was let down by its dry weather and snow performance, and also scored badly for noise/comfort. Rated ‘satisfactory’.

The WinterCraft WP51 performed nicely in the wear test and in the snow disciplines, and behaved well on icy surfaces. Yet the Kumho tyre showed some weaknesses on wet and dry roads and didn’t score highly for fuel consumption and noise/comfort. The ADAC testers gave it a ‘satisfactory’ rating.

The Giti car tyre brand is new to the UK and the Winter W1, introduced in Germany in time for winter 2017/18, hasn’t been launched here yet. ADAC tells us that it’s good in snowy conditions – it delivered a best-in-test performance for the snow disciplines – and was also good on ice. This wasn’t matched by its wet and dry performance, however. Furthermore, while relatively fuel efficient and delivering a respectable result for wear, the Giti tyre didn’t score well on the noise/comfort test. The Winter W1 was rated ‘satisfactory’.

The Pirelli Cinturato Winter was the fifth most expensive tyre in the test, and to be honest we expected more from this premium brand. The Cinturato Winter delivered a strong performance in the important wet weather disciplines as well as on snow and ice, however it was let down by a mediocre dry weather result. And as in the case of the Giti Winter W1, the Cinturato showed relatively good fuel efficiency and wear but less impressive noise/comfort performance. Rated ‘satisfactory’.

The Semperit winter tyre offered a solid performance in the wet and on ice, and also did well in the fuel efficiency and wear tests. The Speed-Grip 3 was found wanting in the dry criteria, however, and its score in the snow disciplines was acceptable but nothing to brag about. ADAC rated the Semperit tyre as ‘adequate’.

The Hankook brand was omitted from this test (ADAC shares that the compound used in the I*Cept RS² was recently updated and the tyre wasn’t available for retail purchase prior to testing), however the fifth place achieved by the I*Cept RS² in the recent Auto Bild test of 51 winter tyres demonstrates that Hankook Tire can produce a very good tyre. This makes the performance delivered by its Laufenn second-brand tyre all the more puzzling and more than a little troublesome. The ADAC testers gave the Laufenn IFIT LW31 the lowest score possible for its performance in the wet disciplines and spoke of “marked weaknesses” in conditions where H2O was present. Several positive qualities also gained a mention – the IFIT LW31 was good in the dry and on snow, and performed well for fuel efficiency. It also delivered a best-in-test performance for wear. Yet the Laufenn tyre’s drubbing in the safety-critical wet test category cast a shadow over these other characteristics, and when all was said and done the ADAC served it an ‘inadequate’ rating.