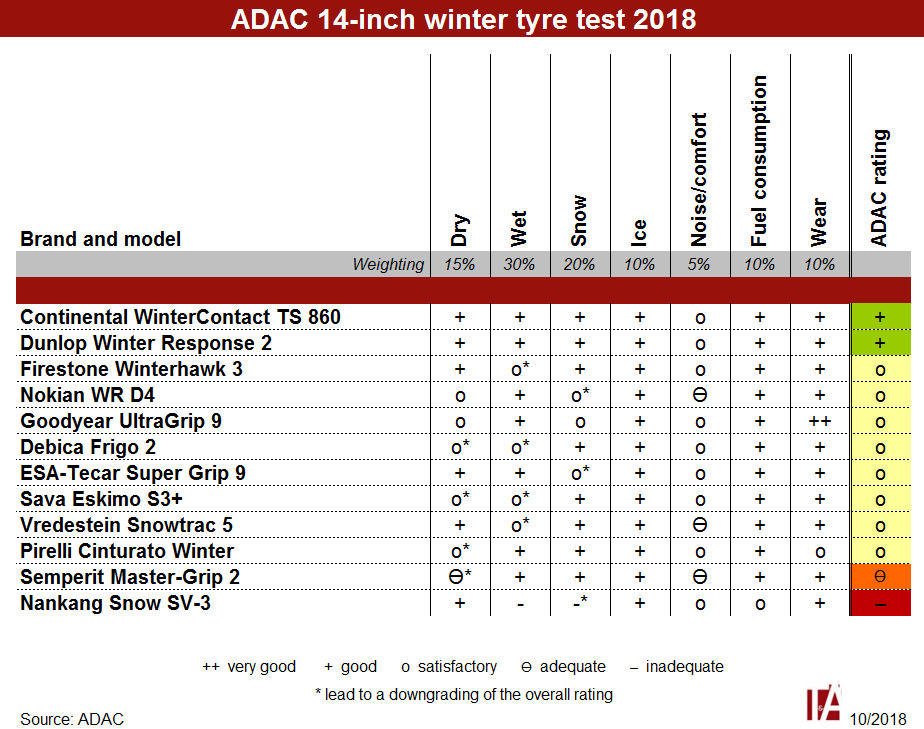 No prizes for guessing the winner of the ADAC 14-inch winter tyre test. It’s the same tyre that won this year’s ADAC 16-inch test. And the Auto Express winter test. And this year’s winter tyre comparos from GTÜ and auto motor und sport. Not to mention close runner-up in the Auto Bild winter test. We are of course talking about the WinterContact TS 860. This time round, the Continental overachiever shared its victory with the Dunlop Winter Response 2. Special mention should also be made of ADAC’s runner-up tyre, the Firestone Winterhawk 3 – a product offering the attractive combination of good performance and low purchase price.

Employing a Ford Fiesta as test vehicle, ADAC evaluated a dozen tyres in the small car size 175/65 R14 T. Most candidates had a standard load index of 82, with one 86 load index present. The tyres were tested on wet (30% of the total score), snowy (20%), dry (15%) and icy (10%) surfaces as well as for rolling resistance/fuel consumption (10%), wear (10%) and noise (5%). Testing took place at proving grounds owned by Bridgestone and Continental as well as at the Testworld facility in Finland. In addition to the two frontrunners, which achieved the same score and received a rating of ‘good’ for their efforts, ADAC handed out eight ‘satisfactory’, one ‘adequate’ and one ‘inadequate’ rating.

First things first – the two winners. The Continental WinterContact TS 860 was judged a “very balanced winter tyre” and achieved best in test results for the wet and snow disciplines while performing well on dry road surfaces. It was a similar story for the Dunlop Winter Response 2, a “very balanced” tyre that was “particularly good in the wet and on snow.” This fuel-efficient tyre also impressed on dry road surfaces.

“Both tyres differ only marginally in the main criteria and thus hit the same respectable overall grade of 2.1,” writes the ADAC. “It is only in fuel consumption that the Dunlop fares a little better than its direct competitor.”

Finishing third, the Firestone Winterhawk 3 was commended for achieving a best in test result on dry road surfaces, even if it was weaker in the wet than the winning duo. The Firestone tyre received a ‘satisfactory’ rating, as did the following seven candidates, including the fourth-placed Nokian WR D4.

Although considered “really good on wet road surfaces and ice,” the WR D4 was “relatively weak on snow.” Snow also proved an area of weakness for the Goodyear UltraGrip 9 despite its good performance in the wet. The Goodyear tyre also proved a fuel miser and achieved a best in test result for wear/mileage. Another Goodyear brand participating in the ADAC 14-inch test was the Debica Frigo 2. Unlike the UltraGrip 9, the ADAC testers found the Frigo 2 good on snow, yet it was “relatively weak on dry and wet road surfaces.”

Next came the Esa+Tecar Super Grip 9. This product, little-known in the UK, achieved a best in test result for fuel consumption and performed very well in the wet. Weaknesses were seen in the snow disciplines. Sava, the third Goodyear brand competing in the test, was represented by the Eskimo S3+. Like its Debica sibling, this was also good on snow and relatively weak on wet and dry surfaces. The Vredestein Snowtrac 5 gave a good account of itself both in the dry and on snow, and received good marks for fuel efficiency. Its performance in the wet couldn’t compete with the best in test, however, and tyre/road noise was relatively high. Having achieved the same overall score, the Esa+Tecar, Sava and Vredestein tyres jointly finished the test in seventh place.

The last of the eight tyres to be given a ‘satisfactory’ rating was the Pirelli Cinturato Winter, at 74 euros the most expensive tyre evaluated. The Pirelli product was considered a fuel-efficient tyre that behaves well in the snow, and it also delivered a respectable wet and ice result, but the ADAC testers found the Cinturato Winter “relatively weak on dry road surfaces” and also marked the tyre down for wear/mileage and tyre/road noise.

The Semperit Master-Grip 2 was rated ‘adequate’. ADAC found the tyre good on snow and acceptable in the wet and on ice, however it was “weak on dry road surfaces.” The Master-Grip 2 also lost points for tyre/road noise.

The Nankang Snow SV-3 was the cheapest tyre in the test, at 52 euros costing a whole euro less than the third-placed Firestone Winterhawk 3. By saving a euro, motorists find themselves with a tyre rated ‘inadequate’ by ADAC. This unenviable rating reflects questionable wet and snow performance – ADAC says this is “very weak” – as well as poor fuel efficiency. The Nankang tyre was judged acceptable on dry road surfaces and on ice, and performed well in the wear/mileage test.

ADAC says it was unable to include tyres from Michelin and Hankook in the current test. The motoring organisation shares that at the time of testing it “wasn’t absolutely clear” whether the Michelin Alpin 4 would continue to be available or would be replaced by a successor, and the Hankook i*cept RS2, the tyre wasn’t available for sale through independent retailers following an update of the tyre’s compound.

The Continental WinterContact TS 860 or the Dunlop Winter Response 2 for those seeking a good balance of performance.

Anyone looking for very good driving characteristics on dry road surfaces, yet is prepared to accept minor weaknesses on wet roads, should consider the Firestone Winterhawk 3.

If wear and high mileage is a priority, and minor weaknesses in the snow are acceptable, the Goodyear UltraGrip 9 is worth considering.