You are here: Home1 / News2 / Motorsport3 / Why is Pirelli supplying different tyres for Silverstone F1 double-hea...

Why is Pirelli supplying different tyres for Silverstone F1 double-header? 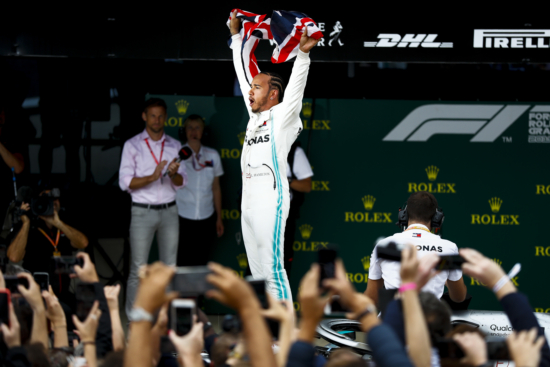 Pirelli will supply Formula 1 with two different tyre specifications in the Formula 1 Silverstone double-header. The British Grand Prix this weekend, which is the second event of the year to be sponsored by Pirelli, will have the C1 compound as P Zero White hard, C2 as P Zero Yellow medium, and C3 as P Zero Red soft. The 70th Anniversary Grand Prix one week later will be one-step softer: so C2 as the hard, C3 as the medium and C4 as the soft. This creates Formula 1 history: the first time ever that there has been two different tyre nominations for a double-header at the same venue.

So why make this change? The exclusive tyre supplier says the change will keep the teams on their toes, and potentially increase spectator interest. Pirelli said the choice has been made to add an element of unpredictability from one race to the next, with teams having to re-think their strategies for the second Silverstone weekend.

During the first half-hour of FP2 at the 70th Anniversary Grand Prix, all the teams will test unmarked 13-inch prototype slick tyres for next year, according to a run plan that will be defined by Pirelli. This will validate the development of tyres for 2021: the final season of 13-inch tyres in F1.

Silverstone is the first race of the year where there will be a really severe test of the tyres, Pirelli adds. This is also why it’s the first race of 2020 where the hardest C1 compound is seen. The high energy demands of long and fast corners such as the Maggots and Becketts complex load up the tyres with sustained g-forces. Silverstone has been resurfaced twice in the last two years. Compared to last year, the surface should now be a little more mature and less oily as the bitumen settles. Track roughness is about average compared to the other circuits seen on the calendar.

Mario Isola, head of F1 and car racing, said: “With two races at the same venue, on a track that the teams know well, it was important to try and inject an additional element for the second race, which is why we are going one step softer for the 70th Anniversary Grand Prix. The first nomination is what we had last year, which broadly speaking should create between one and two pit stops. For the second race, depending on each driver’s strategy, we could see mainly two stops. Gaining data on the C4, which will face an extremely big challenge at Silverstone, will be the key to the second race, while the teams will obviously already have plenty of information about the C2 and C3.

“Silverstone is characterised by big lateral loads that put plenty of energy through the tyres, so avoiding overheating and managing degradation will be especially important. Finally, our 2021 tyres will be validated in a half-hour test at Silverstone with all the teams, so there’s plenty to focus on throughout these two weekends.”

Pirelli will add one more race to its support package at Mugello in Italy, following its sponsorship of the British and Austrian grands prix. The 70th Anniversary Grand Prix marks 70 years since the inauguration of the first F1 World Championship at Silverstone in May 1950. The race – and first F1 title – was won by Alfa Romeo’s Giuseppe Farina on Pirelli tyres.

As well as Formula 1, Formula 2 is racing in Britain on Pirelli’s new 18-inch tyres: which have helped to deliver six stunning races so far. Formula 3 additionally resumes at Silverstone, providing plenty of action. Both championships also have different tyre nominations for each weekend of racing.

Pirelli’s motorsport campaign across the board is resuming as Covid-related restrictions ease in Europe: Pirelli driver Alexey Lukyanuk won the Rally di Roma last weekend (part of the European Rally Championship) while the Belgian Audi Club Team WRT won the first round of the GT World Challenge at Imola. Pirelli has also been testing its 2021 WRC tyres in Sardinia.