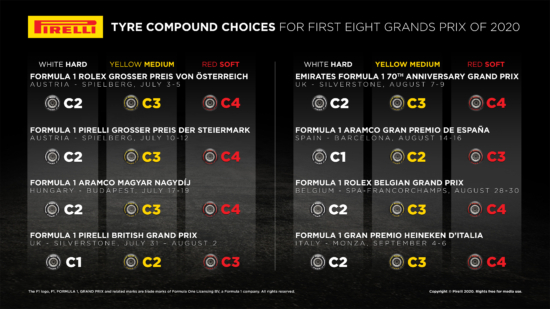 Formula 1 tyre supplier Pirelli has confirmed the compound choices for the first eight 2020 grands prix. Pirelli has made two interesting decisions in this list. First, the softest C5 compound will not feature, a fact most probably informed by the lack of a street circuit in the current calendar. Secondly, the Silverstone double-header on 2 and 9 August will get two different sets of compounds, with C1-3 at the first grand prix, and C2-4 at the second. This will provide an interesting comparison for fans, and gives the tyre manufacturer another chance to discuss the effects different tyre compounds can have on F1 racing.

Mario Isola – head of F1 and car racing, said: “With so many variables at the start of this delayed season, and a flexible calendar that doesn’t leave much time to react to changing circumstances, it was agreed with the Teams, the promoter and the FIA to announce the compound nominations for the first eight races this year all together. As usual, these compounds have been chosen to best match the characteristics of the individual circuit and provide interesting opportunities for race strategy.”

The tyre choices demonstrate Pirelli’s latest F1 branding strategy. While it continues to supply five slick tyre compound choices named C1 to C5, Pirelli opted to drop two of its five sidewall colours, purple and orange, from the 2019 season. The red, yellow, and white sidewalls retained by F1 now signify the three compounds selected for each race weekend, from softest to hardest. 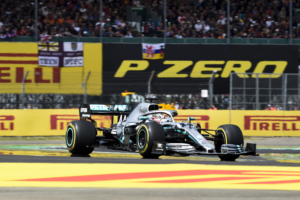 Pirelli and F1 racing will return to Silverstone, without those in the grandstands, twice in 2020

Formula 1 confirmed that it will visit Silverstone for back to back grands prix – held behind closed doors – last week. The European leg of the compressed season will start on 3-5 July with consecutive weekends at Spielberg, Austria, then visit Hungary, before the 2 and 7 August Silverstone races. F1 will then visit Barcelona, Spain (14-16 August), Spa-Francorchamps, Belgium (28-30 August), and Monza, Italy (4-6 September).

Silverstone and Formula 1 had to clear several hurdles before the events – the British Grand Prix and the Emirates 70th Anniversary Grand Prix – could be confirmed. An initial plan saw the circuit agree to host two consecutive behind-closed-doors race weekends, with the races on 19 and 26 July. However, the British government’s belated decision to implement 14-day quarantine restrictions for international travelers had cast a shadow of doubt on the plan. Doubts were increased by confirmation that the government did not intend to offer a blanket exemption to professional sport. But the prime minister Boris Johnson is reported to have intervened, telling cabinet ministers to make plans for the events to take place.

Announcing the initial eight grand prix calendar, Chase Carey, chairman and CEO of Formula 1, said: “In the past weeks we have been working tirelessly with all our partners, the FIA and the teams to create a revised opening 2020 calendar allowing us to restart racing in the safest possible way. We are pleased to be able to set out our opening eight race calendar today and look forward to publishing our full calendar in the coming weeks. I want to thank every promoter and partner for their support and ongoing commitment to Formula 1.

“While we currently expect the season to commence without fans at our races we hope that over the coming months the situation will allow us to welcome them back once it is safe to do, but we know the return of Formula 1 will be a welcome boost to sports fans around the world.”

Silverstone responded that it was “delighted” to confirm the two grands prix, adding that “although these will be closed events we are confident that our legendary circuit will provide the perfect setting for a great show for everyone watching at home.”

Silverstone managing director Stuart Pringle had previously appeared on UK broadcaster Sky Sports’ The F1 Show in May to confirm the status of the proposed races. He said that he has been “encouraged there’s progress in the right direction”, with government showing a “clear desire” for the return of elite sporting events. The government released some guidance for the return of athletes to close-contact training, though it also stressed the need for sporting bodies to consult with teams on the precise terms of this return.

Pringle stressed that Formula 1, in common with other motorsport, represents an increased logistical challenge over other areas of high-interest sport, such as Premier League Football. Its “huge [international] logistical operation… requires some clarity” in order for plans to proceed. He also said that F1 and Silverstone had the ability to employ a degree of flexibility around the dates.

While revelling in the news that F1 would visit the circuit, Silverstone also had to announce the cancellation of the summer’s MotoGP. Pringle told Motorsport Magazine that there “was no way through the logistical and operational issues resulting from the pandemic and rearranged calendar.”

The explanation for the contrast with the circuit’s ability to increase its F1 schedule this year also shines some light on why the British government was prepared to bend its quarantive rules to confirm the two grands prix. Seven of F1’s 10 teams are UK-based, with estimates putting the series’ value to the UK economy at around £7 billion. The benefit of MotoGP to the UK economy is, by contrast, much smaller. With less of an incentive for the UK government to accommodate MotoGP’s similarly complex logistical arrangements, there would be no guarantee that participants could avoid the country’s mandatory 14-day quarantine period. Therefore series organiser Dorna opted to cancel the British leg of the championship.