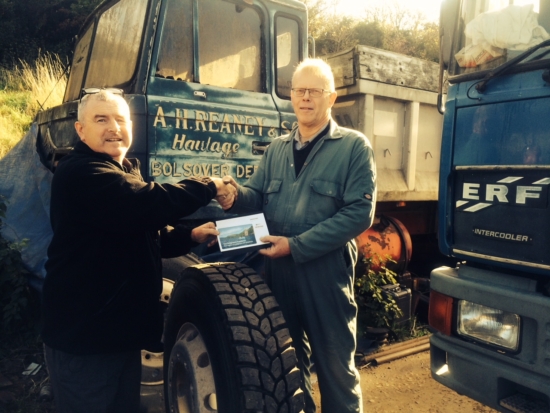 It has been a case of business – but not as usual – for Top Treads, one of Bridgestone’s largest European Bandag franchisees as the company has faced “the most challenging working conditions ever encountered in the company’s history”.

Top Treads, which produces up to 30,000 pre-cure retread tyres per-year from factories in Yorkshire and The Wirral, has had to be very resilient to adapt during and emerge successfully from lockdown. Indeed, Top Treads was one of just a handful of European manufacturers to remain open for the entire period.

Managing director Steve Evans said that some of his customers needed very little whereas others demanded significant numbers of tyres as they were servicing national food supply chains who needed to keep Britain fed:

“When the coronavirus hit, we were never going to shut up shop and go home. We wanted to let our customers know that we would always be there to meet their needs – and that is what we have done.

“The MOT delay also meant that there were a lot of vehicles on the roads with suspect tyres, so we were on hand to support our customers with tyre maintenance issues. Overall, it was not something that you could ever plan for, so we’ve just tried to react, keep calm heads and display a general sense of positivity for our customers and our employees.”

Top Treads took the decision to split working hours into two shifts, while some members of staff were furloughed. Meanwhile, the government’s bounceback loan was a welcome relief and Evans praised the scheme for the ease in which funds were made available:

“Let’s be clear, things aren’t like they were and we are not doing the volume we did in February, but we are moving in the right direction now. We’ve let our customers know that we are there for them via a number of calls and messages and we are sure that our proactivity will stand us in good stead in the future.”

The year will go down as the most challenging in Top Treads’ history, not least after an influx of cheap Chinese commercial new tyres flooded into the market to pose their own problems before COVID-19 hit. But the world has kept turning and a new generation of fleet managers began to place retreaded products at the heart of their tyre maintenance programmes, with their environmental benefits proving to be a compelling factor. Steve Evans added that fleet managers are adopting a ‘total cost of ownership’ mindset when it comes to tyres and are also considering the environmental impact of their operations more than ever before, making retread the compelling choice once again:

“Fleet managers are much more enlightened than they used to be, certainly than they were 10 years ago. Between 2013 and 2016, Chinese imports were coming into the market at a price that we just couldn’t compete with. A younger generation (of fleet managers) are making decisions and they generally adopt a total cost of ownership model, which is where our range of retread products prove compelling.

“As a result, cheap Chinese imports are not the solution they once were. Moreover, their casings cannot be used for a second or third stage of life like premium casings can, so fleets have the added environmental burden of having to dispose of them. They are now seen as a nuisance. To be blunt, fleets who opted for cheap, now have a yard full of casings that did not perform, and that nobody wants.”