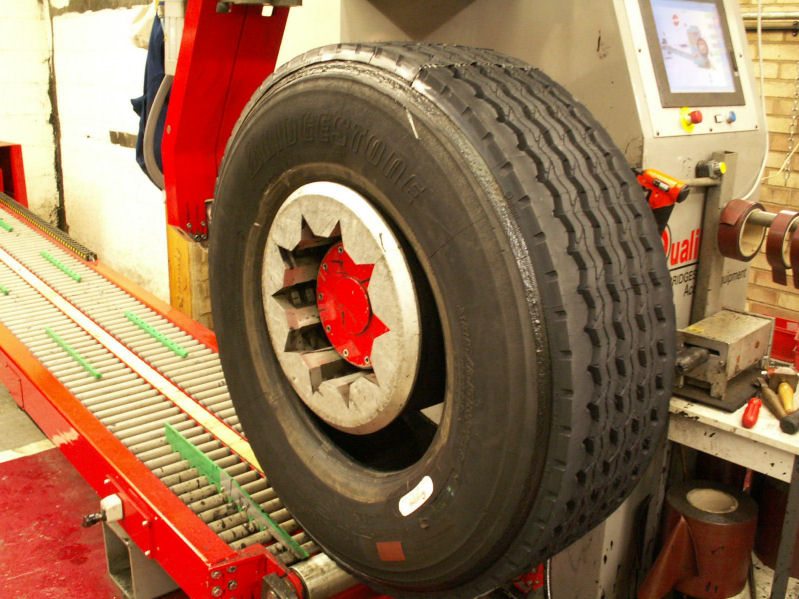 Bridgestone has been looking to increase its truck and bus tyre market position via strategic retreading acquisitions in this part of the European market for around a decade now. One such acquisition was the targeted purchase of Lincolnshire-based Bulldog remoulds back in 2005. A little more than a year later this key part of the UK market which specialised in mould-cure retreads was joined by the entire global Bandag operation, which of course specialises in pre-cure franchising around the world. The two operations couldn’t be more different aspects of retreading, however while the acquisitions came in quick succession and the benefits of both are obvious, Bridgestone has now spent years working through the integration of both into its wider business model.

Now, following years of investment and efficiency and process upgrades at Bulldog as well as hard work integrating Bandag into its offer, the company is being more open than ever about what this combination brings to the market in general and fleets in particular. Tyres & Accessories recently contacted Bridgestone representatives in order to find out more.
One such example of the increasing emphasis Bridgestone is putting on its retreading operations is the way this part of the business has been pitched at the CV Show which takes place at the NEC in Birmingham each year. According to the company, Bridgestone’s underlying message at this year’s CV Show is a remarkably simple one: “For prolonged tyre life and considerable savings, look no further than Bridgestone and our Bandag franchise network,” said Bridgestone retread development manager Terry Salter.

Behind all this is a programme of investments in the pre-cure network. According to the company, Bandag’s Alliance Excellence investment programme is responsible for what the company is calling a “huge investment in 2014”. Not concrete figures of what this “huge” investment works out as have been released, but in practical terms this means Bandag franchise partners are benefiting from state-of-the-art shearography machinery, bespoke training programmes and an overall increase in retreading capacity across the UK and Ireland.
Bridgestone’s retread and Bandag franchise manager Ross Medlyn filled in some more background about what is behind the investment: “The Alliance Excellence Programme not only drives excellence but it also rewards excellence as well. The ‘reward element’ is driving investment in equipment and other resources, including training. As the market evolves, we need to stay ahead of a changing environment. We need to stay competitive and maintain our differentiation for end users. This requires the continuous improvement of all of our Alliance partners.”

But, according to Terry Salter, irrespective of what the company invests in its Bandag partners the goal remains clearly delineated: “the overall aim is to provide the best possible value for money for fleet operators. Our retreading offering is an integral part of this aim.”
Bridgestone’s retreading provision falls under the company’s Total Tyre Life service, which aims to maximize tyre life, thereby reducing tyre cost per kilometre over the entire lifecycle, through the supply of Bridgestone premium new tyres and Bandag retreads. Both Salter and Medlyn believe that the brand is stealing a march on its competitors in this area in fleet savings, thanks to the following “assets”:

Total Tyre Life: Bridgestone’s truck tyres have retreading technology built-into the original tyre design. To realise this potential, Bridgestone’s approach to market includes not only the sale of new and retreaded tyres but also a unique and comprehensive casing collection service.
This service aims to collect the removed tyres within an average of three days of notification and then track those casings throughout the retreading process, ensuring that maximum value is realised from this key asset.

Bandag franchise: In addition to Bridgestone’s own manufacturing facility in Bourne, the network of successful Bandag franchisees it inherited when the global purchase of the Bandag retreading business took place in 2007 is said to have made a significant impact. It has not only increased the production capacity and sales of the company’s retreads, but it has also increased the quantity of casing sources.

A European network: As we reported in last year’s Retreading Special, Bridgestone UK has already spread its casing management expertise abroad. This includes exporting this know-how to the Danish market with the installation of its unique casing management system at the Tobol plant. This has reportedly improved casing operations within the Danish market and has resulted in an exchange of casings between these two nations, something that further assists Bridgestone’s customers. According to Bridgestone, this expertise is now being spread across many other European countries as well and will – as this year progresses – result in further improvements in casing management.

But with all the talk about investment in pre-cure retreading this year it begs the question: does the way Bridgestone as a company market pre-cure retreads (specifically Bandag) have any effect on mould-cure production at Bulldog and in fact on retread production in general? It would seem that company is trying to position both part of the business as important, two strings in the Bridgestone retreading bow, if you will.