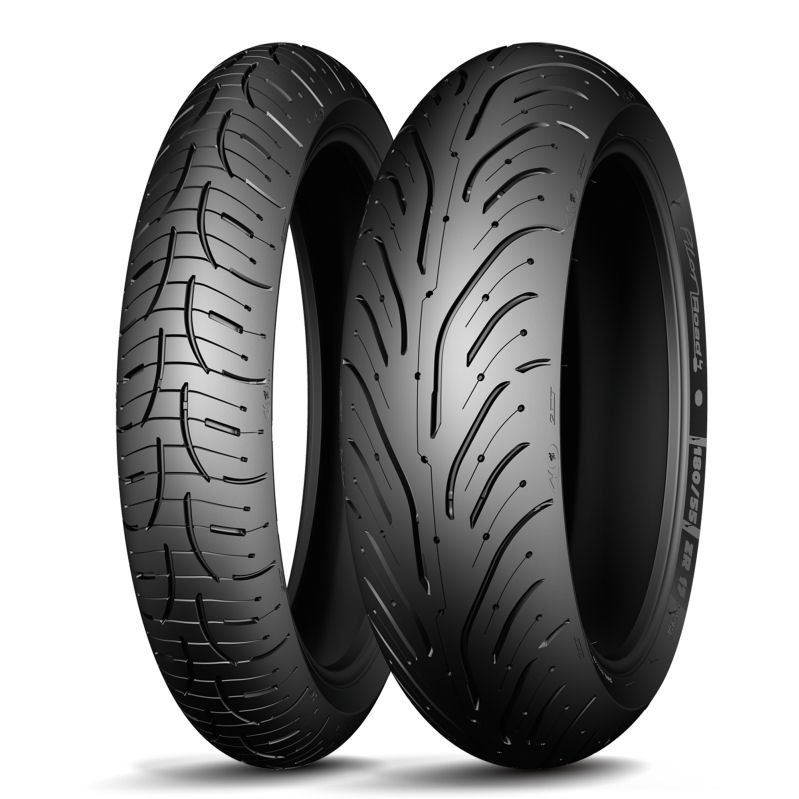 Those attending the MCN Motorcycle Show in London back in February were amongst the first to see Michelin’s latest-generation sport touring tyre up close. Since that time, the Pilot Road 4 has been officially launched, and its manufacturer says the range’s introduction confirms Michelin’s number one status in the European and North America sport touring radial markets. Michelin also says the new line-up sees the brand “continue to push out the envelope” in terms of overall performance. Amongst the improvements Michelin promises riders are better wet braking and greater longevity.

It is only three years since predecessor tyre the Pilot Sport 3 was introduced, but by the time of its replacement this particular product had become a senior member of Michelin’s two-wheel portfolio; the tyre maker introduced no less than seven new ranges during the course of the last year, and the launch of the Pilot Sport 3 now rounds off the complete renewal of Michelin’s motorcycle radial offer in the space of two years. Since 2012, Michelin has launched the Power Slick, Power Cup, Commander II, Power Super Sport, Pilot Power 3, Pilot Power Street Radial, Anakee III and now the Pilot Sport 4.

This latest tyre range caters to the majority of road bikes with an engine capacity over 600cc and is available in three versions – Standard, GT and Trail. The first of these, as the name implies, is aimed at regular sport touring bikes, while the trail is oriented towards larger enduros. The GT is for more serious touring bikes with heavier than usual payloads; this version has been chosen as original equipment in size 120/70 ZR17 (front) and 180/55 ZR17 (rear) for the BMW R 1200RT – the best-selling bike in its class in the UK – and will be fitted to around 40 per cent of all R 1200RT models that leave the factory.

As mentioned above, wet braking and longevity are two headline qualities on the Pilot Road 4. According to the results of Michelin-commissioned tests held at the Dekra Test Center in June 2013 between the Pilot Road 4 and the Dunlop SportmaxRoadsmart II, Metzeler Roadtec Z8 Interact M/O, Pirelli Angel GT Gran Tourismo and the Bridgestone BattlaxSport Touring T30F (front tyre size 120/70 R 17 M/C 58W and rear tyre size 180/55 ZR17 M/C 73W), the Michelin tyre outperformed nearest rival the Bridgestone T30F by 17 per cent when it came to braking on slippery roads. And internal tests carried out last year also showed the new tyre to offer a 20 per cent improvement in longevity over its predecessor.

To achieve this level of performance, the Pilot Road 4 utilises four key technologies: Michelin 2 CT (Two Compound Technology), XST (X-Sipe Technology) and an enhanced version of this, XST+, along with 2 AT (Dual Angle Technology) in the GT version.

Both front and rear tyres feature 2 CT technology, with (depending on version) medium compound paired with either soft or hard compounds in differing proportions. This technology employs a softer compound for the shoulders and a more resistant compound for the centre of the tread in order to prolong tyre life and optimise grip. Combined with XST+, 2 CT ensures even wear, even under intensive use.

With XST, the part of the tread band in contact with the road features sipes and water reservoirs which slice through surface water and increase the tyre’s water clearance capacity to obtain a level of grip on a par with that associated with near-dry roads. XST+ technology features transverse sipes that improve braking performance, while the edges of the sipes are chamfered to help to prevent abnormal wear in extreme conditions. The front tyre’s transverse sipes break up the film of surface water to provide exceptional braking performance in wet weather. The rear tyre’s longitudinal sipes optimise traction and acceleration performance. This new tread pattern was developed to optimise the grip delivered by front and rear tyres alike on both dry and wet roads, as well as to ensure even wear.

Michelin calls the new architecture of its patented 2AT “truly revolutionary” and says it is the result of a five-year research and development programme. “It heightens riding enjoyment on heavier bikes by providing the Michelin Pilot Road 4 GT with the necessary rigidity to optimise stability when cornering and along on straights,” shares the tyre maker. To enhance stability, 2AT provides a 15 per cent gain in terms of rigidity compared with a conventional tyre. To achieve this, it employs a unique combination of cross-ply and radial constructions, laid at different angles. Michelin says the tyre thus benefits from the advantages of the former’s higher load carrying capacity and the latter’s enhanced riding pleasure.

Following a development period that saw prototype and test tyres covering a total of 2 million kilometres, the Pilot Road 4 is now available. But this does not mean the end of the line for its predecessor. Speaking with Tyres & Accessories earlier this year, Ed Wilson, the commercial director of Michelin’s Two Wheel business in the UK, Ireland, the Nordic region and Russia, said the new range will be produced and sold alongside the previous generation tyre. “Michelin will simultaneously offer the Pilot Road 2, Pilot Road 3 and Pilot Road 4 – we aim to provide riders with a ‘triple offer’ that covers entry level, medium and top level in terms of price and performance.”