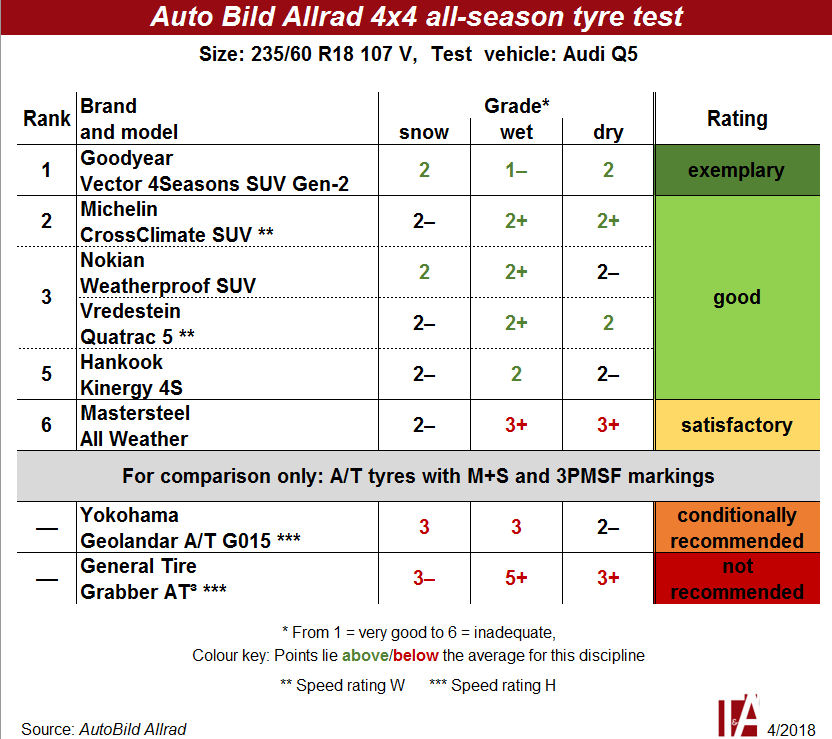 It was a victory for Goodyear in the all-season SUV tyre test published by Auto Bild Allrad this month. The publication voted the Vector 4Seasons SUV Gen-2 the winner of its six-tyre comparative evaluation, honouring the Goodyear rubber with the only ‘exemplary’ rating of the test.

The only criticism the Auto Bild testers levelled against the Vector 4Seasons SUV Gen-2 was its high price. When subtracting pain induced by the hip pocket nerve, they recommended Goodyear tyre for its well-balanced driving characteristics on wet and snow-covered surfaces and its good aquaplaning safety, as well as low tyre/road noise.

While only one tyre gained an ‘exemplary’ rating, four were considered ‘good’.

Runner-up tyre the CrossClimate SUV lost points for a “prolonged braking distance on snow.” Otherwise there was little to complain about – Auto Bild Allrad commented that the Michelin tyre was “almost as good as a summer tyre on dry roads” and also delivered good wet weather performance and low rolling resistance.

The fourth tyre to finish with a ‘good’ rating was the fifth-placed Hankook Kinergy 4S. Auto Bild Allrad wrote that the Hankook tyre has a “particularly comfortable ride, good aquaplaning safety, affordable price.” On the other side of the coin, they found the Kinergy 4S was not a particularly quiet tyre, nor was its braking distance on snow or in the dry especially impressive.

It is only a few short years since ‘Made in China’ served as bywords for poor tyre performance, yet readers who assumed the Mastersteel tyre would confirm this stereotype were in for a disappointment. Although the Mastersteel All Weather finished sixth out of six, it gained a rating of ‘satisfactory’ and displayed no major deficits. Its performance on snow was almost on par with some of the big-name brands, and in the wet and dry the All Weather was “was clearly, but not dramatically, behind the brand-name tyres.” The testers commented that “the Chinese are evidently learning.” Overall, they considered the all-season SUV tyres’ performance at an “astonishing level.”

As for the pair of M+S and 3PMSF-marked A/T tyres tested alongside the six, the Auto Bild Allrad rated the Yokohama tyre as ‘conditionally recommended’ and gave the General Tire product a ‘not recommended’ rating as both had “heavy disadvantages on the road,” primarily in the wet.