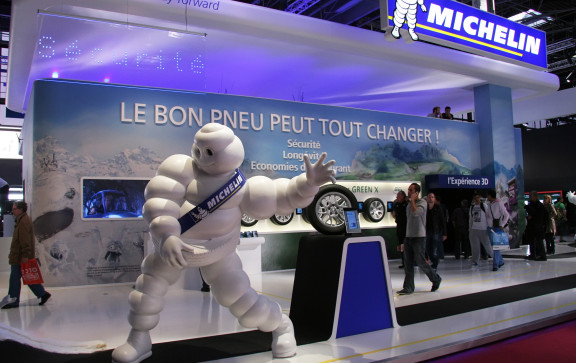 The Michelin brand’s value has grown some 30 per cent to US$7.9 billion in the latest Brand Finance Tyres 10 ranking. As a result Bibendum is now the world’s most valuable tyre brand.

According to Brand Finance’s data, the Michelin brand is now worth $7.9 billion. The sharp increase (+30%) means it overtook previous leader Bridgestone, which saw its brand value fall 6 per cent to $7 billion, resulting in a one-place drop from first to second position in the annual Brand Finance Tyres top 10 ranking.

As well as being the most valuable brand, Michelin is also the strongest. Its Brand Strength Index (BSI) score was up a sector-leading 6 per cent to 86.9 out of 100. The corresponding brand rating improved a notch to AAA, making Michelin the only tyre brand with a clear triple-A rating.

Sustainability and technology initiatives have strengthened the Michelin brand, including a concept for a 3D-printed tyre that can be adapted to road conditions and never needs replacing which was unveiled last summer to widespread acclaim. Michelin tyres also performed well in motorsport, winning at the Le Mans 24hr race and being used in Formula E, which is itself becoming a desirable place to showcase technology for leading car manufacturers.

Alex Haigh, director of Brand Finance, commented: “A strong brand is about more than marketing. Michelin has started direct sales of tyres to customers through retail outlets and the internet, a move that helps build a direct relationship with consumers, and allows the company to collect valuable data. It is also widening its sub-brand portfolio, allowing it to sell price-competitive tyres and premium ones without cannibalising market share.”

While it was good news for Michelin at the top of the table In the meantime, there was consistently downward trend for the three Japanese brands in the top 10. Despite significant investments, the world’s largest by sales value Bridgestone (which is also sponsoring the 2020 Olympics amongst other things) as well as Chelsea Football Club shirt sponsor Yokohama and Sumitomo all fell in brand value.

Sumitomo Rubber Industries was worst hit, down 62 per cent to $0.6 billion. But Yokohama was also down 18 per cent $0.8 billion and. Brand Finance puts this down to a weak domestic market affecting all three producers, while value gains from stronger sales growth in North America, Europe, and Asia were partially offset by a weaker yen.

At the same time, the latest ranking sees Chinese tyre brands gain traction as they begin to challenge for top 10 rankings, with Maxxis up 10 per cent and two places to eighth position. As a result Brand Finance described Chinese “successful challengers to the established players in the tyre industry” for the first time.

Having said that, apart from Maxxis in 8th position, Chinese tyre brands are still outside the top 10. Nevertheless, Linglong Tire and Sailun Jinyu were amongst those that are said to be “making their mark”. Given their current brand value growth, these brands are expected to enter the top 10 as early as next year.