In addition to being the strongest brand globally, according to Brand Finance, Michelin has been named the world’s most valuable tyre brand for the third year in a row. However, the gap between first position and second-placed Bridgestone narrowed, meaning the Japanese tyre manufacturer is well-placed to regain pole.

The Brand Finance tables rank tyre brands according to two metrics, BSI and brand value. And while the same two brands hold first and second place across both measures (Michelin and Bridgestone respectively), apart from that they tell two very different stories.

As we have seen, according to the value metric Michelin is the strongest tyre brand in the world, with a value of $7,161 million. However, this went down 1 per cent from $7,232 million in 2019. In the interim, second-placed Bridgestone has moved at the same rate in the opposite direction, increasing its brand value from $6,955 million in 2019 to $7,024 million in 2020. Not only is the gap between Bridgestone and Michelin getting smaller, but the 2020 figures is actually some way off the value Bridgestone was able to achieve when it headed the table in 2017 ($7,400 million). The point is, with the delayed Tokyo Olympics scheduled for next year, Bridgestone is well-positioned to regain pole-position next year.

Third-placed Continental may have lost 2.6 per cent of its value, but it retained its 2019 position and clear water of over $1.2 billion separates its from fourth-placed Dunlop (up 5.7 per cent). Interestingly, the value of fifth-placed Goodyear is growing significantly faster than Dunlop (up 6.9 per cent since 2019). Not only does this reflect Goodyear’s re-centralisation of the Goodyear brand in Europe and other key markets, it also suggests that value of the Goodyear brand could soon overtake Dunlop.

The next few positions very generally maintain their places until you get to Yokohama in eighth. Despite the culmination of its Chelsea shirt sponsorship deal, Yokohama’s brand value grew to $873 million, up 6 per cent compared with 2019. Not only this, but it was the only brand already in the top 10 to ascend a position in the ranking, rising from ninth to eighth place.

However, arguably the biggest success in the table was reserved for Linglong Tire, which entered the top 10 in ninth position this year. Valued at $760 million, Linglong leapfrogged Sumitomo Rubber Industries, which saw its value decline 5.5 per cent to $756 million.

The LingLong brand also achieved an AA- brand rating as well as a 68 BSI score. This isn’t enough to enter the top five brand strength ranking, but does put the Chinese tyremaker on the map. So what has LingLong done to achieve this success? According to Brand Finance, “Linglong has managed to increase its overseas sales over the last few years driving company growth outside mainland China and Hong Kong. Overseas sales rose from 0.5 per cent in 2014 to more than 25 per cent today, with increasing familiarity gained in key European markets thanks to sponsorship activities with Juventus, a relationship that has been extended to 2022 and Vfl Wolfsburg, where the brand became sleeve sponsor.”

Indeed, Brand Finance director Alex Haigh suggests sponsorship strategies are becoming increasingly important to tyremakers: “[These] are not new to tyre brands, but we have now seen more brands expanding their sponsorship portfolios outside of motorsports and especially into football. To name a few, Pirelli, Yokohama, Hankook, LingLong, have been building their awareness and familiarity with the public through sponsorship strategies in football.”

However, while all the top 10 most valuable tyre brands are clearly significant forces to contend with in tyre space, they are miles away from the four overall leaders in the brand finance line-up. Amazon, for example, has a brand value of $220.8 billion, followed by Google ($159.7 billion), Apple ($140.5 billion) and Microsoft ($117.1 billion). 100th placed Dell’s brand value is still valued at $17.6 billion, a figure that makes the tyre brand results look smaller. 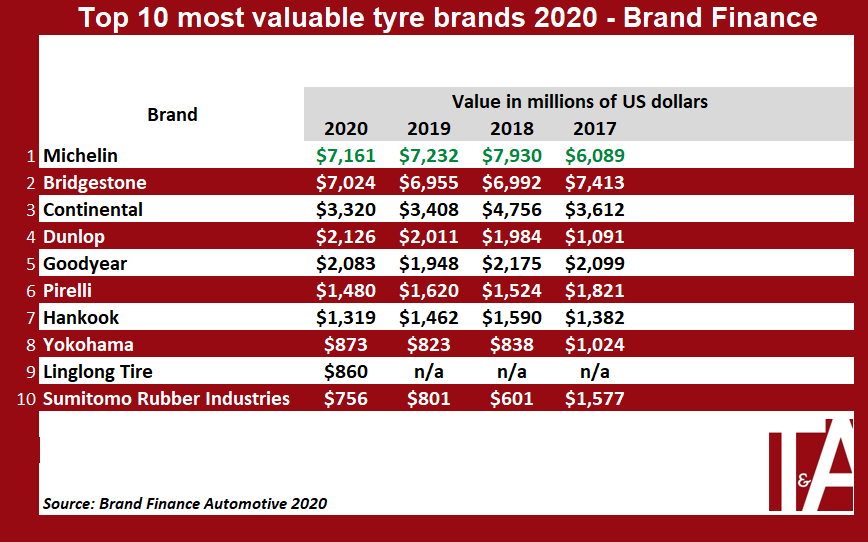