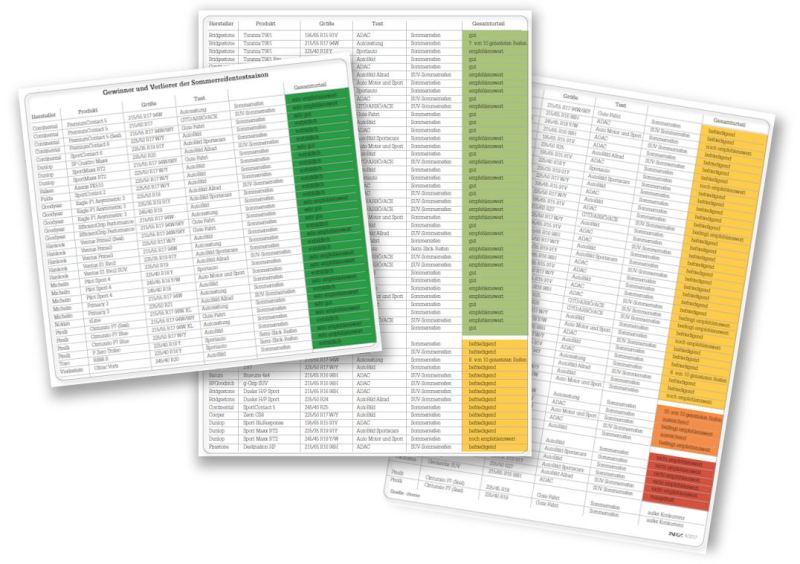 The 2017 summer tyre test season is over and the winners and losers have been determined. While the winter tyre tests last autumn were dominated by a handful of premium manufacturers, most notably Continental, during the current test season the products from many more tyre makers gave convincing results. Falken, Fulda, Toyo and Vredestein are four examples – from nothing better than a ‘satisfactory’ rating last autumn, all gained top ratings in their respective summer tyre tests.

It is also interesting to note that from the 132 currently tested tyres (the 32 eliminated in the preliminary round of the Auto Bild test don’t appear in the table as the testers didn’t give them an overall rating), only half a dozen were not recommended. The fact that two of the six non-recommendations were for the Firestone Firehawk SZ90μ, a product from the world’s largest tyre and rubber manufacturer, may raise eyebrows, however it shouldn’t be forgotten that the tyre has been on the market since 2008 and no longer can be considered state-of-the-art.

Four manufacturers claimed the lion’s share of test wins: Continental, Goodyear, Hankook and Michelin each received five top ratings. When also counting the three top tests marks from Dunlop and that gained by Fulda, Goodyear as a company can arguably be considered the easy winner of the current summer tyre test season.

The table below offers a complete overview of the winners and losers from the 2017 summer tyre test season.