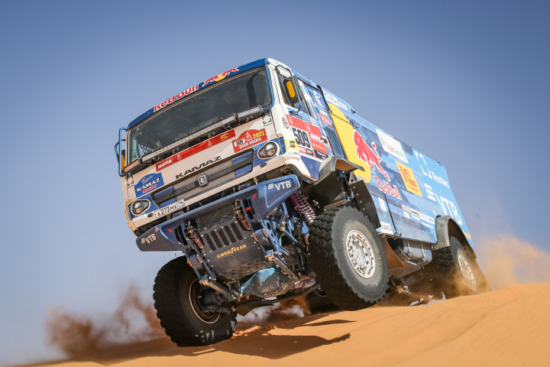 A week into this year’s Dakar event, and Goodyear reports that its partner team is dominating proceedings. The Kamaz-Master team has claimed six out of seven stage victories and two to three podium places so far.

The 43rd Dakar in Jeddah, Saudi Arabia began on 3 January, with competitors covering some 4,700 miles (7,500 kilometres) before reaching the finish line on 15 January. Every mile of the specials is new to this year’s route and the organiser has reduced the number of high-speed sectors to level the playing field by removing some of the more powerful vehicles’ potential competitive advantage.

The first half of the race turned out to be a rough start for some of the teams, and five Truck category competitors withdrew in the first six stages. Dakar 2020 defending champion, Kamaz-Master’s Andrey Karginov, also faced technical issues and dropped to 10th place, but later clawed his way back to 8th position.

From A to B with no surprises

“The setting of the Dakar 2021 is even tougher than the previous one. Never seen such close racing especially on the 4th stage. Every stage is representing new challenges including high sandy dunes, easy to get trapped and rocky canyons or dry riverbeds, drivers, trucks and tyres are tested to the maximum every day. Once more the standard Goodyear OffRoad ORD tyres showcase their extraordinary performance in terms of grip and durability. Our crews can focus entirely on the race without having to worry about the tyres, no matter how harsh the racing conditions, they keep moving forward.” says Vladimir Chagin, Kamaz-Master team manager.

“With their 1,150bhp and 9.5 tonnes the Kamaz-master trucks are one of the most incredible vehicles at the Dakar. During the hi-speed sections they can reach speeds up to 140km an hour. The sections demanding a more careful ride can challenge the crews with sharp stones hidden under the sand and an important part of the rally is on rocky surfaces. Comparable to the daily operations of our customers, Goodyear products are supporting the team in getting as quick as possible from A to B or from start to finish, without any surprise.” comments Maciej Szymanski, marketing director for Goodyear Commercial Europe.

For Goodyear, these extreme usage conditions are a unique opportunity to test the robustness and performance of its standard products and the casing technology it uses in the development of off road and on road ranges.

Kamaz entirely develops, designs and assembles the racing trucks it enters into the Dakar event and selected Goodyear as its tyre partner. Victory in 2020 was Kamaz-Master’s 17th Dakar win since it began participating in the rally in 1990.

GRI managing director: 2021 is a year to build