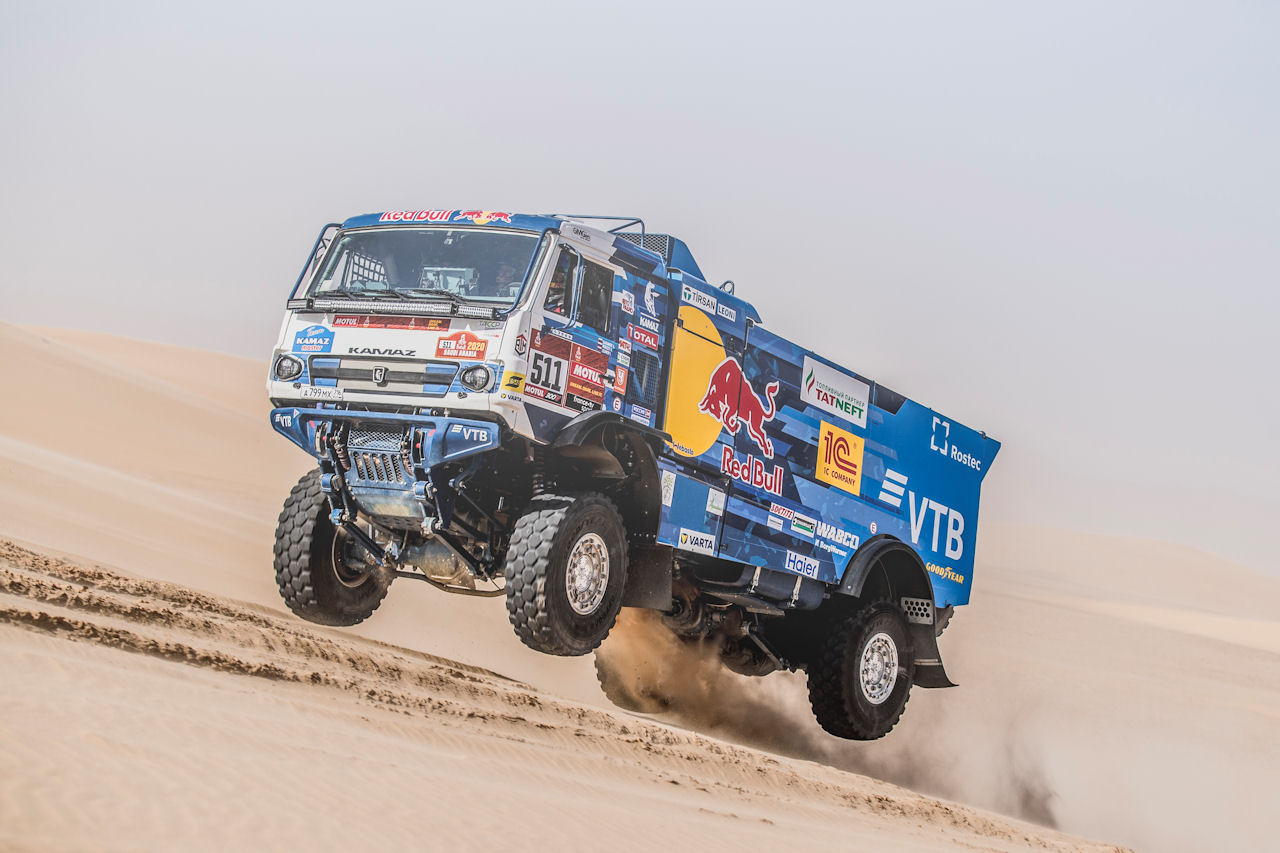 Kamaz-Master has notched up yet another Dakar victory. Last Friday, the team finished in first and second place in the Dakar 2020 after 12 challenging stages, winning the famous rally for the 17th time. As official tyre partner to Kamaz-Master, Goodyear is particularly pleased with the result.

The Dakar rally has gained a reputation over the years as being the toughest rally in the world. This year, the rally headed for new horizons in Saudi Arabia. The course covered some 4,700 miles, starting in Jeddah on 5 January and covering almost every corner of the Kingdom before concluding at the Qiddiya site in Riyadh. At each stage of the race, the trucks encountered a variety of challenges, from desert tracks with hidden stones to rocky canyons and river beds with sharp protrusions.

“On the outside the scenery was magnificent, however inside the truck we had to stay focused every second and work hard,” comments Andrey Karginov, driver of Kamaz-Master’s winning ‘511’ crew. “This year’s race included hazardous sandy dune stages and misleading labyrinths covered with sharp stones. We encountered many risky situations, but the Goodyear tyres kept on going offering supreme traction driving up the dunes and were extremely robust.”

With 17 victories, Kamaz-Master has achieved the greater number of wins in the Dakar rally’s history. Over the years, the team has built up an incredible amount of technical know-how. Although the environment was entirely new to them, the crews mastered the performance of their Kamaz trucks during each of the stages. At full throttle at up to 85 mph on the straights, including some spectacular jumps in the desert and blistering speed on risky tracks, they never wavered, and the winning team finished the course in just 46 hours, 33 minutes and 36 seconds.

“At Goodyear, we design our products to deliver winning performance for our partners. We are extremely proud that once again the victorious Kamaz-master team could count on exceptional qualities of our standard products proven in probably the toughest race in the world,” says Maciej Szymanski, director marketing Europe for Goodyear’s Commercial business unit. “This reconfirms very strong track record of Goodyear Offroad ORD tyres in durability, traction on rocky and sandy terrain and in very challenging circumstances at high speed.”

Optimum truck setup is key to a podium finish, and therefore truck and tyres need to work seamlessly together. Recent Dakar rallies Over the past years, the Dakar has been marked by teams finishing less than one hour apart after 12 full days of close racing. Every minute counts and any issue can have an impact and determine if the team reaches the podium or not.

Next level product testing and development

Rally organiser ASO stipulates that all truck teams must compete on standard tyres. They must be developed for normal daily operations and available for purchase by any fleet manager. Given the extreme driving, Goodyear considers races like Dakar are the ultimate testbed for its Offroad ORD. The tyres selected by the winning KAMAZ-master team are normally used to maximise uptime in tough off-road operations such as mines and quarries. Their blocky tread pattern partners with an optimised compound to provide high resistance to cuts and tears.

Experience gleaned during the Dakar rally, as well as Goodyear’s participation in the FIA European Truck Racing Championship, enables it to “take its development process to the next level.” Extreme testing conditions stress tyre casings to cope with deformation and extreme forces placed upon the tyre, such as the forces encountered during jumps on the Dakar course as well as when cornering at high speed in truck races. The result, says Goodyear, is advanced casing technology that offers enhanced durability and robustness and therefore a positive effect on fuel efficiency. This casing technology is available across the Goodyear commercial range for long-haul and regional haul, mixed-service, off-road as well as passenger carrying applications.

The next challenge for Goodyear and the Kamaz-master team is the Silkway Rally in China, which will take place between 3 and 16 July.