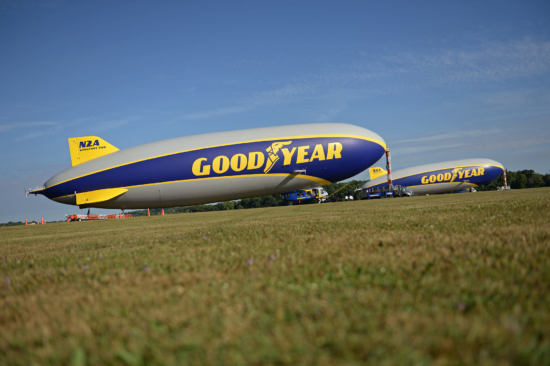 For the first time in nearly a decade, the Goodyear Blimp will take flight over Europe. The Goodyear Blimp operating in Europe will be a Goodyear-branded, Zeppelin NT airship, operated by Deutsche Zeppelin-Reederei GmbH of Friedrichshafen, Germany. This marks the latest chapter in a nearly 100-year relationship between Goodyear and Zeppelin.

The semi-rigid Zeppelin NT airship measures over 75m in length – nearly three quarters the length of a soccer field – and almost 18m in height. It is the same model airship as the three Goodyear blimps operated by Goodyear in the United States. It will act as a stunning brand ambassador for Goodyear as it soars over Europe, providing unique aerial coverage of key racing events and operating commercial (passenger) flights across Germany.

“The Goodyear Blimp is a true icon that has captured the imaginations of consumers and enthusiasts in the United States and across the world for nearly one hundred years,” said Mike Rytokoski, Vice-President and Chief Marketing Officer, Goodyear Europe. “Its return to Europe has been long-awaited and is the perfect way to celebrate our return to international motorsport, our new media partnership with Eurosport and the cutting-edge additions to our product portfolio.”

“Zeppelin is proud to be furthering and expanding our long-standing collaboration with Goodyear,” said Eckhard Breuer CEO of Deutsche Zeppelin-Reederei GmbH. “We look forward to adding Europe to our area of cooperation, giving our relationship a new, international dimension.”

More commonly seen flying in the United States at major sporting events including NASCAR races, NBA games and PGA golf events, the Goodyear Blimp is a European icon in its own right. It first arrived in Europe in March 1972, making its maiden flight in June that year in Cardington, England. Christened ‘Europa’, it took to the skies over Europe over the subsequent 14 years, appearing at a number of prominent sporting and cultural events, including the 1985 German Grand Prix at the Nürburgring, the 1986 French Open at Rolland Garros and even two British royal weddings, before being retired in 1986.

Goodyear blimps have returned to tour Europe in subsequent years, however today’s test flight from Friedrichshafen is the first time a Goodyear Blimp has flown in Europe since 2012.

The Goodyear Blimp will fly in the Friedrichshafen area and more widely around Germany over the coming weeks and is ultimately planned to provide aerial footage of some of the major remaining European races of the 2020 motorsports calendar.

This is designed to be a further, boost to Goodyear’s international racing comeback. The company has already been appointed official tyre supplier to the LMP2 class of the FIA World Endurance Championship (WEC) and the European Le Mans Series as of the 2021 season, and the British Touring Car Championship (BTCC) and, via a new media partnership with leading European sporting broadcaster, Eurosport, the FIA World Touring Car Cup (WTCR) and Pure ETCR, the first all-electric multi-brand touring car series, as of the 2020 season.