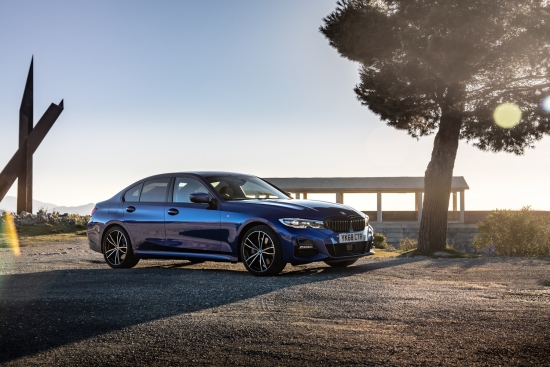 Ams fitted the 11 brands of tyre to a BMW 3 Series for testing (Photo: BMW)

To find the best tyres for the “dynamic mid-range segment”, German motoring publication auto motor und sport (ams) has taken a look at 11 products in size 225/45 R18Y. While the usual premium suspects claimed the victors’ podium, the ams test also confirms what Auto Zeitung recently found – that Maxxis is making some great value for money tyres at the moment.

But first, the winner: The ams test team named the Goodyear Eagle F1 Asymmetric 5 the winner of its 2020 summer tyre test. This “particularly good-natured” tyre offered the shortest braking distances on wet surfaces and proved “unbeatable” in the test. Ams found the tyre easy to control and grippy. Braking distances were good in the dry as well.

Third place belonged to the Continental PremiumContact 6. The ams testers found the tyre to be “precise and direct” and “strong on dry curves”. Its direct and precise steering qualities were also a good match for the BMW 3 Series that ams used for testing. Yet the motoring publication deemed the Continental tyre “no longer up-to-date” in the wet – in particular, the testers reported some limitations to aquaplaning safety.

The fourth-placed Pirelli P Zero is, shares ams, a “sovereign touring tyre” with particular strengths on dry road surfaces. Wet grip is also very good at lower speeds, however aquaplaning was an issue. In addition, steering on dry roads wasn’t as direct as it could have been and rolling resistance was on the high side.

Next came the Maxxis Victra Sport 5. Ams liked this tyre, calling it a “surprisingly affordable and surprisingly good” product that shares the mid-performance segment with tyres from Bridgestone, Nokian and Falken. Yet while the Maxxis tyre gave strong overall performance in the wet and dry, its wet braking result was less impressive than those from the top products in this test. Rolling resistance was also on the high side.

Ams considers the Bridgestone Turanza T005 a “comfortable all-rounder” and lauds its fuel-efficient low rolling resistance. Performance in wet conditions was trustworthy, and the tyre provided safe and easy-to-control dynamics in the dry. Drawbacks included a wet braking distance that was around two metres longer (from 80 km/h) than the test’s best result. Drive-by noise was high as well.

The testers describe the Falken Azenis FK510 as an “affordable product” with “reduced performance levels, but without serious issues.” Braking performance in dry conditions is very good. Noted issues include lateral control and traction on wet roads and “room for improvement” when it comes to protection against aquaplaning.

Although they praised the Nexen N’Fera Sport as an “extra quiet comfort king” with short braking distances in the dry, the ams testers noted “weaknesses on wet road surfaces”, including little grip and long braking distances. Rolling resistance is also high.

Ams said the tenth-placed Toyo Proxes Sport feels like a sporty tyre, but lacks performance. Wet grip is well balanced, albeit at a lower level than the best tested tyres. Steering is direct and precise in dry conditions. On the downside, issues with rear stability were noted during changes of load in fast curves as well as during lane changes. Rolling resistance is high as well.

The wooden spoon in the ams test went to the Giti GitiSport S1. The testers found the tyre’s good performance in the dry to be counterbalanced by weak wet performance, including long braking distances and “significantly limited” levels of grip. 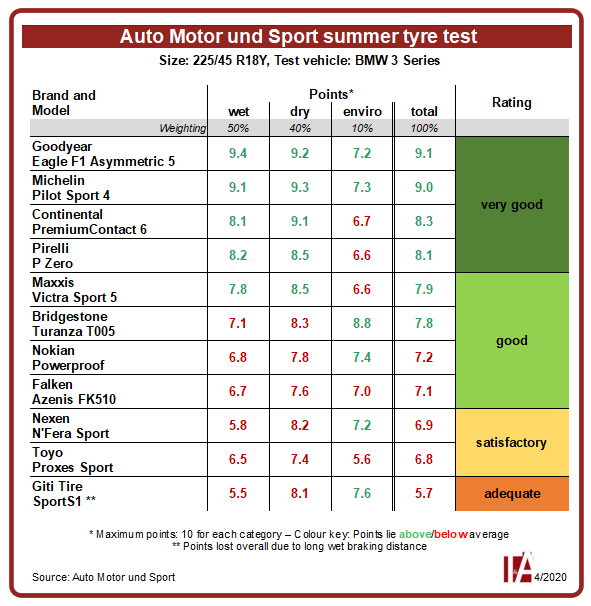