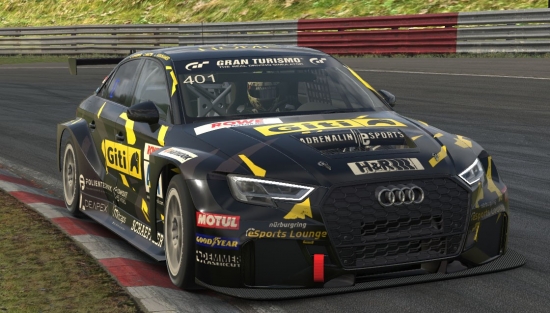 Martin said: “I am happy with our first race, especially given the little preparation time we had. I was consistent and didn’t go off track, it was a very good training concentration wise. I also discovered some things I would like to try in real life. Now I will train hard to be ready for the next one.” The team’s Audi required a pit stop early in the race to fix the damage resulting from a collision with a competitor.

To improve online visibility, the WS Racing simulator, supplied by the Nürburgring eSports Lounge was fitted with cameras which live streamed Schreiner and Martin throughout the race. This footage could be watched in full and clips were shown during the live broadcasting.

Stefan Brohs, marketing director Europe at Giti Tire, added: “We launched our eSport approach last year which has placed us in the position to participate in virtual racing on an expert level. To participate with professional drivers from WS Racing and experienced simracers opens up great marketing potential.”

The German broadcast of the race includes an interview with Carrie Schreiner at 03:50:00.