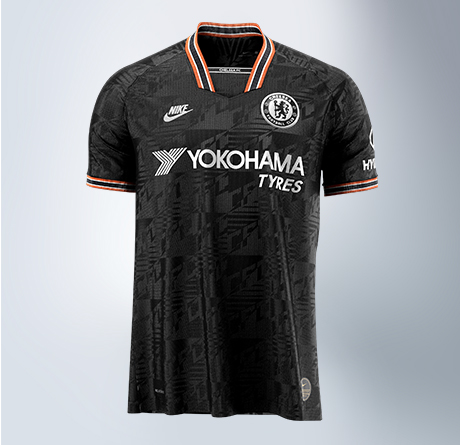 Chelsea FC has revealed its new third kit for the 2019/20 season, with shirt sponsor Yokohama Tyres’ logo in place across the front. The reigning UEFA Europa League champions have styled the shirt with several nods to the 1990s, another good era for the Stamford Bridge club.

Although clean and modern in shape and athletic performance, the predominantly black kit features flashes of bright orange, similar to the away shirt worn between 1994 and 1996 by such greats as Ruud Gullit. As well as the nostalgic use of orange, the jersey boasts numerous other nods to ‘90s football, with a jacquard knit rising from the fabric of the shirt, an old-school style collar and a retro Nike ‘Futura’ logo.

The historic nod of the new shirt complements the team’s white away kit which is inspired by the Mod culture that thrived on the King’s Road in the 1960s and the team’s traditional blue home kit which is inspired by Stamford Bridge, home of the club since 1905. All three shirts proudly display the Yokohama logo giving the premium tyre manufacturer significant global brand exposure, regardless of whether the team is playing home or away.

The 2019/20 Chelsea FC third shirt is now available for fans to buy directly from the club’s official store.