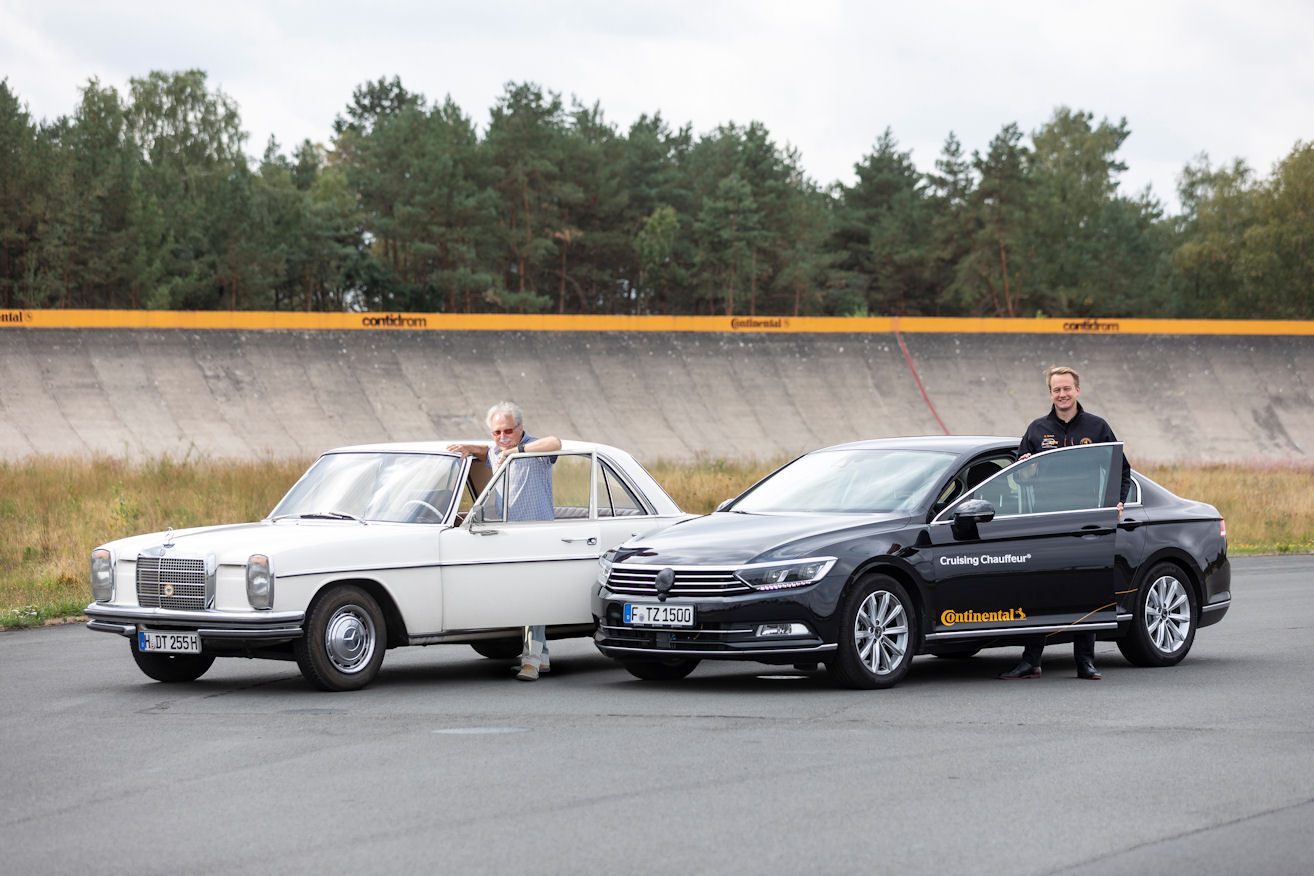 Driverless cars? Continental had those 50 years ago…It is exactly half a century today since the tyre maker demonstrated its first electronically controlled driverless car at its Contidrom facility in Germany. In those days a car cruising the Contidrom circuit without someone behind the wheel was a novel sight, to say the least, and Continental recalls that more than 400 newspapers, magazines, radio stations and television channels reported on the events of 11 September 1968.

The purpose of the driverless car project was to determine how tyres could be tested with greater precision using scientific methods under programmed conditions, however the Continental engineers were pushing the limits of what was technically possible at the time and, in a sense, paving the way for the future of driving. While they didn’t achieve all they set accomplish, the test system set up in 1968 can be considered the forerunner of today’s automated tyre testing facilities.

“We salute the inventive pioneering engineers who developed a driverless car five decades ago,” says Dr Elmar Degenhart, chief executive officer of Continental. “In doing so, they achieved a significant technological milestone in our corporate history, which boasts a wealth of innovations. The driverless car of 1968 represents an ongoing common objective at Continental, then a tyre manufacturer and now a technology company, which is ensuring safe, clean and intelligent mobility in the future.” The driverless Mercedes on the Contidrom track in 1968

The driverless vehicle was based upon a Mercedes-Benz 250 Automatic. Systems for the driverless test vehicle were developed for Continental by Siemens, Westinghouse and researchers at the technical universities of Munich and Darmstadt. The vehicle was guided by a wire on the road surface, with sensors in the car’s electronic system detecting whether it was still on track and automatically adjusted the steering accordingly.

“Ultimately, it was a car that drove by wire,” remarks Hans-Jürgen Meyer. Now 78 years old, 50 years ago the former engineer was responsible for the development of new measurement methods for providing objective tyre analyses. Measurement coils attached to the vehicle detected a magnetic field emitted by the wire attached to the road surface; this system enabled precision electronic control.

The engineers installed a range of equipment in the Mercedes, including electro-mechanical steering, an electro-mechanical throttle regulator and a radio system for reporting measurements – cutting-edge technology at the time. In addition, the bumpers were adorned with an array of antennas, with the control electronics and an electro-pneumatic braking system housed in the boot.

Via a wire to the car, the control station next to the test track sent commands telling it to brake, accelerate or sound the horn. The benefit of the completely new test system was that ruling out the possibility of human influence resulted in far greater measurement accuracy. The testing also enabled the Contidrom, which had opened the year before, to be used to its full capacity for the first time.

“Measurement technology was still in its infancy back then, and we had developed a lot of it ourselves,” explains Herbert Ulsamer, who began his career at Continental as an automotive engineer in 1965 before retiring in 2006. “Research and development at Continental was undergoing radical change at the time.”

Ever stricter requirements upon tyres called for a more thorough approach to research and testing. At the time, more than 1,000 developers were working at Continental on new rubber compounds, tyre designs and treads. Today, around 1,300 engineers work at the company’s Stöcken campus (near its headquarters in Hannover, Germany) alone. They develop new tyre models for cars and commercial vehicles as well as for specialist vehicles such as forklift trucks and agricultural machinery. Over its entire range of products and technologies, Continental employs around 44,000 people in research and development.

“For us young engineers, the e-car was like a great big toy,” says 76-year old Meyer with a smile as he shares memories with former colleagues Ulsamer and Klaus Weber, now aged 81, at an anniversary event at the Contidrom. To the three retired engineers, the “e-car” is not a modern electric car but their ‘electronically controlled car’. “When you went out in the car, you would constantly see and hear the stepper motor working away on the steering wheel, always making a clicking sound,” recalls Meyer. “For employees like us, the car was and everyday thing, but for the visitors from all over the world it was hugely impressive and fascinating to see a car cruising around without a driver. They saw that Continental was doing something truly extraordinary.”

Working upon the project exposed the Continental engineers to memorable experiences working at the forefront of what was then state-of-the-art technology. “There was a pilot phase, during which test runs with the e-car took place at night as well. The aim was to use it as efficiently and effectively as possible. That meant I would stand at the control station while the car drove through the night. You would see the headlights appearing and disappearing again and again. Sometimes, though, the car wouldn’t come past. This meant that it had lost the wire and had stopped automatically,” says Meyer.

Right from that very first driverless vehicle at Continental, development activities were focused on safety in the event of an accident. “The steel structure in the concrete track probably diverted the magnetic field slightly every now and then,” explains Weber, who worked for the ‘Electronics’ group as a mechanical engineer and electrician in 1968. “As long as it was going in a straight line, everything was fine. But we were particularly interested in lateral aquaplaning – in other words, how the vehicle handled in bends on a wet road. And then often, quick as a flash, the car would lose the wire and come to a halt. There was also a sheet of glass built into the track, and underneath that was a high-speed camera taking 10,000 photographs per second. The goal was to see how the blocks in the tread behaved when the car was in motion. The wire had to be laid in such a way that the tyres of the e-car rolled exactly over the sheet of glass. That sometimes worked well, but often didn’t work at all.”

The driverless car was one of the main attractions for visitors to the Contidrom at numerous events between 1968 and 1974. Yet despite all the innovations, the objective of the automated vehicle test for tyre development wasn’t yet achievable at that time.

“Ingenuity, creativity and a pioneering spirit are part of Continental’s DNA,” commented Kurt Lehmann, corporate technology officer at Continental and in charge of the corporation’s long-term technology strategy. “Today, we are working on the future of mobility, just as we were 50 years ago. While the magnetic field of a wire was responsible for the car’s ‘navigation‘ at the Contidrom in 1968, we now use on-board computers, satellite navigation and advanced driver assistance systems. Back then a single main computer gathered the results produced by the electronically controlled car, but now we connect more and more cars directly via the Internet. We are now working on automated and autonomous driving – on highways, in cities, and to help with parking.”

Continental is working towards achieving the goal of seamless, automated mobility without accidents in all variations. To that end, the company is currently working on getting highly automated driving ready for production and, at the same time, on the systems necessary to enable fully automated driving on motorways by 2025. Highly automated motorway driving in itself is designed to allow car drivers to temporarily focus their minds on activities other than driving. With fully automated driving, this should be possible for sections of the route without the driver having to act as a fallback mode at all. Continental also believes in autonomous driving. The technology company is testing components and systems for driverless robo-taxis in cities with its Continental Urban Mobility Experience (CUbE) test platform. At the same time, Continental is already pursuing the concept of developing vehicle systems for autonomous vehicle fleets in the distant future. If Continental’s plans come to fruition, the BEE (not only a reference to the insect, but also short for Balanced Economy and Ecology mobility concept) will one day form a swarm of autonomous vehicles of various sizes and configurations, all powered by electricity.

Fifty years after the driverless Mercedes blazed a trail at the Contidrom, Continental is now working on the next generation of test systems for reliable, efficient and reproducible tyre tests in real-life conditions. The challenges that presented themselves back then are motivating current developers to make full use of the opportunities that the company offers today. “Even though the vehicle did not fulfil all expectations at the time, it was still a remarkable project from a modern-day perspective. Continental showed a willingness to take risks and break new and truly revolutionary ground back then – and it continues to do so to this day,” says Thomas Sych, head of global passenger and light truck tyre testing in Stöcken. “Ultimately, you can draw a straight line from the test pioneers at the end of the 1960s all the way to our test systems today.

“Since 2012, we have been conducting many of our tyre tests on the test tracks in the AIBA (Automated Indoor Braking Analyzer) building at the Contidrom, where the tests are automated and completely unaffected by the weather,” Sych adds. “Fifty years to the day since the e-car took to the track at the Contidrom, we are now deploying a driverless tyre test vehicle based on the Continental Cruising Chauffeur in Uvalde, Texas.”

The new driverless tyre test vehicle for the test facility in the USA is based upon the Cruising Chauffeur system that Continental developed for highways and adapted to suit tyre test requirements. Whereas Cruising Chauffeur development focused primarily on assisting the driver with automated driving on motorway routes, the team of developers working on the Uvalde test vehicle is taking things much further. The tyre test vehicles are designed to drive autonomously along the test track, which means there is no longer any need for a test driver to sit in the vehicle while it is put through its paces. The medium-term plan is for multiple autonomous vehicles to cruise around the track at the same time, all monitored from a control centre. The main goal is optimising endurance testing on the different tracks in Uvalde. At present, test drivers have to pilot the vehicles hundreds of miles in scorching heat and extreme environmental conditions to identify potential weaknesses in new tyre designs and rubber compounds. Thanks to automation and the ability to control vehicles down to the very last centimetre, it should be easier to compare results. Furthermore, wear on the track can be minimised by optimising the way in which the vehicles drive on the track. These are very similar objectives to those in place at the Contidrom 50 years ago, when engineers Ulsamer, Weber and Meyer wrote test history with Continental’s driverless car.