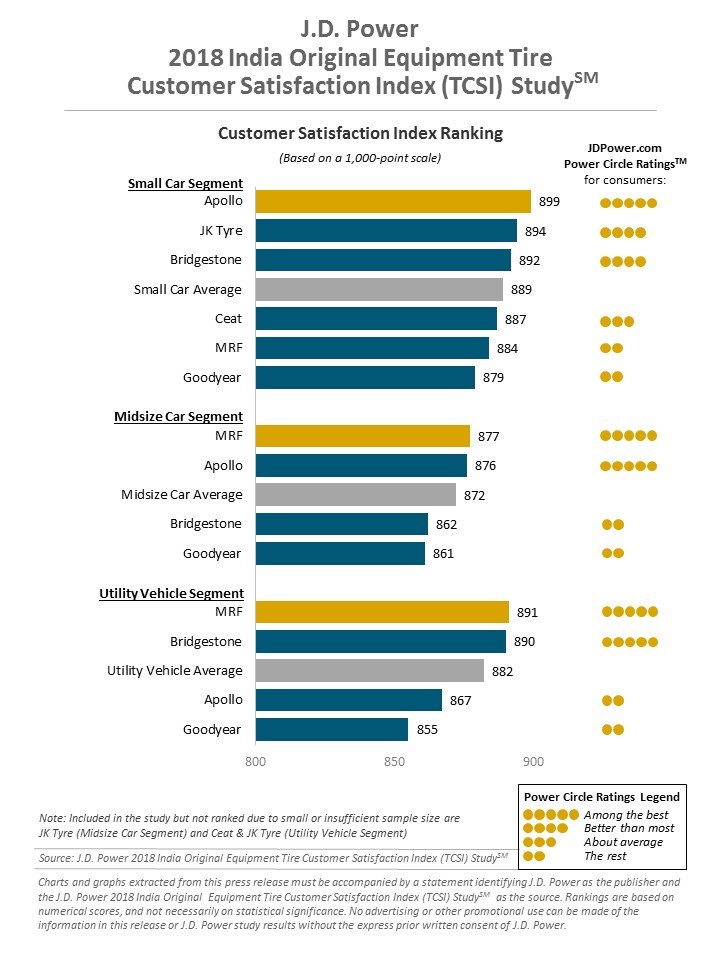 Satish Sharma, president, Asia Pacific, Middle East & Africa (APMEA), Apollo Tyres Ltd commented: “This ranking is a testimony of our consistent efforts towards improvement in product quality across categories. The numero uno ranking in small cars is a great achievement, considering that the hatchbacks translate into more than 50 per cent of all the cars sold in India.”

Apollo tyres are fitted as original equipment on eight of the top ten cars sold in India, and the Apollo brand’s share of the OE market in India for small and medium-sized cars is close to 30 per cent.

In addition to coming first in the small car segment by attaining 889 out of a possible 1,000 points, Apollo was, with 876 points, close runner-up in the mid-size car segment behind MRF. JD Power gave Apollo Tyres five-star ‘Power Circle Rating’ in both categories, the top rating awarded to companies that are considered “among the best.”

The third vehicle category covered, the utility vehicle segment, didn’t deliver a strong result for Apollo; with a total of 867 points, the brand finished below the category average.

The 2018 India Original Equipment Tire Customer Satisfaction Index (TCSI) Study is based on 3,620 responses from new-vehicle owners who purchased their vehicle between May 2015 and August 2016. The study was fielded between May and August 2017. The study, now in its 18th year, measures satisfaction among original equipment tyre owners across three segments: small cars, midsize cars and utility vehicles. The study covers the first 12 to 24 months of ownership across four factors (listed in order of importance): appearance; durability; ride; and traction/handling.

Hankook Tire: Together with Europa League until 2020-21