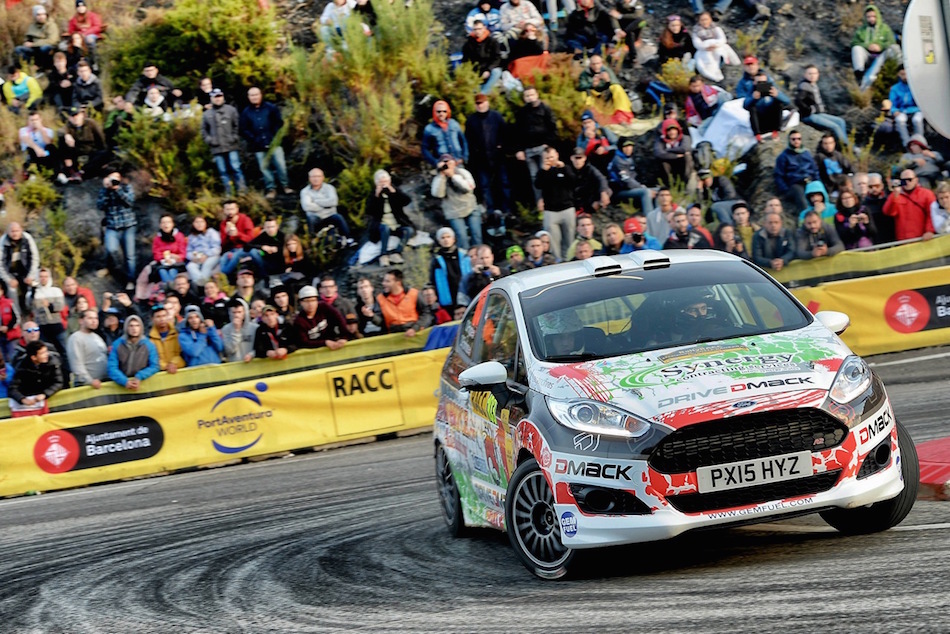 Osian Pryce and Dale Furniss have won the Drive Dmack Fiesta Trophy following a thrilling final round in Spain. The Welsh pairing narrowly held off a gutsy late challenge from Max Vatanen. The championship was, for the third time in as many years, in the balance until the very last stage of the season finale. The trophy, sponsored by tyre brand Dmack, aims to provide a training ground for budding world rally stars.

Pryce and Furniss led the overall standings going into this weekend’s year-ending RallyRACC-Rally de Espana, but an electrical problem on Friday saw the Welsh team plunge down the Spanish leaderboard. By contrast, Trophy veteran Vatanen pulled out all the stops and remained in close pursuit, benefiting from past experience of the event. He was ultimately unable to overhaul 23-year-old Pryce and Furniss, 28, at the championship summit.

A new competition prize structure saw a total of three pairs of WRC2 prize drives offered to crews competing in what proved once again to be an ultra-competitive Drive Dmack Fiesta Trophy. Dmack says the revamped format proved a huge hit, with three different talented young crews now having a chance to strut their stuff on the WRC2 stage.

Jon Armstrong became the third of these in Spain, winning the last pair of prize drives to round off a memorable year. The Northern Irishman, along with co-driver Noel O’Sullivan, tasted victory at the final rally of the season, and was the top points-scorer over the final two events in Germany and Spain. Armstrong, 21, made his Trophy debut at last year’s RallyRACC-Rally de Espana, and used his knowledge of the stages to lead throughout this weekend. It was his second race win of the season, following his triumph at Lotos Rally Poland. He has also claimed the top Rookie award and was third overall in the final Trophy standings.

The weekend saw 10 crews from across the world tackle the only mixed surface outing of the season at a rally based in the holiday resort of Salou. They were confronted with treacherous conditions on Friday when torrential rain turned gravel roads into mud baths. There followed a busy extended evening service for the M-Sport team as competitors’ identical Ford Fiesta R2 cars were switched to Tarmac specifications. This brought a change of suspension, the addition of bigger brakes and a move to Dmack’s asphalt tyres for the final two days on Spain’s fast-flowing roads.

Dick Cormack, Dmack managing director, said: “The Trophy continues to grow from strength to strength and this year has seen even more intense rivalry. Jon’s driven a very impressive rally to win this weekend but Osian also deserves the title. Max has benefitted also with the new prize drive structure, which has turned out to be a real success.”

Malcolm Wilson, M-Sport managing director, said: “It’s been another fantastic year with competitive performances from all of our Fiesta R2 drivers. Once again, the championship has come down to the wire and we’ve witnessed some intense and extremely close-fought battles throughout the season.

“Congratulations to all of this year’s crews, but especially to Osian, Max and Jon who have each secured two prize drives for next year. Our intention was to award those who delivered exceptional performances, and I think we have three very worthy winners who now have the opportunity to show what they can do at the next level.”

Osian Pryce from Wales said: “We’ve been both unlucky and very lucky this weekend. It’s been a bit of a rollercoaster season with great battles with Max and we’re just over the moon to pull it off today. We did the best we could all weekend and to be rewarded like this after many months and years of hard work is just a great feeling.”

Max Vatanen from Finland said: “It was a tight battle but we had good speed today and everything went pretty well. Unfortunately a number of crews retired so that was not really in our favour, but congratulations to Osian and Dale. On the positive side, we have come away with two WRC2 drives for next year so that’s a big bonus.”

Jon Armstrong from Northern Ireland said: “I’m overwhelmed, it’s been a fantastic weekend. We set out trying to have a clean run on the gravel and we did that. We had a good lead and managed to hold it for the rest of the rally, it’s fantastic. To win two rallies is more than I could have dreamed of and to get the two drives for next year is just great. It’s going to be amazing experience and we’re really looking forward to it.”