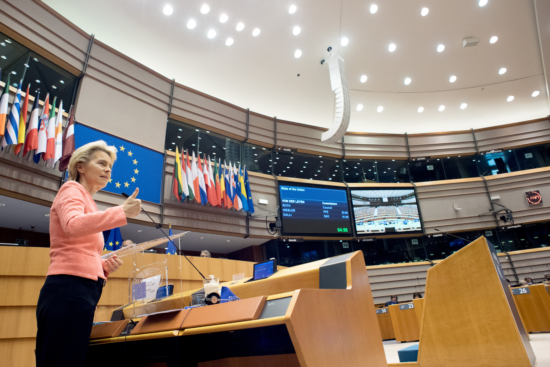 On 19 January 2021, 26 Members of the European Parliament wrote to Oliver Várhelyi, the European Commissioner for Neighbourhood and Enlargement Negotiations about concerns relating to “growing Chinese influence in Serbia and the impending environmental damage resulting from several heavy industrial projects in Serbia by Chinese owned companies”. The group are particularly interested in scrutinising Serbia’s apparently “generous” subsidies and environmental compliance protocols.

The letter was initiated by Miriam Lexmann MEP (EPP/Slovakia) and Reinhard Bütikofer MEP (Greens/EFA, Germany), both co-chairs of the Inter-Parliamentary Alliance on China (IPAC). Most of the signatories were left-wing or left-leaning politically. However, centre-right representatives were also found amongst the 26. The letter draws attention to a number of Chinese industrial investments and specifically names the Shandong Linglong tyre plant in Zrenjanin, calling on the Commissioner to remind the Serbian government to “adhere to its national legislation as well as EU rules as pertains to the accession process”.

Has the Linglong Serbia ‘project of national interest’ been leased ‘free of charge’? 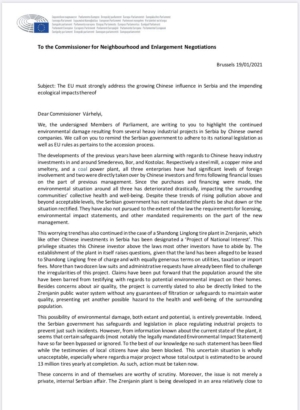 On 19 January 2021, 26 Members of the European Parliament wrote to Oliver Várhelyi, the European Commissioner for Neighbourhood and Enlargement Negotiations about concerns relating to “growing Chinese influence in Serbia” (Photo: Miriam Lexmann)

Referring to the Shandong Linglong tyre plant in Zrenjanin by name, Lexmann wrote of the trend towards naming Chinese investments as projects of national interest: “This privilege situates this Chinese investor above the laws most other investors have to abide by.” Questions the 26 MEPs want to address include the subsidies offered to Linglong as well as environmental compliance: “The establishment of the plant itself raises questions, given that the land has been alleged to be leased to Shandong Linglong free of charge and with equally generous terms on utilities, taxation or import fees”, Lexmann wrote.

As Tyres & Accessories reported during the summer of 2020, Linglong has faced protests and legal action within Serbia. However, according to Lexmann’s letter there have actually been “more than two dozen law suits and administrative requests” filed “to challenge the irregularities of this project”.

The signatories’ environmental concerns centre on air quality and water hazards since the “project is currently slated to also be directly linked to the Zrenjanin public water system without any guarantees of filtration or safeguards to maintain water quality, presenting yet another possible hazard to the health and well-being of the surround population”.

“These investments and their impact are emblematic of China’s growing influence in Serbia and elsewhere. Chinese investment projects lack transparency and sustainability and, as well as environment damage, they also have a corrosive effect on governance. This is why it is important that the European Union calls on the Serbian government to address the impact of these investments, as well as honouring and following both their own domestic legislation and the regulations passed down as part of the EU accession process”, said Miriam Lexmann MEP.