The Bridgestone Weather Control A005

The improvement in the quality of all-season tyres has supported their sustained growth in Europe. While the latest test by the DACH region’s leading auto clubs continued to characterise the product as an unrecommended compromise, German magazine ratings this year have been much less snooty about the segment. Joining the UK’s leading consumer testers in praising the latest generation of year-round fitments, was AutoBild, among the industry’s most coveted ratings, while the most recent Sportauto test gave six out of the seven candidates “good” or even “very good” overall grades. The test acknowledges the advantages of seasonal rubber via two Bridgestone control tyres, the Turanza T005 summer tyre and the Blizzak LM005, but also points out the “amazing qualities” of the seven test subjects on cold-wet and cold-dry roads. The seven all-season tyres were tested in size 225/45 R18 on a BMW 330i. 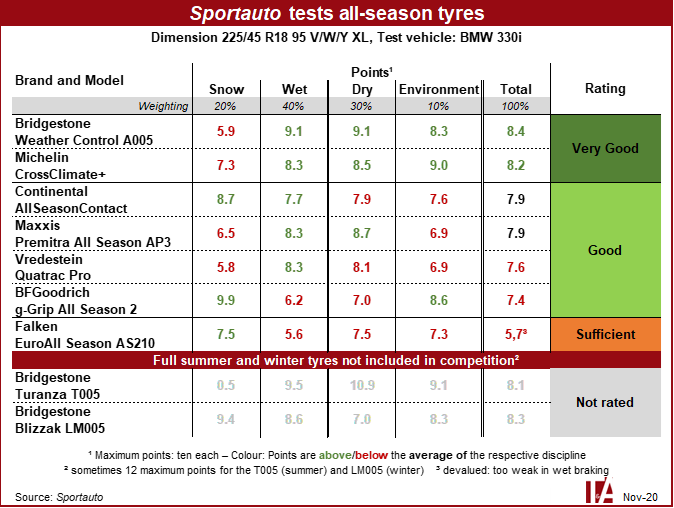 Bridgestone’s Weather Control A005 – not the Evo development of its all-season profile – was the test’s overall winner. Testers praised its “very short braking distances and safe, precise handling in the wet.” It also demonstrated “easily manageable, dynamic dry handling properties” close to the level of summer tyre performance, Sportauto added. The tyre was criticised for its grip and sharp loss of traction on snowy roads.

Michelin’s CrossClimate+ was ranked second in the test, also given the “Very Good” ranking. Sportauto said the tyre was sensitive to slippage on snow and therefore not recommended for vehicles without electronic stability control. It also identified “slight compromises” in aquaplaning protection and comfort because the tyre generated a buzz when cornering. However the tyre delivered a “reliably calculable winter performance” with somewhat longer braking distances, and it is also “precise, grippy and easily manageable in wet and dry corners”.

The Continental AllSeasonContact, the Maxxis Premitra All Season AP3, Vredestein’s Quatrac Pro and the BFGoodrich g-Grip All Season 2 were all given the “Good” rating by Sportauto, ranked in that order.

The four tyres were marked too low for the highest rating in the test for different reasons. Conti’s tyre led to “longer braking distances on wet and dry asphalt” and “a slight tendency to oversteer when changing loads in fast bends.” Maxxis’s Premitra All Season AP3 impressed enough to equal the overall ranking of the Conti tyre, impressive enough for the Taiwan brand. Sportauto said that “poorly balanced traction to cornering ratio on snow” and “slightly longer braking distances on wet,” together with a weak hum when coasting cost the tyre an even higher ranking.

The Vredestein profile was criticised for too much understeer and low reserves in snowy corners, despite equalling the Michelin tyre’s wet performance. The second Groupe Michelin tyre in the test from BFGoodrich had “significant deficits when braking on dry, but especially on wet roads.” Combined with “low reserves in the wet and when cornering on dry roads” the tyre came in sixth place, but was comfortably the best all-season performer on snow, scoring 9.9 out of 10.

Falken’s Euroall Season AS210 was deemed to have “acceptable performance on snow and on dry roads,” but was marked down enough to receive only the Sportauto “Sufficient” rating due to longer braking distances on snow-covered and dry roads. Vehicles without a control system also had an increased risk of oversteer on snow with the tyre. However, the tyre’s “very weak braking and inharmonious handling in the wet” led to the testers docking the tyre one point in the overall standings. This meant that the testers skipped the “Satisfactory” grade boundary, with Sportauto ultimately making the Falken tyre merely “Sufficient”.

MTS responding to recovery in a tyre market altered wholesale