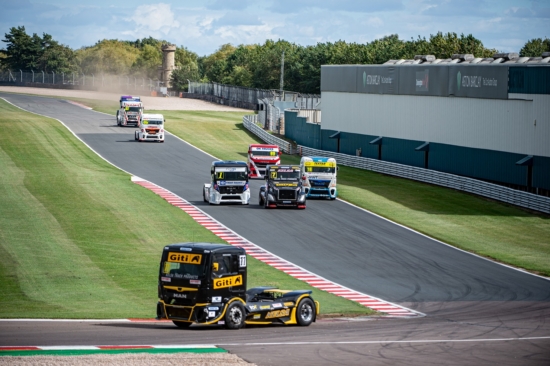 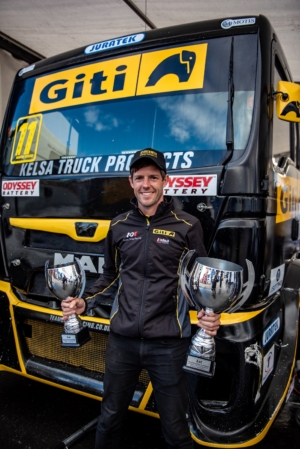 Giti Tire continued its excellent start to the shortened 2020 BTRC truck racing season at Snetterton on 19-20 September, securing four podium finishes in five races. In race one qualifying Martin Gibson, the company’s manager EU Testing Centre & Motorsport UK secured pole position and Stuart Oliver joined him on the front row at the Norfolk circuit. The pair swapped positions during the race as Oliver headed the team’s first ever one-two finish. Oliver also won race three, with Gibson on the third step of the podium.

Gibson entered this season in a new fully race-prepared and liveried MAN TGX 18.480, which employs a 12.9 litre D26 engine capable of producing 1,000BHP and weighs 5,300kg. At the first meeting of the season at Donnington (August 22-23) the team secured five podium finishes across five races, the highlight of which saw Gibson win his first-ever BTRC race despite starting from the second-last row of a reverse grid.

Gibson said: “To have set the fastest lap and qualify in pole position for the very first race, and to achieve a one-two finish, really was the start of an incredibly special few days. There were quite a few technical issues but we managed to overcome these as they occurred.

“More importantly is the consistency of the tyres, which are proving themselves time-and-time again in race conditions. For Snetterton we chose to run the same tyres on the rear that did the whole Donnington event, proving not only their race performance but also their durability.”

Both trucks run on Giti Race-Tuned v1 global competition truck tyres in size 315/70R22.5, which are available to purchase by any team across Europe via Truck Sport UK.

The tyre has been specially designed with an even pressure distribution and footprint optimisation assuring competition cornering and braking performance.

Design features include unique outside and inside shoulders, two longitudinal grooves and advanced sipes shape, orientation and distribution, while the racing compound has a special polymer for better grip, distinct functional resin for better handling and CB/silica blending for increased tear resistance.