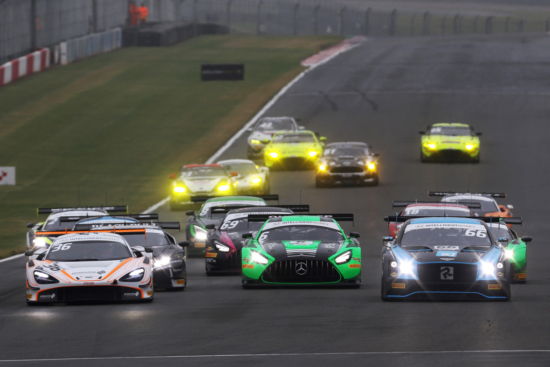 Pirelli travels to Brands Hatch this weekend for the third round of the 2020 British GT Championship. The Kent circuit is “a track where the drivers can really exploit the full performance of their cars and our latest tyres,” according to the series’ exclusive tyre supplier. GT3 competitors will use Pirelli’s new P Zero DHE tyre, an evolution of the previous DHD2, with modifications designed to make it even more versatile for the wide variety of GT3 cars and drivers who use it. There’s another new tyre for GT4 as well, with the P Zero DHB replacing the DH. The Cinturato WH tyres remain in place for wet weather.

Jonathan Wells, Pirelli UK motorsport manager, said: “The tyres are actually helped quite a lot by the natural undulations of the Brands Hatch circuit. For example, Paddock Hill Bend is certainly spectacular, but it’s possible to carry lots of speed there as the entry is quite wide. The Druids Hairpin is obviously the slowest corner, but you don’t load the front axle under braking as much as you’d think as it’s such an uphill gradient on entry.

“The hardest section for the tyres is the long radius high-speed section from Hawthorns round to Sheene Curve, just because the tyres on the left are leant on for so long. Stirlings, although tight, is another very quick corner, as it’s naturally cambered towards the apex. So it’s a track where the drivers can really exploit the full performance of their cars and our latest tyres.”

Fresh from a pair of second-place finishes at a damp Donington Park in round two, the Barwell Motorsport Lamborghini duo of Adam Balon and Phil Keen lead the standings on 67 points, 11 ahead of the Ram Racing Mercedes combination of Sam de Haan and Patrick Kujala.

But with a two-hour endurance race ahead of the competitors this weekend and the return of the most successful driver in British GT history – Jonathan Adam – everything is still wide open.

Just like the previous round at Donington, there are 13 cars entered: with Jonny Adam and Andrew Howard’s single-round presence eagerly anticipated in their Beechdean AMR Aston Martin Vantage AMR GT3.

While the AF Corse Ferrari of Matt Griffin and Duncan Cameron will be missing this weekend, the Stellar Motorsport Audi R8 GT3 of Sennan Fielding and Richard Williams will be making its first start of the season.

Keen to make inroads into the championship lead will be the McLaren 570S pairing of Chris Wesemael and Gus Bowers for HHC Motorsport, following their Race 2 win at Donington.

Strong showings from the Balfe Motorsport McLaren of Mia Flewitt and Euan Hankey at Donington also put them in the mix, with the Toyota GR Supra GT4 of James Kell and Sam Smelt additionally aiming high.