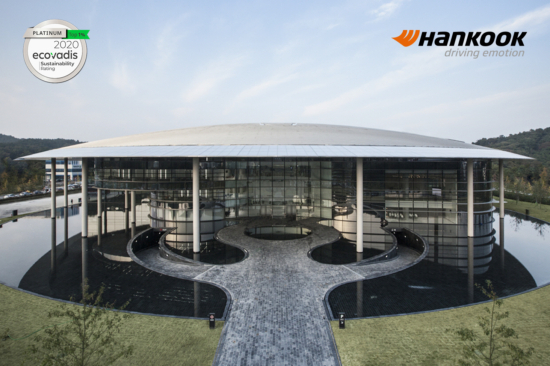 Tyre manufacturer Hankook has received a platinum medal for its corporate social responsibility (CSR) engagement. The medal was awarded by the French rating agency Ecovadis in particular recognition of Hankook’s sustainability initiatives. The medal is awarded to companies in the top one per cent of their industry sector.

Hankook received the honour for its clear CSR objectives, its participation in various sustainability initiatives, and its CSR-related policies, it states. The company has targeted the use of 100 per cent sustainable materials and a 50 per cent reduction in greenhouse gas emissions by 2050 versus 2018. The company also participates in sustainability initiatives with the United Nations Global Compact (UNGC) and promotes CSR-related policies such as the Sustainable Natural Rubber Policy. According to Ecovadis, Hankook is now in the top one per cent of 353 rubber product manufacturers worldwide in CSR.

The award improves on the gold medal, honouring the top five per cent of companies, Hankook received in 2019. Ecovadis introduced the platinum medal this year, which Hankook says has allowed it to “clarify its position”.

“Hankook is honoured to be, once again, recognized by Ecovadis. We believe this is a statement to our efforts in building a sustainable ecosystem for the industry as well as our pursuit of being socially responsible in every aspect of the business,” says Sanghoon Lee, president of Hankook Tire Europe. “We take great pride in our sustainability initiatives, and will continue our commitment to make the world that we live in a better place.”

Hankook’s focus on CSR and sustainability has also led to its inclusion in the Dow Jones Sustainability Indices World (DJSI World) for four consecutive years since 2016. In 2019, Hankook was the only Asian company in the automotive supply industry to be listed in DJSI World.

Ecovadis’s ratings are divided into four areas: environment, labour and human rights, ethics, and sustainable procurement. The institute assesses around 6,500 companies from 160 countries around the world, awarding gold, silver and bronze medals in addition to platinum. Hankook states that the organisation is well trusted among European car manufacturers.