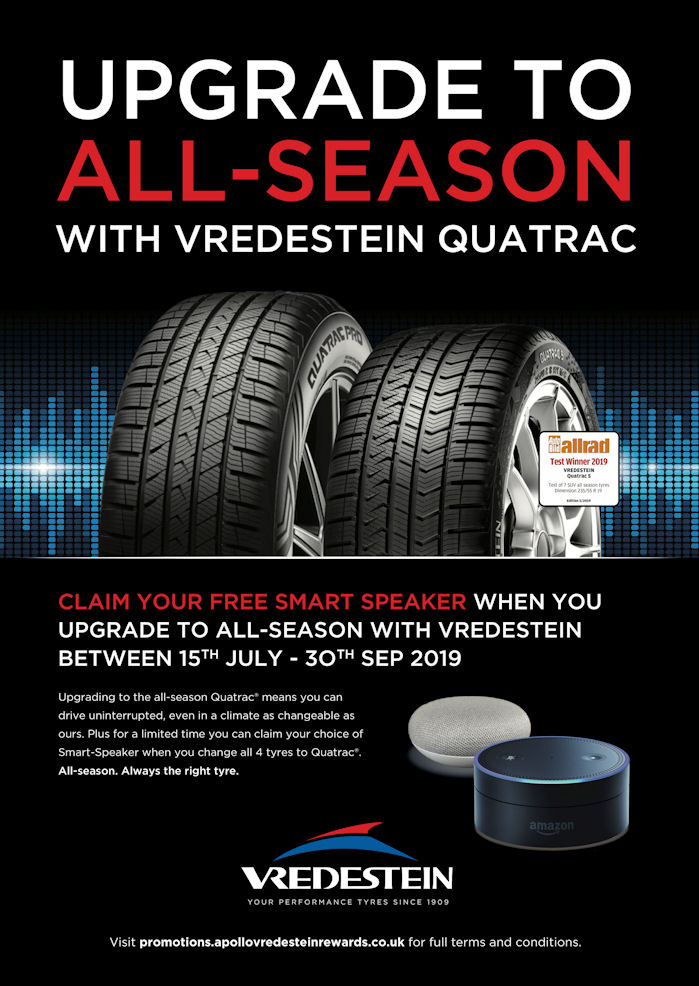 Apollo Vredestein has launched a consumer-focused campaign in the UK to promote the use of all-season tyres: Until 30 September 2019, all purchases of four Vredestein Quatrac all-season tyres at participating dealers qualify for a free Google Home Mini or Amazon Echo Dot.

By focusing its campaign on all-season tyres, Vredestein aims to remind road users that both its multiple test-winning Quatrac 5 and new Quatrac Pro all-season tyres are a smart choice for the unpredictable British weather.

The tyre making centenarian boasts more than a quarter century in all-season tyre development; the Quatrac 5 was, in 2014, its first all-season tyre with a Y-speed rating. Vredestein further strengthened its leading position in the all-season segment in Europe this year, with the launch of the Vredestein Quatrac Pro, which is designed for the ultra-high performance (UHP) segment.

“Upgrade to all-season with Vredestein Quatrac, our campaign’s headline, is a strong message,” says Karl Naylor, Apollo Vredestein UK country manager. “Market data show that demand for all-season tyres has grown significantly year-on-year, more than 20 per cent for passenger cars, with over twice that level within UHP car sizes, and even more dramatic, over 60 per cent for SUVs. Vredestein is undisputedly recognised for its expertise in this particular segment of the market, and with the recent Quatrac Pro introduction, in many sizes we are the only brand in the market to offer an all-season option.

“Equally encouraging for us is that the data highlights a shift in consumer demand; previously all-season sales were mainly through consumers opting for all-season during the colder months instead of choosing winter tyres, but we now clearly see growth throughout the year as all-season is chosen instead of standard summer tyres.”

Customers who purchase a set of four Quatrac (5 or Pro) tyres at participating dealers can claim their free smart speaker by visiting www.promotions.apollovredesteinawards.co.uk. Terms and conditions apply.