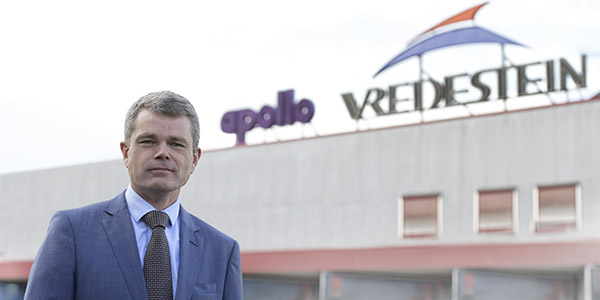 A promotion for Benoit Rivallant. After serving as group head of global product management for commercial vehicles and OTR tyres at Apollo Tyres since August 2014, Rivallant has been tapped to succeed Mathias Heimann as president of Apollo Tyres’ European Operations.

“It is our corporate philosophy to identify, nurture and promote talent internally. Benoit, with his rich and varied experience, is the right person to further lead Apollo’s growth strategy in Europe,” said Neeraj Kanwar, vice-chairman & managing director, Apollo Tyres Ltd on this change in leadership.

Rivallant, aged 53, has over 30 years of tyre industry experience in Europe, Asia and Oceania. He entered the industry through a position with Michelin during his military service in 1988 and remained involved with the tyre maker for the next 26 years, his last position being as vice-president of earthmover and industrial tyres for Michelin in Asia.

Speaking on his appointment as president, Europe for Apollo Tyres Ltd, Rivallant said: “I am looking forward to leading a well-established team of professionals and increasing the footprint of our brands Apollo and Vredestein in the European market. We are closely following the successful ramp up of our plant in Hungary which will further fuel our growth in the continent and beyond.”

After leading the company’s European Operations for the last four years, Mathias Heimann will move into an advisory role at Apollo Tyres.