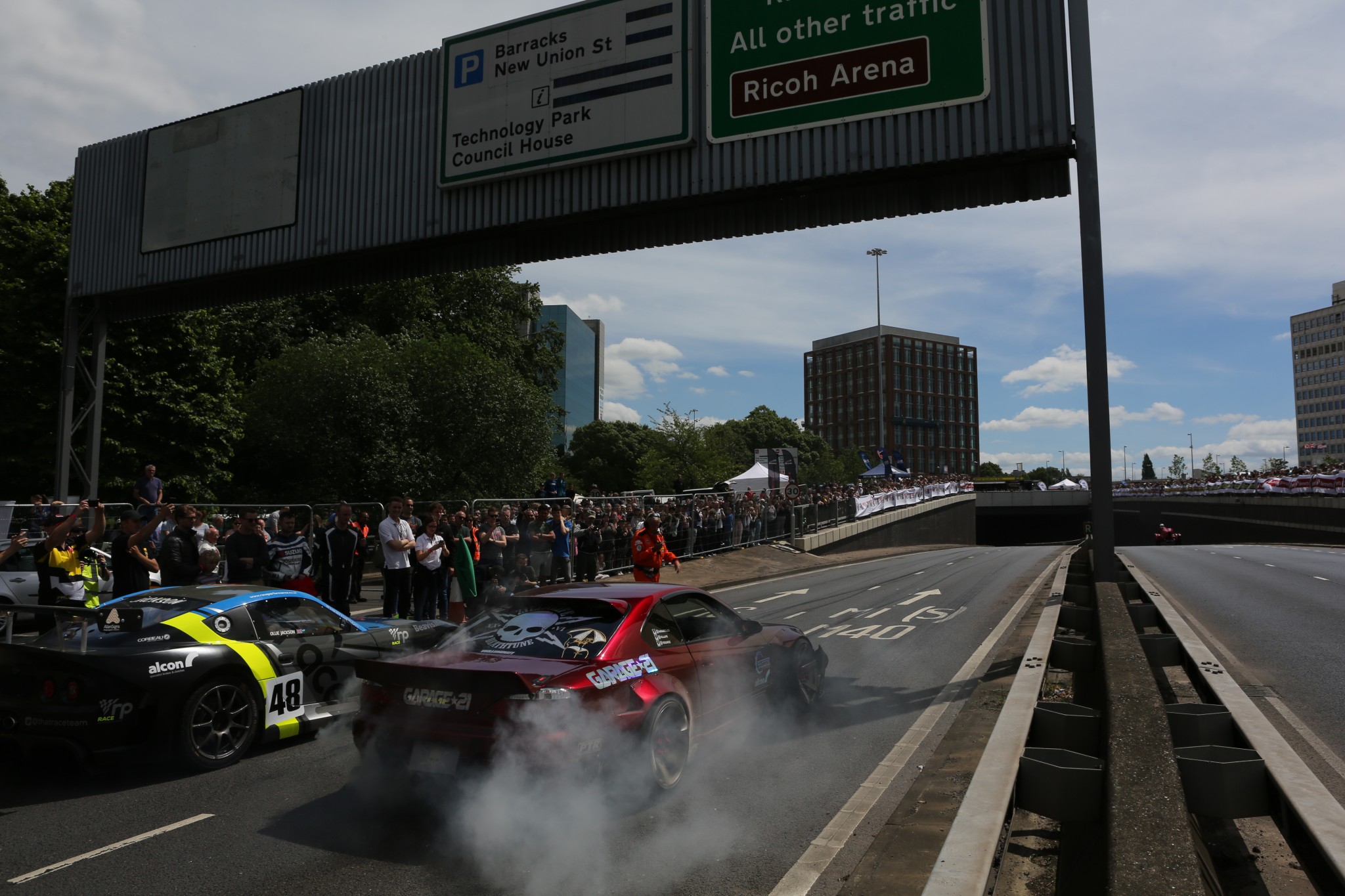 A quartet of Midlands based firms gave their backing to MotoFest Coventry 2018 by signing up as sponsors, including a new sprint circuit sponsor. First up on the roll call of Midlands based sponsors for 2018 was Toyo Tires, which has its UK head office in Rushden, unveiled as the new sponsor for the long track sprint circuit. Organisers said after this year’s festival that the MotoFest was the biggest and best ever after record-breaking crowds poured into the city to enjoy the first ever competitive motorsports staged at the event. Visitor numbers are thought to have topped last year’s high of 130,000.

For the festival weekend the unique MotoFest Coventry track created from the ring road was known as the Toyo Tires sprint circuit, as the tyre manufacturer became the latest high profile brand to support the UK’s largest urban motorsports festival.

Ahead of the event, Sarah Curtis, marketing manager for Toyo Tire UK said: “We are delighted to be involved in this year’s Motofest Coventry. Just as Coventry is at the heart of the automotive industry in the UK, from the streets to the track Toyo Tires has been at the root of popular car culture for many years.

“Being able to stand in partnership with this awe-inspiring public spectacle in the centre of the UK’s ‘Motor City’ is one of our most exciting ventures to date and provides us with a great amount of pride and belonging.”

After two days of competition, sprint legend Olly Clark – driving a Subaru Impreza – took the top step, setting the new official MotoFest Coventry track record of 69.64 seconds for completing the 1.1 mile Toyo Tires sprint circuit. Clark has now completed the sprint double having won the Goodwood Festival of Speed’s famous hill climb and its urban equivalent the Power Maxed MotoFest Coventry sprint competition – with the event trophy presented to him by festival director James Noble at a prize-giving ceremony on the final day.

As well as the competitive elements, the Toyo Tires sprint circuit also hosted the popular demonstration displays with an array of two-wheeled and four-wheeled machinery featuring as part of the weekend’s track action. In its home city, Jaguar presented a special 30-year anniversary celebration of the Jaguar XJR-9’s 1988 Le Mans victory, as the iconic car was reunited with its winning driver Andy Wallace for dynamic runs around the Toyo Tires sprint circuit. For two-wheeled fans one of the highlights was a ride-out from historic Coombe Abbey Hotel to the Toyo Tires sprint circuit on Saturday morning, with around 250 bikes creating one of the spectacles of the weekend as they officially opened the show with a parade lap.

In Coventry itself a trio of local companies signed up as event sponsors, with Medwell Hyde the newest and latest local firm to show their corporate support for MotoFest Coventry. Gary Hyde, managing director of Medwell Hyde said, “MotoFest Coventry is an incredible motoring festival right on our doorstep and we are very proud to be sponsoring the event this year.”

Alongside Medwell Hyde, one of Coventry and Warwickshire’s leading law firms Band Hatton Button renewed its sponsorship of MotoFest Coventry, having joined as a first time sponsor last year. For MotoFest Coventry 2017, the law firm sponsored the Band Hatton Button Arena, a new event area which featured the Get On bike experience in which anyone aged over 14 had the opportunity to try out riding a motorbike under the tuition of a qualified instructor.

The trio of Coventry firms was completed by AP Racing, global performance brake and clutch manufacturer, which signed up as the official brake and clutch supplier for this year’s event for the fourth consecutive year. AP Racing’s extensive motorsport and OEM accolades include being a key supplier to all levels of global motorsport formulae and major OEM Manufacturers.

David Hamblin, head of sales & marketing for AP Racing said: “We’re incredibly proud of our association with Coventry and are delighted to again support MotoFest Coventry, our hometown motoring festival and what is fast becoming one of the largest motoring festivals in the UK.”

As part of the sponsorship agreement for all three new sponsors, the respective companies’ branding featured across the MotoFest signage, the event’s online presence and marketing materials.

“It’s superb to have Toyo Tires involved and it seems fitting to have a company with such a strong motorsport heritage sponsoring the circuit in the year in which we stage competitive motorsports for the first time on the event’s unique ring road track.”

Following the event, Noble added: “The Power Maxed MotoFest Coventry 2018 was a record breaker, with our biggest ever number of visitors attending the event. We’re still crunching the numbers but expect the final totals to be well in excess of last year’s 130, 000 visitors to the festival weekend.”

“The sprint competition proved a phenomenal success with all the competitors expressing their delight at the opportunity to become history makers and take part in the first closed road motorsports competition on a UK city centre circuit in almost 30 years.

“It’s fitting that we have a true motorsports legend in Olly Clark as our first ever sprint trophy winner and new official lap record holder and we look forward to creating more legendary chapters in the Power Maxed MotoFest Coventry story as we take the event forward into the future.”

MotoFest Coventry 2018 is a two-day festival dedicated to the city’s motoring heritage, which this year took place on Saturday 2 June and Sunday 3 June. The festival included a range of automotive activities, from pop-up and demonstration events to static displays and fringe events at MotoFest, now the largest free urban motorsport festival in the UK.