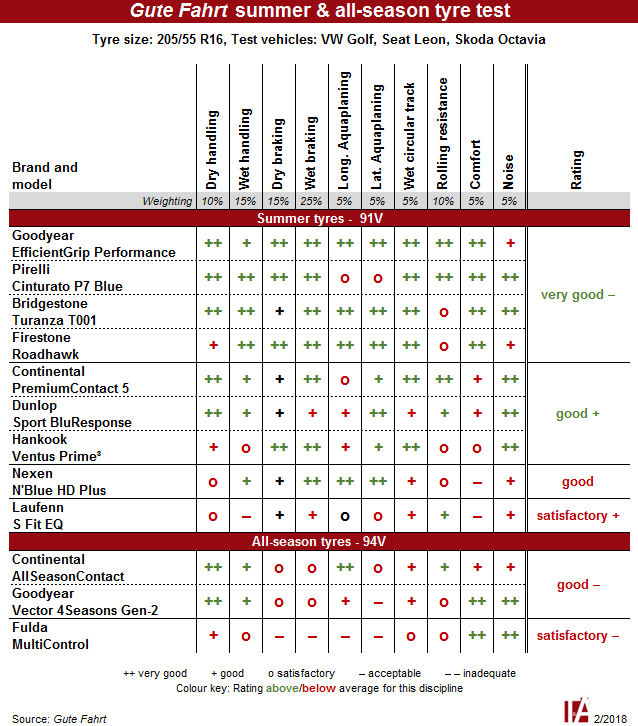 Summer tyres share the limelight with all-season tyres in the latest test from Gute Fahrt. The German car magazine has evaluated the merits of nine V-speed rated size 205/55 R16 summer tyres and, perhaps for those who’ve noticed that winter isn’t quite over yet, three all-season products that are also approved for speeds of up to 149mph or 240km/h. The tyres were mounted on Volkswagen Group cars – the VW Golf, Seat Leon and Skoda Oktavia – for testing, and this was carried out at the Pirelli proving ground in Vizzola, near Milan. Testing covered the usual criteria – braking and handling in the wet and dry, aquaplaning, wet circular track performance as well as characteristics such as rolling resistance, comfort and noise.

“Goodyear and Pirelli held the leading position, just ahead of Bridgestone and Firestone,” was the testers’ summary of the summer tyre test results. Taking top honours in the Gute Fahrt test were joint winners the EfficientGrip Performance and Cinturato P7 Blue; the former received top points for its low rolling resistance, which Gute Fahrt says was “without faults or flaws” thanks to a new, modified compound, as well as its wet grip, braking and dry handling. The Pirelli tyre was praised for its wet and dry handling and braking.

The winning pair narrowly beat the Turanza T001 and Roadhawk, and all four tyres received a rating of ‘very good -’ as well as the magazine’s recommendation. The Bridgestone and Firestone tyres shared third place. The Turanza T001 was described as “very balanced and unproblematic to drive at the limit,” and it behaved well in both the wet and dry. The presence of Bridgestone’s second-brand Firestone in this top-ranked group, an achievement made possible by its “constant top performance” was, according to Gute Fahrt, “one of the suprises of this test.”

The following trio had to accept a few more deductions. These tyres were given a rating of ‘good +’ and delivered performance that was free from any dramatic issues. The Continental PremiumContact 5 received mild criticism for its characteristics in the wet, including “light aquaplaning weaknesses.” The Dunlop Sport BluResponse behaved similarly to the Continental tyre while the Ventus Prime³ from Hankook was marked down for comfort characteristics and its rolling resistance performance. Certain wet criteria also posed an issue: “Grip is weak and the steering angle is large, and added to this is load change reaction,” commented the tester regarding the Hankook tyre’s performance on wet surfaces.

The Nexen N’Blue HD Plus received a rating of ‘good’ sans the additional plus. While the tyre delivered an overall “clean performance,” understeer was too high in the wet handling test and steering forces higher than necessary in the dry. Last-placed amongst the summer tyres was the S Fit EQ from Hankook’s second-brand, Laufenn. This received a rating of ‘satisfactory +’. The Gute Fahrt testers found the Laufenn tyre delivered “lateral weakness” and they criticised its “weakness in the wet and dry,” specifically understeer, large steering angle, sensitivity in deeper water and comfort deficits.

While the Laufenn tyre’s braking performance and aquaplaning resistance was satisfactory, two of the three all-season tyres tested performed better: The Continental AllSeasonContact and Goodyear Vector 4Seasons. Both were rated ‘good –‘ and gained a Gute Fahrt recommendation thanks to their convincing grip and stability, despite just moderate performance in the braking disciplines. The third all-season tyre, the Fulda MultiControl, is more oriented towards winter performance, and this was reflected in respectively longer braking distances and in lower safety reserves during aquaplaning. “By all means good in the dry, grip is weak in the wet and the steering angle large. Very good in regards to comfort,” commented the testers. Concluding, Gute Fahrt named the Continental and Goodyear tyres as “top all-season alternatives.”