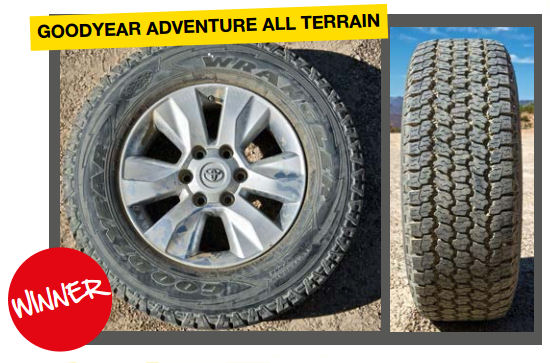 Although a new arrival in the market, Goodyear’s latest off-road tyre has gained a first tyre test victory with its coronation as king of Drive Out magazine’s all-terrain tyre test. The South African publication’s June edition compared seven products, and concluded that the Wrangler All-Terrain Adventure was “considerably better” than its predecessor (the Goodyear AT/SA) and a “worthy winner” thanks to its impressive performance both off and on the road.

In addition to the Goodyear tyre, the size 265/65 R17 test included General, BF Goodrich, Continental, Hankook, Yokohama and GT Radial brand products. All were tested on a pair of identical-spec Toyota Hilux 2.4 GD-6 SRX 4x4s and evaluated for braking on sealed and dirt roads, climbing and sidewall penetration. The Goodyear Wrangler All-Terrain Adventure delivered the best performance in two of these categories, conceding only to the BF Goodrich T/A K02 in the sidewall penetration test. The tyre was joint winner – together with its six rivals – in one category.

For Drive Out magazine’s tar road braking test, tester Jaco Kirsten performed three emergency stops from a speed of 100 km/h. Goodyear’s Wrangler All-Terrain Adventure gained full marks with an average braking distance of 35.8 metres. This was a stopping distance only 30 centimetres shorter than the second-placed Hankook Dynapro ATM RF10 but 3.6 metres ahead of where the BF Goodrich tyres came to a stop.

In the dirt road braking test, three emergency stops were made from 70 km/h. The Goodyear Wrangler All-Terrain Adventure shared first place for this test with the Yokohama Geolandar A/T-S, with the Toyotas shod with each respective product stopping in 28.0 metres. The BF Goodrich (28.2 metres) and Hankook (28.5 metres) came to a standstill not far behind, however the Wrangler All-Terrain Adventure finished 3.2 metres ahead of the last-placed GT Radial Adventuro AT

The climb test involved deflating the tyres to 1.5 bar (21.8 psi), engaging first gear, low range and negotiating an obstacle that began at 30 degrees and ended at about 40 degrees. Tyre pressure was subsequently increased in increments, with full marks given to any tyre capable of climbing the slope at 2.2 bar (31.9 psi). To the Drive Out tester’s surprise, all tyres succeeded in this category, and thus received full points.

Sidewall penetration tests are generally regarded as one of the most important in the 4×4 category as they examine how much resistance a tyre provides against a sharp object jabbed into the shoulder part of the sidewall. While the Drive Out tester expected the BF Goodrich T/A to stand out from the rest in this particular category, he stated that “the big surprise, however, was just how good the Goodyear Adventure did.” Goodyear’s engineers designed the Wrangler All-Terrain Adventure with an ultra-strong Kevlar fibre overlay. This reinforces the tread, offering the ruggedness needed to prevent punctures and cuts. This feature is supported by Goodyear’s Durawall Technology, improving the resistance against punctures and cuts essential in the sidewall area. While the BF Goodrich tyre required 196.6 kPa of pressure before the sidewall was penetrated and the Goodyear tyre 176.6 kPa, the category wooden spoon went to the Continental CrossContact AT, whose sidewall was punctured at just 110 kPa.

Adding up the respective scores in each of the four categories gave the Goodyear Adventure All Terrain a total of 97.46 per cent, handing it victory ahead of podium rivals the BF Goodrich T/A K02 (93.07 per cent) and Yokohama Geolandar A/T-S (92.31 per cent).

“This is an all-terrain test and that’s why the Goodyear Adventure really impressed us,” concluded Drive Out magazine. “It not only won the tar road braking test but was also the joint winner for the dirt road braking test, together with the Yokohama Geolander A/T-S. And with the sidewall penetration test it was also not far behind the tough-as-nails BF Goodrich. In addition, the new Goodyear also has Kevlar, a material used for bulletproof vests, in the tread. That’s why we believe this Goodyear is a worthy winner of our all-terrain shootout.”