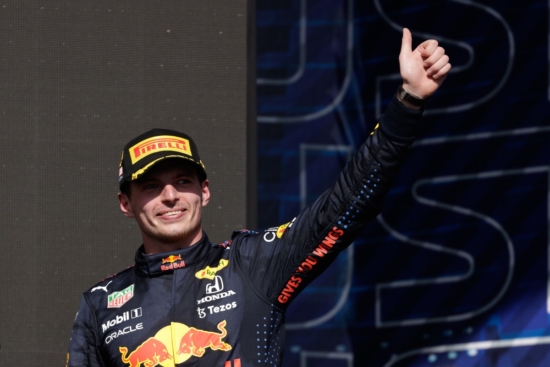 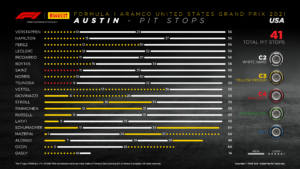 Red Bull’s Max Verstappen opened up a 12-point gap at the top of the Formula 1 Drivers Championship after an intensely tactical two-stop race against Mercedes’ Lewis Hamilton at Circuit of the Americas, Austin, Texas. Verstappen switched from the Pirelli P Zero Yellow medium tyre to the P Zero White hard tyre on lap 11, with a successful ‘undercut’ to gain the lead from his rival, who stopped three laps later. Mario Isola – head of F1 and car racing at Pirelli said that the two drivers had used “exactly the same” pre-race tyre allocation in different ways to produce a “thrilling finale between two drivers absolutely on top of their game.”

Verstappen stopped before Hamilton in the second round of pit stops too; the Mercedes driver went eight laps longer to leave himself much fresher hard tyres at the finish, allowing him to race the Red Bull driver hard over the final laps. There was less than a second between the two cars at the chequered flag.

While Verstappen and Hamilton both adopted the same medium-hard-hard strategy, Red Bull’s Sergio Perez in third (who only had one fresh set of hards available) did two stints on the medium followed by just one on the hard.

Pirelli said that wear and degradation were quite high and at the same significant levels seen in free practice at COTA. The demanding track is noted for its bumps, aggressive surfaces and very fast first sector. Despite some drizzle earlier in the day, conditions were warm and dry for the race, but with some wind too. The race got underway with 31 degrees centigrade ambient and 39 degrees of track temperature.

Every driver began the race on the P Zero Yellow medium tyre, with the exception of Ferrari’s Carlos Sainz and AlphaTauri’s Yuki Tsunoda on the P Zero Red soft (which they had used to set their best Q2 times on Saturday).

Isola said: “Tyre wear was high as we expected on this hot and abrasive circuit, which led to nearly everyone choosing the medium to start the race on and then focussing on the hard as the main race tyre. This stood up extremely well to the demands on it, with some long stints that helped to set up a thrilling finale to this race between the championship protagonists.

“Both Max Verstappen and Lewis Hamilton had exactly the same tyre allocation left before the race but used it in very different ways, with Hamilton making the most of his younger tyres at the end, and Verstappen capitalising on the track position gained by his ‘undercuts’. The result was a fantastic strategic duel that led to a thrilling finale between two drivers absolutely on top of their game, managing their tyres perfectly.”

The 2021 F1 season still has five more races scheduled, with visits to Mexico and Brazil preceding three races in the Middle East to conclude this year’s close-fought championship. In 2022, Pirelli will supply 18” tyres to the championship, marking a major break with the tyre allocation for the previous decade of the exclusive supplier’s tenure.