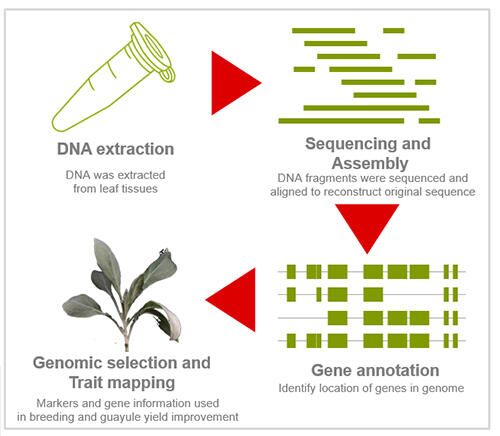 The dream of securing natural rubber supplies in the vicinity of production facilities and reducing dependency upon hevea rubber plantations has preoccupied Bridgestone Corporation for the past decade, with the company examining the suitability of both Russian dandelions and guayule. Early in 2018 it announced a collaboration with genomic big data company NRGene to advance the commercialisation of guayule, and today Bridgestone shared the results of this four-year project. The combined effort, which focused on analysing DNA to allow more efficient use of inherent genetic diversity and thus breed highly productive varieties of guayule, has resulted in the partners successfully assembling a specific guayule genome.

The team assembled the genome using NRGene’s DeNovoMAGIC system. It gives the partners a complete description of the genome sequence and all its genes. This information will allow for additional genomic diversity when identifying the genetic basis for important traits such as rubber percentage.

Furthermore, Bridgestone developed mapping populations that allowed NRGene to construct a genetic and physical map by successfully identifying the correct order of DNA fragments. These maps enable Bridgestone to use the information contained in the genetic code to assist in its breeding efforts. The joint work resulted in the successful construction of pseudochromosomes (molecules that contain most of the chromosomes’ information) using an approach that combines multiple genomes. Bridgestone says this achievement marks “a historic milestone in guayule research.”

“The collaboration between Bridgestone and NRGene will provide important advances for the future of the automotive and rubber industries,” states William Niaura, director of Innovation at Bridgestone Americas. “The combination of our previous work with the sequencing and assembly of the hevea genome and our current work with guayule uniquely positions Bridgestone to utilise these resources for comparative genetic analysis of the rubber biosynthetic pathways and become a leader in the genetics and improvement of rubber-producing plants.”

At home in arid environments

Native to the desert regions of the southwestern United States and northern Mexico, guayule is a shrub capable of producing natural rubber that can grow on marginal farmland with minimal fertiliser inputs. Guayule has the physical and genetic characteristics of a desert plant, tolerating arid environments and demanding less water than other commercial crops grown in the region. Bridgestone notes that this is important as the agricultural sector is under pressure to find ways to address dwindling water resources in the south west of the USA, and guayule may represent a solution that allows for crops while reducing water usage.