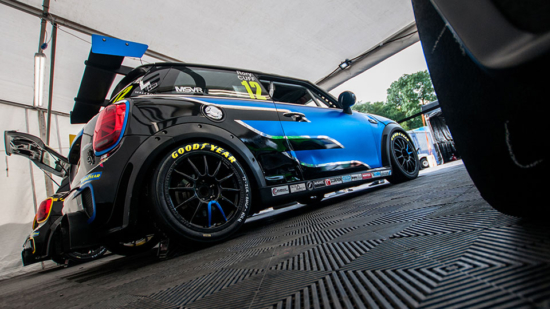 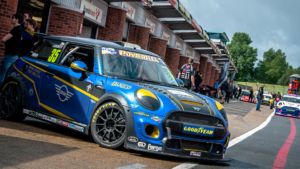 The Mini Challenge returns this weekend for its second set of races since its Covid-delayed start at Donington Park (1-2 August). The JCW field is linked to the British Touring Car Championship, both as a support series for the first time in 2020 and by virtue of its switch from Dunlop rubber to European sister brand Goodyear, which supplies the BTCC. The move to Goodyear, in the final year of its 2017 penned Dunlop supply deal, signifies the continued realignment of the Goodyear brand within motorsport. Having already returned to the international stage with top-flight series like the FIA World Endurance Championship, Goodyear wants to expand its presence in national series too. The Mini Challenge JCWs run on a variation of Goodyear’s new Eagle F1 SuperSport slick tyre range. The company stresses the strength of this move for the development of competitors looking to make the step up to the headline BTCC series.

Ahead of the first round, Mini Challenge promoter Antony Williams said: “It’s great to be following in the wheel tracks of the British Touring Car Championship by being the only other British championship to run on Goodyear tyres during 2020. At the Mini Challenge we’re proud to be considered as the perfect feeder series to touring cars, and having similar, ultra-high-performance tyres will only strengthen that link. The 2020 season is shaping up to be one of the most exciting in the history of the Mini Challenge.”

Goodyear Tyres manager Mickey Butler added: “The Mini Challenge has grown in both scale and prestige over the last decade to be the definitive stepping-stone to the BTCC. We are proud to continue working with the championship as part of the Goodyear comeback to top-level motorsport.”

Davanti-supported Zelos to seek further points in second round

Zelos looking to establish himself after rookie success 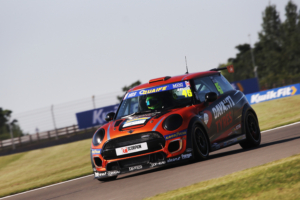 Reigning rookie champ Dan Zelos, who is supported by tyre brand Davanti, is racing with team Exceler8 to try to establish himself among the series’ front runners this year. At Donington Park he was narrowly edged off the podium in race one, seized his chances in race two to bag second and rounded off with a solid sixth place. Overall he is now in fifth overall in the driver standings. Davanti states that Zelos’ performances typically improve as the season progresses. So his strong start makes him one to watch going into the next round of races at Knockhill.

In race one Zelos looked set for third until a gutsy pass on the penultimate lap by Lewis Brown pipped him to the rostrum. In race two he was more aggressive, keeping the chasing pack in check as he clinched his first season podium place as runner-up.

“It was an exciting race,” Zelos said. “I got more involved. I wanted to concentrate on catching Nathan Harrison but Lewis wasn’t going to give me a second to breathe. The whole race he was in one mirror, in the other mirror. I would pull away at the start of the lap and by the end he’d caught up again! But the car felt good. We’ve been lucky to have the support of our sponsors, including Davanti Tyres, during all this uncertainty to help us get to the line in competitive shape.”

The reverse grid race three start was frantic and saw Zelos squeezed onto the grass, however he recovered and cut through the field to earn sixth place.