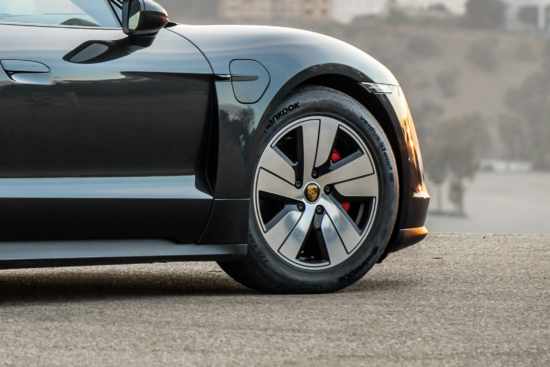 “We are proud to equip the first fully electric sports car from Porsche with our tyres. Providing the original equipment for sporty premium vehicles is already a tradition at Hankook. Our engineers have shown that with our products we are well prepared for the new demands in the field of electric sports cars and are therefore well positioned for the future,” says Sanghoon Lee, president of Hankook Tire Europe.

Hankook has adapted the tread pattern of the Ventus S1 evo 3 to reduce annoying tyre noise. In the absence of engine noise – the electric engine is about three decibels quieter – the perception of tyre noise within the vehicle is enhanced, making it a key characteristic. Tyres for electric sports cars in particular must also meat heavy performance demands. Hankook has reinforced the bead of the Hankook Ventus S1 evo 3 with so-called bead-packing technology for the electric vehicle version. It also has high lateral stiffness for precise handling at high speeds.

“With the tyre development for the Porsche Taycan, our development team has moved into completely new dimensions and we are proud of the result. For the original equipment engineers, such a development project represents a special challenge – because solving the conflict of objectives for optimizing the various performance criteria in an e-vehicle like this high-performance sports car requires the highest level of expertise and the latest technologies,” explains Dipl.-Ing. Klaus Krause, head of the European research and development centre at Hankook.

Hankook’s developers have also discovered an optimally balanced vulcanisation process for the tyre compound to meet the needs of electric vehicles like the Porsche Taycan. This ensures the right balance of temperature, time expenditure and pressure. As a result, Hankook says theVentus S1 evo 3 ev achieves 30 per cent greater durability compared to a standard tread compound. Abrasion resistance has been improved by 5 per cent compared to the conventional model and rolling resistance has been improved by 13 per cent overall.