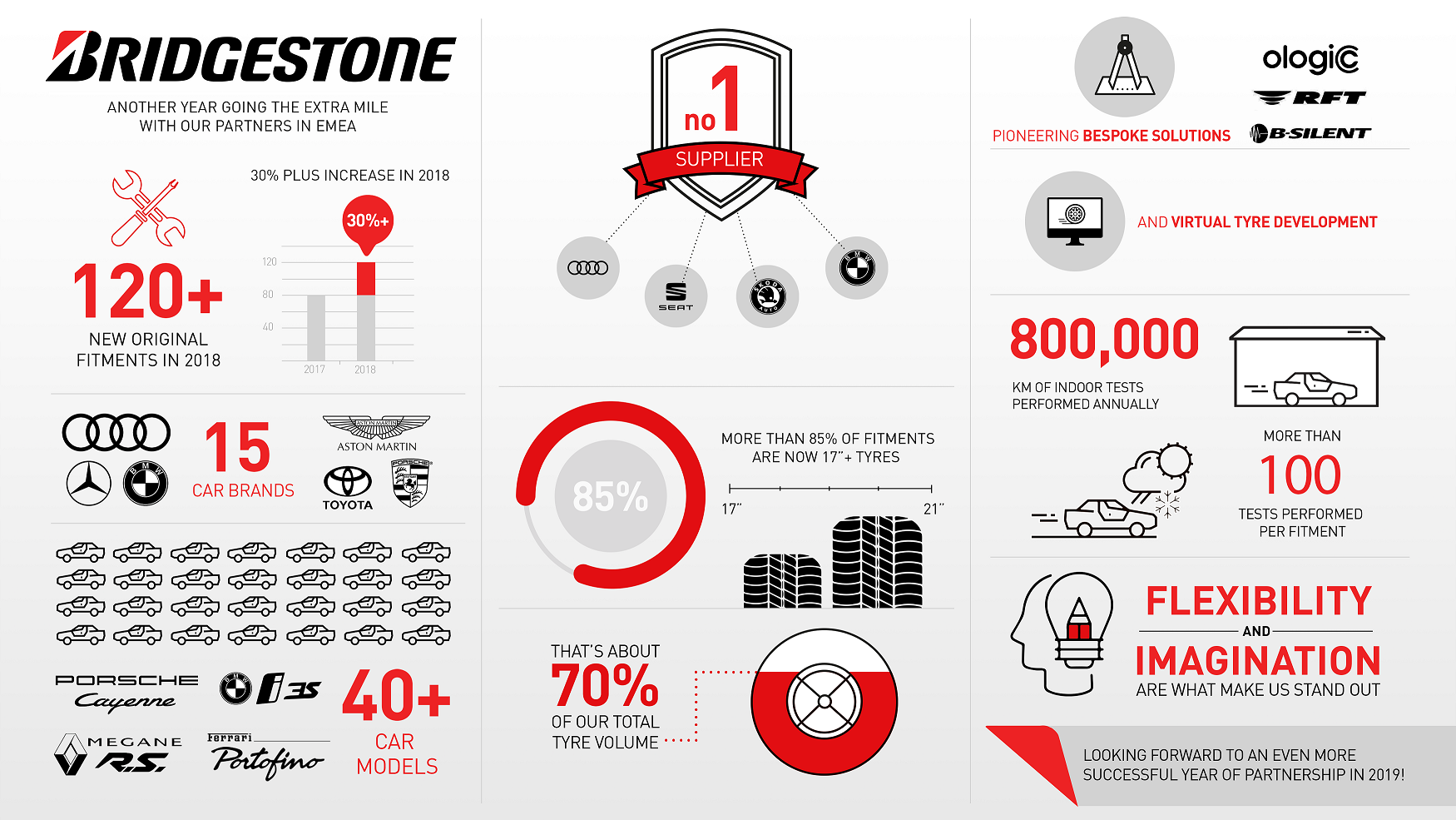 In addition to these brands, Bridgestone continues to serve as a primary supplier of Audi, Seat, and Skoda in its role as strategic partner of the Volkswagen Group. At Audi, the volume of fitments has doubled over the course of the last five years. Bridgestone has also taken a strong position with BMW, proven by the extensive choice of Bridgestone fitments for the BMW 3-Series, the BMW 7-Series, BMW X5/X7 and BMW Z4.

The tyre manufacturer also pointed to the wide variety of models running on its products, including electric/hybrids such as BMW i3s, Toyota Corolla, the universal Audi A6 Allroad, tourers such as the Opel Insignia, the BMW 8-series, as well as the luxury Porsche Cayenne and sport cars including the Ferrari Portofino and the Renault Mégane RS and RS Trophy. More than 85 per cent of its fitments are now for tyres with a diameter of 17” or greater.

Bridgestone’s technological advances in recent years include B-Silent, ologic and improved Run-Flat Technology – these have been engineered “to respond to the requirement of the OEMs,” the company adds. Cutting-edge tyre design Audi Q3technologies such as low-wear Nano Pro tech, highly dispersible Silica compounds and newly designed patterns, cavity shapes and optimised skin depth as well as innovative mixing processes, allow Bridgestone to match the tyres’ characteristics and the vehicle’s setup.

Partnerships for the future

According to Mark Tejedor, vice president of original equipment at Bridgestone EMEA, the tailored approach allows Bridgestone to optimise the unique character of any vehicle. “In an industry in rapid transformation, where vehicles are becoming more and more CASE – connected, autonomous, shared and electric – Bridgestone delivers new solutions and technologies answering car manufacturer’s most demanding challenges. The tyres we are developing today are aimed at meeting needs for the next two to five years and far beyond.”

Partnerships and co-creation have resulted in more than tailored designs, he continues. “It’s enabled us to take a step in a new direction that leads decisively into the future,’ says Tejedor. ‘We are creating new tyres as well as mobility solutions and services that are more efficient and better adapted to vehicles and new automotive developments than ever before. By doing this, we will keep drivers going, no matter what.”