You are here: Home1 / News2 / Product News3 / A tyre for every destination – 8 all-season campervan tyres test...

A tyre for every destination – 8 all-season campervan tyres tested 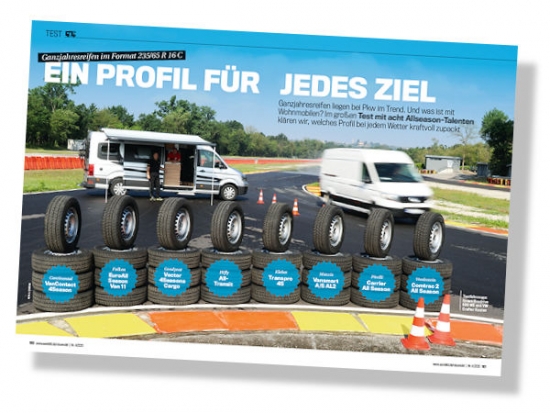 All-season tyres offer safety in a wide range of weather conditions and have gained a lot of traction within the passenger car segment. But what about campervans – is all-season a good choice of tyre for those hoping to squeeze in a belated post-lockdown holiday? Auto Bild Reisemobil fitted eight sets of all-season campervan tyres to a VW Crafter with a 600 kilogramme payload and put them through their paces to check performance in dry, wet and snowy conditions.

The winner is Continental

Only one of the 235/65 R16C tyres received Auto Bild Reisemobil’s top ‘exemplary’ rating – test winner, the Continental VanContact 4Season. The testers report that the Continental tyre copes well with the summer-winter balancing act. Its performance on wet and snowy surfaces is impressive, and the tyre offers good steering precision and low rolling resistance. Comfort was only average.

Runner-up in the German publication’s test was the Goodyear Vector 4Seasons Cargo. Its performance wasn’t far behind that of the Continental tyre, and it also offered good comfort levels. But Auto Bild Reisemobil notes that braking distances were slightly lengthy on dry surfaces.

The two best-performing tyres in the test were also the two most expensive products – the testers note that versatility has its price.

The rest were ‘satisfactory’

Maxxis Vansmart A/S AL2: Auto Bild Reisemobil calls the Maxxis candidate an “affordable all-season (tyre) with balanced levels of performance”, and the testers praised its convincing winter characteristics. They noticed some steering delay on dry surfaces as well as slightly extended braking distances in the wet. Comfort wasn’t exceptional, either.

Pirelli Carrier All Season: The Pirelli tyre provided high levels of performance on wet and dry roads, and the testers commended its safe aquaplaning characteristics. It let itself down in severe winter conditions, with mediocre traction and lateral control on ice and snow.

Hifly All-Transit: Auto Bild Reisemobil called this an “affordable all-weather profile with decent handling qualities in the snow and low drive-by noise.” The testers reported understeer and extended braking distances in the wet, however, as well as delayed steering response.

Falken EuroAll Season Van 11: The Falken tyre shared seventh place with its Hifly rival. The testers considered it good on snow, with short braking distances and good lateral control, as well as safe aquaplaning. They also reported several issues, including limited grip and understeer on wet and dry surfaces.

No Michelin tyre in test

Although represented by its Kleber brand, the Michelin name was notably absent from the Auto Bild Reisemobil text. The publication explained that it intended to include the Michelin Agilis CrossClimate in the comparative evaluation, however this tyre isn’t available in the tested size in a specific camping version – which can be identified by the letters ‘CP’ on the sidewall. The Agilis CrossClimate tyre produced in the tested dimension was therefore developed for van use rather than for campervans. 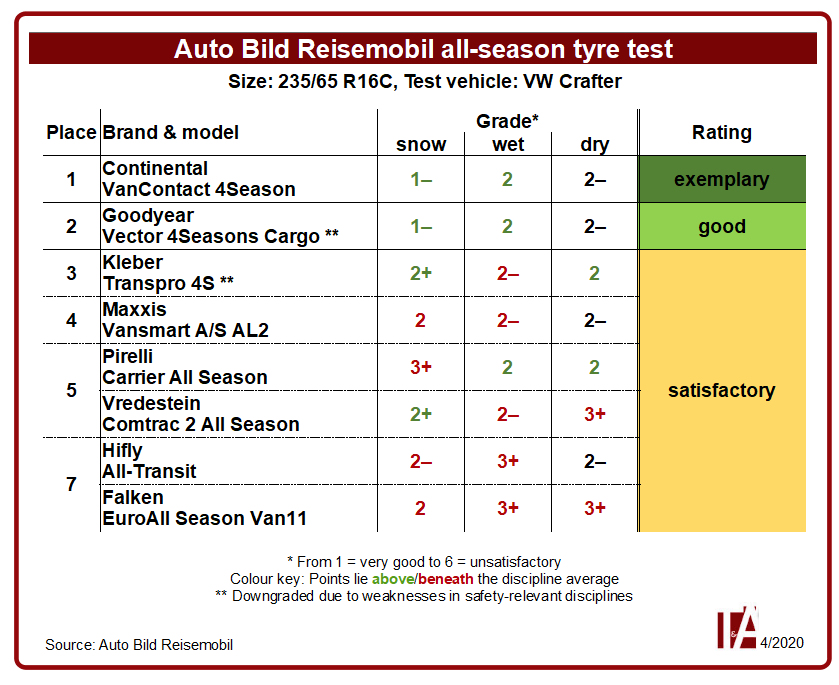