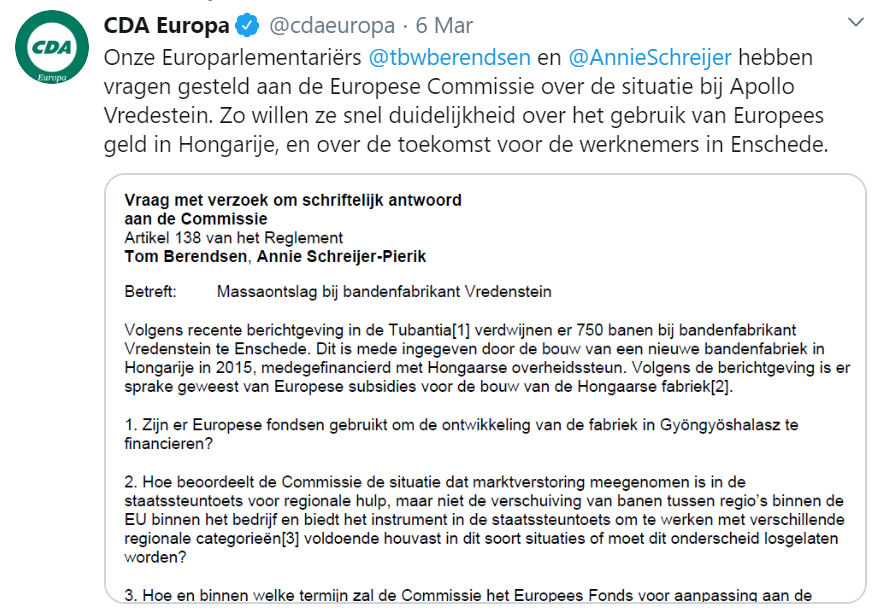 Some 750 jobs will be lost due to restructuring at the Apollo Vredestein tyre plant in Enschede, the Netherlands over the next couple of years, and Dutch politicians want to know if the European Union has contributed in any way to the chain of events that will lead to some of Enschede’s tyre production relocating to Hungary. MEPs from Dutch political party the CDA (Christian Democratic Appeal) have asked the European Commission to clarify certain points.

Firstly, they’ve asked the European Commission to confirm whether or not European subsidies helped the development of the Apollo Tyres (Hungary) Kft plant in Gyöngyöshalász, Hungary.

Even if European funds didn’t support the project directly, the European Commission gave its blessing to the 95.7 million euros in financial support that Apollo Tyres received from Hungary’s government. The Commission endorsed this regional investment aid in September 2014, claiming it was “in line” with EU state aid rules. According to a statement released at the time, the Commission “found that the aid granted by Hungary favours regional development while any distortions of competition will remain limited.”

Berendsen and Schreijer-Pierik want to know why the Commission looked at potential distortions of competition when making its decision, but didn’t consider the issue of job movement within the European Union.

“We want to know from the European Commission how things are going,” states the CDA. “In our view, relocating regional jobs within the EU should not be encouraged by state aid. We also want to make sure that no EU funds have been used.”

The two MEPs have also sought clarification about how the European Commission intends to utilise the European Globalisation Adjustment Fund (EGF) and other sources to support the affected Apollo Vredestein workers in Enschede, and over what period of time this support will be given.

Apollo Tyres Ltd.’s announcement about the Enschede plant last week didn’t entirely come as a surprise. Almost a year and a half ago, the company’s chief financial officer said car tyre production there would be reduced in favour of capacity in Hungary. Gaurav Kumar stressed, however, that this measure shouldn’t be viewed as a capacity transfer; he explained that capacity within the Enschede plant would simply be utilised for other segments.

Kumar then shared during an earnings call last May that capacity in Enschede was expected to decline year-on-year in the 12 months to 31 March 2020. He added that there “would not be a further ramp down” of capacity in the Netherlands, anticipating that capacity for passenger car tyres would remain at just under 4 million units per annum for at least the next three years.

According to Apollo Vredestein, approximately 1,500 people are currently employed at the Enschede site, which means half the workforce will lose their jobs. Of the current 1,500, around 1,100 work in production and 400 in other departments. The tyre maker hasn’t specified how many of the 750 or so job losses will come from the production side of operations, but we expect that the majority of layoffs will occur in this area.