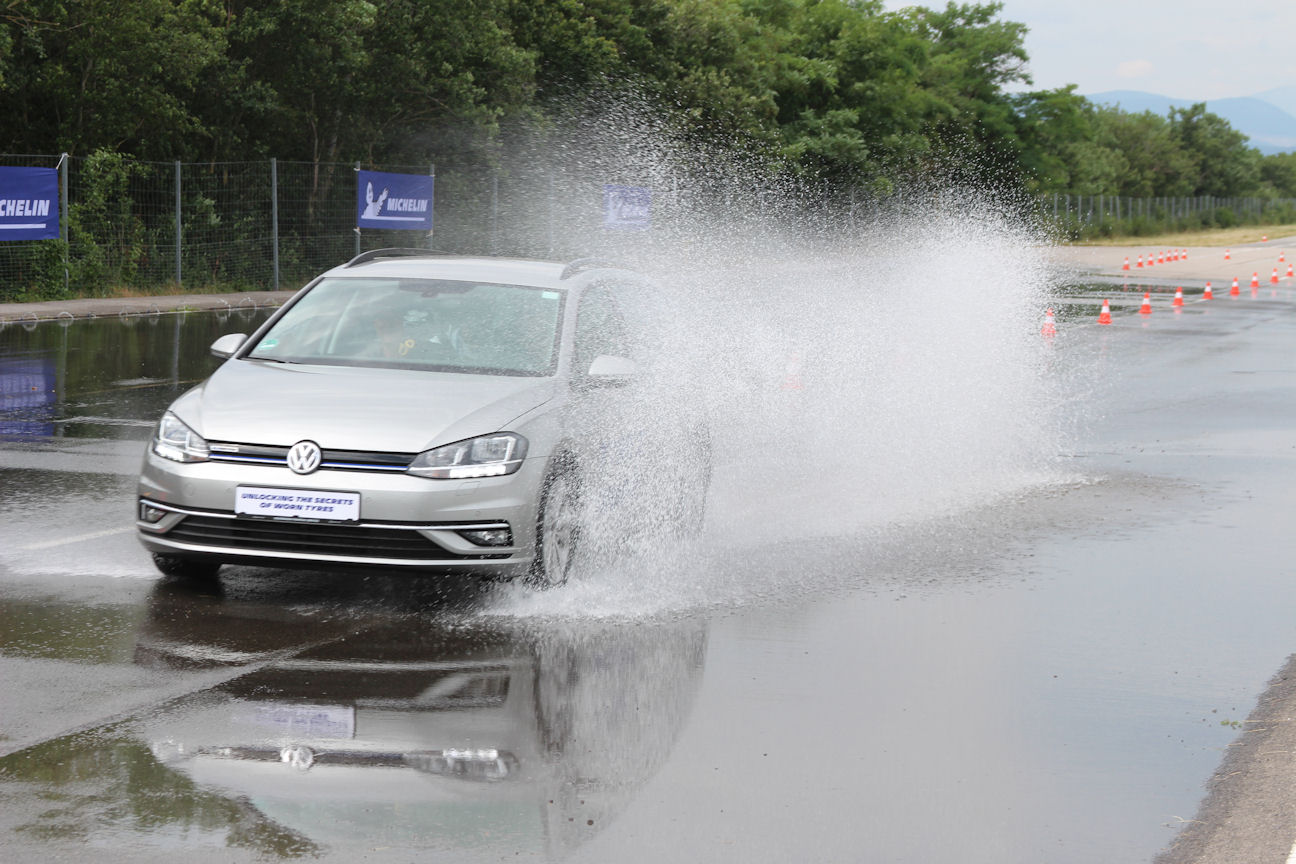 The debate over how much tread depth is sufficient and recommendable has been going on for years. While some tyre makers, associations and motoring groups support changing the legal minimum tread depth to 3mm as a move towards greater peace of mind, Michelin has been a vocal advocate of not only keeping 1.6mm the legal minimum but of actually using tyres right down to this tread depth. It is also one of a growing number of parties calling for legislation that informs consumers how tyres perform when worn. Earlier this month, Michelin shared the latest developments in the quest for ‘Long Lasting Performance’.

First, a summary of Michelin’s stance on the matter so far. The tyre maker has spoken out against “planned obsolescence” within the tyre industry – the recommendation to remove tyres at a 3mm tread depth – for the past three years. It sees enormous financial and environmental benefits in keeping tyres mounted to 1.6mm – 7 billion euros and 6.6 million tonnes of CO2 saved each year in Europe alone. And it has presented a compelling argument, backed by accident statistics and comparative testing, that driving on tyres until 1.6mm can be safe.

Can be safe, but isn’t necessarily so. Our initial reaction to the Michelin Long Lasting Performance campaign was it didn’t adequately point out the caveat that not all tyres offer safe levels of wet grip with just 1.6mm of tread remaining. Furthermore, we wondered about the guesswork involved when predicting a worn tyre’s wet performance – good wet grip when new is no guarantee of safe performance when worn.

Michelin is well aware of these issues. “Tread depth is not a reliable indicator of braking performance on wet roads,” comments Fabienne Goyeneche, EU affairs manager within the tyre maker’s Public Affairs department. “Nor is a tyre’s braking capacity when new a good indicator of how it will perform when worn. There is no obvious correlation for either.”

Happily, the Long Lasting Performance campaign has evolved beyond its initial remit of lobbying to retain the 1.6mm legal tread depth limit instead of tyre replacement at 3mm or 4mm. The original message remains, what’s changed is a greater emphasis towards informing motorists about how their tyres will behave in their very worst rather than just their very best condition. And while the campaign still provides a platform for promoting the strengths of Michelin tyres, at the same time it strives to benefit all motorists, regardless of the tyre brand they drive on.

Work towards a worn testing regulation

What does Michelin want to achieve through its Long Lasting Performance campaign? One key aim is the introduction of a test for wet grip on tyres whose tread depth has reached the legal minimum – and it seems Michelin will see this goal reached sooner rather than later.

Goyeneche reports that much is happening to this end at a European and international level. The European Commission’s revisions to the General Safety Regulation are expected to be adopted this autumn. “This revision introduces the idea of testing tyres at worn stage,” she comments. These revisions also enhance the congruity between European Union and United Nations Economic Commission for Europe (UNECE) regulations. Future proposals coming from the UNECE will be adopted within Europe.

In March the UNECE created a working group tasked with determining what a future test or regulation for wet grip on worn tyres (rolling resistance and noise performances aren’t being looked at, as both improve as a tyre wears) would look like. The working group, IWG Wet Grip on Worn Tyres, is chaired by France, co-chaired by the European Commission and contains representatives from Europe, Japan and China.

“Any country can join (the IWG), and the tyre industry is of course represented, as are OEMs and importers,” says Goyeneche. “Today work is in progress and we cannot assume what the conclusion will be. Nevertheless, Michelin welcomes this as very good progress for the future.”

The IWG aims to present a working document for adoption by January 2021, and the European Commission has set a deadline of July 2023 for developing a stable test method. Pierre Robert, vice president of research at Michelin, doesn’t think it’ll be difficult for the IWG to meet the deadline: “The EC says it will impose a regulation if a defined test isn’t working by that time. But I am sure that all the people working together in the IWG will come to an agreement. A lot of discussions are going on, but very positive ones. Our belief is that it isn’t so complex.”

Tyre ageing a small effect on changes in performance

Robert says the IWG will likely choose 1.6mm as the tread depth for testing worn tyre wet grip. New tyres whose tread has been buffed down to 1.6mm will be used for test purposes. This raises a question – do new tyres buffed to 1.6mm behave like tyres that have worn during years of service? The short answer is yes.

Michelin is one of a number of tyre makers that have researched the parameters for testing worn tyres. “There is general agreement that the main effect explaining reductions in wet grip performance is a decrease in tread depth, a diminishing void ratio. The ageing of materials only plays a very minor role.” Robert shares that from a typical 25 to 30 per cent decrease in wet grip over a tyre’s lifetime, tyre ageing (using five years as a reference) accounts for no more than five per cent. “You capture most of the effect of reduced wet grip with buffing.”

One purpose of a regulation covering worn tyres is to inform consumers about wet grip performance over a tyre’s lifetime, but OEMs will also increasingly rely upon the information it provides. Tomorrow’s vehicles, particularly connected and autonomous cars, will certainly contain more safety features than current models. Fabienne Goyeneche notes that although it “seems counterintuitive”, research suggests that safety features which all but eliminate the driver’s role in a collision will rely upon a tyre’s braking capacity even more than is currently the case.

“OEMs are listening to us and I think they’re very concerned about this tyre safety feature,” adds Pierre Robert. “For them, it is very important to know how a tyre will perform when worn, and for this reason, OEMs have a strong interest in a regulation.”

Michelin hopes a new regulation will also deter a practice sometimes encountered during tyre development, that of emphasising particular performance criteria – Pierre Robert mentions rolling resistance and wear – with little regard to how this will later influence the tyre’s safety performance.

“Tyre design is a choice,” Robert stresses. “There are three key factors for long-lasting performance – ingredients within the compound, the presence of u-shaped or expanding grooves in the tread pattern and creating a rounded or bow-shaped contact patch. Everybody in the tyre industry knows these things, it’s purely a matter of choice if these design features are used or not.” Robert is less than impressed by tyre makers who ignore these rules in order to meet a specific performance goal: “It is super easy to reduce rolling resistance while compromising safety aspects. But we don’t think these are fair designs.”

An aim of testing and rating tyres for wet grip at 1.6mm tread is to encourage tyre makers to adopt designs that deliver safe performance right down to the legal tread limit. But what would this mean for the tyre trade? Would swapping tyres over at 1.6mm instead of at 3mm decrease their revenues? Pierre Robert doesn’t believe so.

“Tyre dealers’ initial reaction may be ‘I will sell fewer tyres’, but they sell more than tyres. They are delivering mobility, and they have an opportunity to sell more service.” He points to the trend towards placing vehicle maintenance in the hands of experts and suggests that garages should promote the practice of rotating tyres to maximise tyre life. This is a common procedure in the USA but still fairly rare here. “There is the opportunity there to use the tyre’s full potential. People are very focused today on saving resources, so if you can get more from your tyres it is good for your pocket and good for the environment.”

Concerns about reduced tyre sales may be redundant, anyway. Nothing stipulates how much tread a new tyre must come with, and a favoured means of cutting rolling resistance is to manufacture tyres with less than the ‘standard’ 8mm of tread. Certain current Michelin models feature around 6.5mm to 7mm of tread when new, which means approximately 5mm of tread will be worn away during their lifetime – this is no different from fitting a tyre with 8mm of tread and replacing it at the 3mm level recommended by some manufacturers. Except that the tyre has less valuable rubber on it when discarded.

The right way to test

Summing up, Pierre Robert stresses that Michelin doesn’t seek any change in the current EU wet braking test, which involves measuring the distance required to decelerate a vehicle from 80 to 20 km/h on a standard road surface with a water depth of 1 mm: “A test for worn tyres should be based on this as it meets real conditions that motorists may encounter on the road.

“But we also need to test wet grip when worn, and for us worn always means 1.6mm, even for tyres with 3PMSF certification,” Robert continues. “This is the right way to test, you can get good performance with 1.6mm. We are very confident about the improvements the test will bring. At the end of the day, what is important to us is delivering more value to the customer. And to develop better, cleaner, safer mobility. It’s a good step.”

A consensus over the 1.6mm versus 3.mm tread question probably won’t be reached even after the introduction of a regulation for wet grip testing when worn. Each side offers arguments worth listening to. But in any event, a measure that better informs us about tyre safety performance must be seen as a positive development. And if 1.6mm’s detractors accuse Michelin of promoting a position that favours its tyres – tyres that still grip in the wet when worn – then we can only hope Michelin is big enough to take such ‘criticisms’ on the chin.

Fabienne Goyeneche: Michelin welcomes the development of a worn wet grip test as “very good progress for the future”

Pierre Robert shares the results of Michelin’s test of wet braking performance for 13 brands of European market tyres. It tested the tyres when new, with 3mm tread & with 1.6mm tread, and found no correlation between new and worn performance

Even with only 1.6mm of tread, this Michelin Primacy 4 retains its four u-shaped grooves & much of its siping

When this mid-range tyre reaches 1.6mm the v-shaped tread grooves provide less water drainage, while its sipes and some grooves disappear entirely